Nicky Morgan, Education Secretary and Minister for Women and Equalities, launched a report on women's leadership in UK universities at Imperial today.

WomenCount: Leaders in Higher Education 2016, authored and presented by Norma Jarboe OBE, considers women’s representation in senior leadership positions across the university sector and tracks progress made since the 2013 report on the same topic.

We cannot be complacent. This is not a case of ‘job done’

It concludes that the higher education sector is making steady progress towards gender balance, and highlights an encouraging rise of women’s representation on governing bodies and an increase of gender balanced boards.

However the report notes that the two most senior roles in university governance – the Chair of the Governing body and the Vice-Chancellor - are much further from parity, with women holding only roughly a fifth of these roles.

Speaking at the event, Nicky Morgan MP said: “The question we face is not why we should have more women in governance and senior leadership roles, but how we should achieve it.

“Female leaders in our universities and colleges act as powerful role models.”

“There are some fantastic examples of inspirational female leaders in the higher education sector. Professor Alice Gast is a great example. She’s the first woman to be President at Imperial, and her academic pedigree is beyond question – spending time at prestigious institutions like Princeton and Stanford, not to mention of course her current post here at Imperial, one of the best universities in the world.”

Ms Morgan also noted that there was a clear business case for improved gender parity in leadership positions: “Bringing women into roles where glass ceilings previously existed gives us the opportunity to harness our entire pool of talent, rather than just a portion of it.

“Unlocking that potential gives Britain and our institutions the best chance to succeed.”

Highlighting the work still to be done, she said: “While the report highlights the good progress that has been made, overall women are still underrepresented in senior leadership roles in our higher education institutions.

“We cannot be complacent. This is not a case of ‘job done’.” 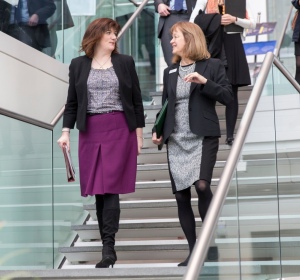 She concluded: “This report shows that we are moving in the right direction, but that we have to be committed to change if we want to get to a place where gender is irrelevant in leadership.

“This change cannot be left to chance. We need a concerted effort if we are to make progress.”

Professor Alice Gast, President of Imperial College London, said: “Since arriving in the UK in 2014, I have been very impressed by the many brilliant women I have met in all sectors, particularly higher education.  I have been especially inspired by Imperial’s women.

“They are advancing research in ways that make a tremendous impact on the world.  They epitomize what we do at Imperial, achieve academic excellence and have societal impact.

“The WomenCount report recognises that a broad range of actions are needed to bring about change, both in leadership roles and in supporting the next generation, and, it provides examples of good practice across institutions. It is only through our combined efforts that we will make significant and sustainable progress.”

The event for the launch of the report at Imperial was spearheaded by Karen Makuch – Lecturer and Academic Ambassador for Women for Faculty of Natural Sciences. It brought together leaders from Higher Education Institutions and their umbrella bodies as well as key figures from the public and private sectors.

It concluded with a panel discussion between Imperial’s Provost Professor James Stirling, Professor Geoff Dawson - Chair of the Committee of University Chairs and Chair of the Board of Governors at Sheffield Hallam University, and Dame Nicola Brewer - Vice-Provost (International) at UCL.

Speaking during the discussion, Professor James Stirling said: “Imperial is unique in the sector, as the only institution in the UK to focus exclusively on science, medicine, engineering and business. This brings its own challenges. Women are chronically underrepresented in STEM across all sectors, and we know there is a leaky pipeline of women entering universities to study these subjects.

“Athena Swan provides a fantastic framework to help address gender inequality. It reminds us that we cannot stand still, and continues to challenge us to keep improving and striving to do better. We are proud of our institutional silver award.”

The event comes a week before Women@Imperial Week, a celebration of the contributions women have made to life at the College running from Monday 7 to Friday 11 March.

Founded by Norma Jarboe OBE, it encourages institutions to set aspirational targets for women’s participation, measure outcomes, and report on progress with the aim of achieving gender balanced leadership.

WomenCount: Leaders in Higher Education 2016 was sponsored by Perret Laver.