Marine turtles experienced an evolutionary windfall thanks to a mass extinction of crocodyliforms around 145 million years ago, say researchers.

Crocodyliforms comprise modern crocodiles and alligators and their ancient ancestors, which were major predators that thrived on Earth millions of years ago. They evolved into a variety of species including smaller ones that lived on land through to mega-sized sea-swimming species that were up to 12 metres long. However, around 145 million years ago crocodyliforms, along with many other species, experienced a severe decline - an extinction event during a period between two epochs known as the Jurassic/Cretaceous boundary. 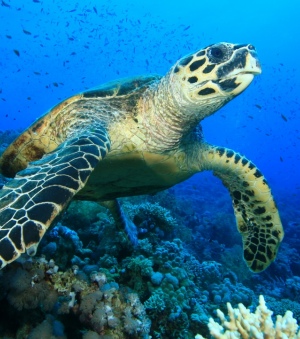 Now a PhD student and his colleagues from Imperial College London and University College London have carried out an extensive analysis of 200 species of crocodyliforms from a fossil database. One of the findings of the study is that the timing of the extinction coincided with the origin of modern marine turtles. The team suggest that the ecological pressure may have been lifted from early marine turtle ancestors due to the extinction of many marine crocodyliforms, which were one of their primary predators.

Jon Tennant, lead author of the study from the Department of Earth Science and Engineering at Imperial, said: “This major extinction of crocodyliforms was literally a case of out with the old and in with the new for many species. Marine turtles, the gentle, graceful creatures of the sea, may have been one of the major winners from this changing of the old guard. They began to thrive in oceans around the world when their ferocious arch-predators went into terminal decline.”

In the study, published today in the journal  Proceedings of the Royal Society B, the researchers point to evidence in the records of a dramatic extinction of crocodyliforms during the Jurassic/Cretaceous boundary. Up to 80 per cent of species on land and in marine environments were wiped out. This decline was primarily due to a drop in sea levels, which led to a closing off of shallow marine environments such as lagoons and coastal swamps. These were the homes and primary hunting grounds for many crocodyliforms.

The decimation of many marine crocodyliforms may also have laid the way for their ecological replacement by other large predatory groups such as modern shark species and new types of plesiosaurs. Plesiosaurs were long-necked, fat-bodied and small-headed ocean-going creatures with fins, which later went extinct around 66 million years ago.

Other factors that contributed to the decline of marine crocodyliforms included a change in the chemistry of ocean water with increased sulphur toxicity and a depletion of oxygen.

While primitive crocodyliform species on land also suffered major declines, the remaining species diversified into new groups such as the now extinct notosuchians, which were much smaller in size at around 1.5 metres in length. Eusuchians also came to prominence after the extinction, which led to today’s crocodiles.

The next steps will see the analysis extended to other groups including dinosaurs, amphibians and mammals to learn more about the effects of the Jurassic/Cretaceous boundary on their biodiversity.