Jupiter's X-ray aurora is sparked by the solar wind The solar wind around Jupiter is causing the intense X-ray bursts over the planet's polar regions, according to new research.

Auroras are caused by charged particles hitting a planet’s atmosphere at high speed. On Earth, we see this as the Northern and Southern Lights over the polar regions.

Other planets in the solar system, like Jupiter, also have auroras over their polar regions, but these are not just seen in the visible part of the spectrum. There are also auroras in the UV and X-ray portions of the spectrum, invisible to the naked eye, but extremely vivid when looked at with the right instruments.

By understanding how different planets are protected from the solar wind, or not, we can really start to say something about the possibilities for life on planets beyond our solar system.

What causes each of these auroras is different, and until now scientists were not sure what created Jupiter’s X-ray aurora. They knew that it was largely the result of oxygen, carbon and sulphur ions being accelerated to near the speed of light before they hit Jupiter’s atmosphere, but not what caused them to speed up.

Now, by using the data from three different satellites that remotely observed Jupiter at the same time, a team led by the Japan Aerospace Exploration Agency (JAXA) and including a researcher from Imperial have discovered that the acceleration necessary for the X-ray aurora is triggered by the solar wind. The results are published today in the Journal of Geophysical Research.

The solar wind is a stream of charged particles coming from the Sun. It varies over time, and is most intense when then Sun releases coronal mass ejections – huge bursts of magnetised particles often associated with solar flares and magnetic storms. 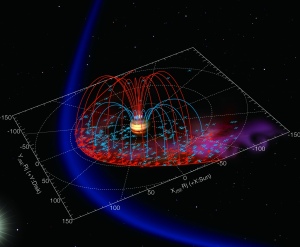 By comparing the intensity of Jupiter’s X-ray aurora and the variation in the solar wind, the team were able to conclude that the solar wind triggers this aurora. Detailed analysis of the X-ray emissions also show that they peak in regions close to Jupiter’s magnetic poles, and so likely come from the outer edges of the planet’s protective magnetic bubble (magnetosphere), where direct interaction with the solar wind takes place.

Jupiter has the strongest auroral displays in the solar system, and researchers hope that by understanding more about what causes them, they can determine how effectively planets like Jupiter are protected from the force of the solar wind. This has wide-ranging implications for the study of exoplanets, where the degree of this natural magnetic protection has a big impact on habitability.

Dr Adam Masters from the Department of Physics at Imperial, who helped the team interpret the connection between the solar wind and Jupiter’s magnetosphere, said: “This study is a great example of multiple satellites being used to tackle one of the biggest questions in planetary science. By understanding how different planets are protected from the solar wind, or not, we can really start to say something about the possibilities for life on planets beyond our solar system.

“We have only to look at Mars to see the importance of planetary protection from the surrounding space environment, where the decline of Mars’ global magnetic field is likely why so much of its atmosphere has been lost.”

Earth’s visible aurora is also triggered by the solar wind, but not all auroras are. Jupiter’s visible vibrant blue aurora is triggered by eruptions of charged ions from the moon Io, which is pulled and squashed by the gravity of Jupiter and its other big moons. Jupiter also has an aurora in the ultraviolet part of the spectrum, and this is caused by the rapid spin of the planet itself.

To determine which of these factors was at play in forming Jupiter’s X-ray aurora, three satellites looked at Jupiter for two weeks in April 2014. JAXA’s HISAKI satellite measured the intensity Jupiter’s UV aurora, while NASA’s Chandra X-ray observatory monitored the strength of the X-ray aurora. Finally, ESA’s XMM-Newton satellite looked at the chemistry of the ions in the aurora, determining that they are largely form the solar wind itself, rather than being flung out by Io.

'Jupiter’s X-ray and EUV auroras monitored by Chandra, XMM-Newton, and Hisaki satellite' by Kimura et al is published in Journal of Geophysical Research.