Team Technika and their Mentors

The competition, run by the Faculty of Natural Sciences and now in its second year, aims to motivate school students to engage with science and innovation, to encourage them to work together as part of a team and to engage them in a fun activity that is motivated by their curiosity and drive.

This year’s teams were creative, innovative, and full of enthusiasm – it was fantastic to see such passion for science.

The winners, Newton’s 4th Law, were a team from Haydon School in Pinner formed of Shivam Chauhan, Daniel Jenkins, Emilia Lawer and Lauren Wallis. They took home the top prize for their film and presentation on their idea for a new water purifier and electricity generator which utilises silver nanoparticles. 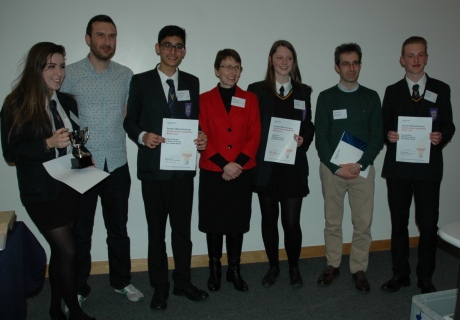 Newton's 4th Law with the judges

Dr Simon Foster said: ‘I was amazed at the standard of the teams that entered this year’s schools science competition. Not only were the scientific solutions proposed by the teams, innovative, imaginative and utilised ground breaking research, they were incredibly well explained and presented.

It was incredibly difficult to pick a winner from such a strong group of competitors, and I’m sure all of those taking part have a wonderful future ahead of them in STEM." 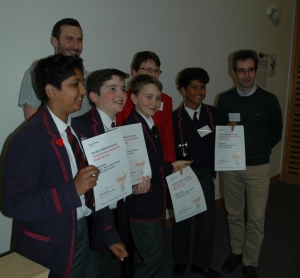 Team SAS with the judges

As their prize, the team will visit the Diamond Light Source, the UK’s national synchrotron – a world leading science facility which accelerates electrons up to very high speeds to produce bright beams of light that can then be used to study a vast range of subjects. The team also took home a trophy and individual prizes for each team member.

Nathan Francis, Mentor to the winning team said: "The Schools Science Competition was an absolutely fantastic event from start to finish. It really challenged the students to come up with a new idea to benefit society which developed there interest and research skills in the wider scientific area. The challenging topic really pushed the students to work together and fostered a strong team spirit where they wanted to improve their idea for the good of the team."

The judges also awarded prizes in each age category to the following teams:

Team SAS- Serious About Science, formed of Bilaal Auleer, James French, Ethan Swords and Ziggy Wamae from St Aubyn’s School, were winners in the Year 7-9 category with their idea for a case that uses an endothermic reaction to cool overheated personal devices quickly.

The Scientistas, Mayurey Kalaravy, Livia Khullar, Lucy Mellers and Jane Murphy from James Allen’s Girls’ School, won the Year 12-13 category, for their idea for a tab that would be used to test for dangerous levels of bacteria toxins in food.