An experiment using a Venus spacecraft, proposed after it launched, has found lower temperatures than expected in the planet's polar atmosphere.

The Venus Express (VEx) mission was launched in November 2005 by the European Space Agency with the goal of exploring Venus’ atmosphere. At the planned end of the mission, as it ran out of fuel in 2014, it descended into the atmosphere.

The VEx spacecraft was not initially designed to make these kinds of measurements.

Several months after the launch, Dr Ingo Mueller-Wodarg from Imperial’s Department of Physics and European colleagues realised that the spacecraft as a whole could also be used for measuring the upper atmosphere, and suggested an additional experiment for the craft, in the final stages of the mission.

Instruments on VEx measured the drag that the spacecraft experienced due to the density of the upper atmosphere, called aerobraking. The craft took measurements around 130-140 km altitude as it orbited the planet around the polar regions. 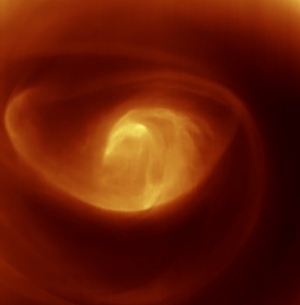 This is thought to be the result of the polar vortex, a huge storm system around the poles at 90 km altitude. The team’s results are published today in Nature Physics.

“The VEx spacecraft was not initially designed to make these kinds of measurements,” said Dr Mueller-Wodarg. “However it had on board a set of accelerometers, which are usually used for engineering purposes only but that we were able to use for science.”

The team say the same concept experiment could be applied to ESA’s ExoMars mission, which blasted off last month. They have put in a proposal to recreate the accelerometer experiment during the one-year aerobraking phase of ExoMars’ orbiter mission, due to begin in December 2016.

The team also found evidence of atmospheric waves in Venus’ atmosphere. Just like waves in water, atmospheric waves can be caused by winds flowing over obstacles such as mountains. On Earth, these affect the weather and cause the turbulence we feel in aeroplanes.

However, planets with atmospheres including Earth also experience much larger waves known as planetary waves, which are controlled globally by the spin of the planet. On Earth, planetary waves affect the positions of the jet streams and weather systems. The waves are created in the lower atmosphere and rise upwards.

The team uncovered a five-day pattern to these waves in the upper atmosphere of Venus. All planets where these waves have been recorded have different patterns to them related to the speed of the planet’s spin.

The upper atmospheric layer the team investigated is known as the thermosphere, and is close to the planet’s atmospheric boundary with space.

Dr Mueller-Wodarg said: “Knowing the characteristics of the atmospheres of other planets at these altitudes helps us understand how they interact with the space environment, including how they cope with space weather events, such as solar flares, coming from the Sun.

“Studying planetary atmospheres also helps us with spacecraft design by revealing what engineering challenges the crafts will face while descending through the atmospheres of other planets.”