Engineers have developed a computer program that mimics how doctors assess patient scans to determine signs of traumatic brain injury.

Traumatic brain injury (TBI) is an injury to the brain caused by trauma to the head. In the European Union alone, brain injury accounts for one million hospital admissions per year. 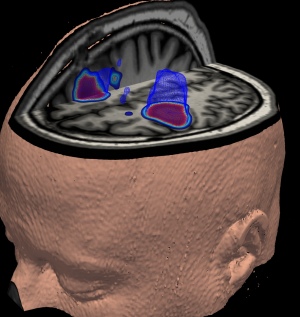 The researchers from Imperial College London have developed a computer program that mimics how a clinician analyses scans to identify lesions, which may indicate TBI. The team primarily see their computer program called Deep Medic as a tool to help clinical researchers to understand more about TBI.

This year, the team will use Deep Medic in a large-scale European study called CENTER TBI. Data from 5,000 patients will be collected from 30 hospitals across Europe and Deep Medic will be used to identify TBI in scans. This study has the potential to reveal new insights into traumatic brain injuries. It could also lead to the development more effective and efficient therapies for patients at lower costs.

Currently, the gold standard for detecting brain lesions is a manual process performed by a doctor who visually examines and marks out lesions on the scans taken by a Magnetic Resonance Imaging device. Depending on the particular abnormality, this process can take hours. This expertise is costly and not always an option for teams who need to assess hundreds of MRI scans as part of their research.

Deep Medic is an artificial neural network, a predictive algorithm that the team trained to look for abnormalities in brain tissue. It builds up a 3D image of a brain to pinpoint where lesions are located.

Deep Medic can do the assessment in a matter of minutes, instead of hours, which would improve research productivity and reduce costs.

The team have primarily used Deep Medic to analyse MRI scans associated with TBI. However, as TBI lesions are similar to lesions caused by other brain injuries, the team say their technology has wider applications. For example, they have also trialled the system to detect brain tumours in patients with cancer and lesions caused by strokes.

Dr Ben Glocker, from Imperial’s Department of Computing, said: “We can never replace the expertise of a physician. However, in research situations we may not always be able to monopolise their time and that is where Deep Medic can be of real benefit to teams. What is exciting about Deep Medic is that it can analyse a scan in a matter of minutes, which has the potential to improve research outcomes, and which may ultimately have benefits for patients with brain injuries.”

For the last two years, the researchers have been working with their clinical partners from Addenbrooke’s Hospital, Cambridge, carrying out small-scale studies to determine the usefulness, speed and accuracy of Deep Medic. They also entered Deep Medic in the Ischemic Stroke Lesion Segmentation Challenge in 2015 to determine if their system could detect lesions caused by strokes, which they won. The team are also trialling the technology using publicly available data on brain tumours.

Just recently, Dr Glocker and Konstantinos Kamnitsas, a PhD student who has been carrying out the underpinning research, won an Engineering and Physical Sciences Research grant.  It will enable them to expand the team, publish more research and build on their clinical collaborations. They are also making the current version of their technology available online as open source software, which they hope may push the development forward further.

Deep Medic was also recently recognised by the computer company NVIDIA. The project got an honourable mention as one of five finalists for the NVIDIA 2016 Global Impact Award. This recognises researchers who use NVIDIA technology for ground breaking work that addresses social, humanitarian and environmental problems.