A group of staff with cumulative service of over 1,700 years were recognised at a celebratory event earlier this week.

67 members of staff who had completed 20, 25 or 30 years at Imperial were invited to a drinks reception at 170 Queen’s Gate. The event was an opportunity for the President and senior staff to recognise and celebrate their service to the College.

Imperial’s continuing excellence is because of people like you

Congratulating the gathered staff on their achievements, Imperial’s President Professor Alice Gast said: “This celebration is just a small token of our appreciation, but it is heartfelt and we say thank you.

“Between you in this room is 1,700 years of Imperial knowledge and experience.   Your contribution can be seen across the globe through the successes of colleagues you have supported and students you have mentored,; alongside contributions to some of the great new technologies and innovations of our time. Imperial’s continuing excellence is because of people like you.” 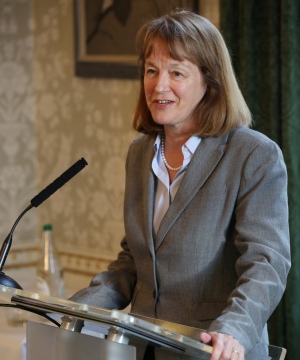 Imperial has changed considerably over the last three decades.   The number of staff at the College has increased five-fold, the Management School, which would become the Business School, would not be established until 1987 and the mergers with the medical schools had yet to begin. Professor Gast commented on how long-serving staff often express their wonder at how quickly time has passed:

“This sense of amazement at the passage of time happens to people who are good at what they do, who are dedicated to their work, who enjoy their jobs.”

The event provided an opportunity for staff to reminisce about their time at Imperial and how their careers at the College have progressed.

Dr Kristel Fobelets, Reader in Microelectronics Engineering and Director of Undergraduate Studies in the Department of Electrical and Electronic Engineering, spoke about the experience of working with students during her 20 years at Imperial:  “Every cohort is different and as a member of staff you change over time as well.  When I started at the College some students would ask if I was a student, but they don’t ask me that any longer!”

Others commented on how some things had stayed the same.  Geoff Owen, Mechanical Engineer in the Estates Division marking 20 years’ service, recalled: “One of my first projects was the installation of an experimental MRI machine for Professor Colin Caro.  It’s amazing to still see Professor Caro around campus and I always say hello whenever I see him”.   Professor Caro remains active in research and teaching after 50 years at the College. 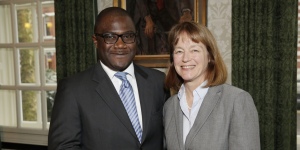 Paul Brown with Professor Alice Gast at the reception

Paul Brown, Mechanical Instrumentation Workshop Manager in the Department of Physics, attended the event to mark a quarter of a century’s service to the College.  His career at Imperial started in the Physics Departmental Mechanical Workshop, followed by 12 years working in the Optics Section workshops.   Reflecting on his time in the Optics workshops, Paul said:

“My years in the Optics workshop were fun ones. I was about the same age as some of the PhD students and made some good friends, and it has been fantastic to see many of them go on to become lecturers at Imperial.  I used to sing in the workshop in those days.  Well, I called it singing, some described it as cacophony!

“Some of the highlights of my time at Imperial are the refurbishment of one of our workshops, the revival of the Technician Apprenticeship Scheme in 2011 and eight years as an elected non-academic member of the College Court.  I’ve also made two visits to Buckingham Palace: the first a  Royal Garden Party at the invitation of the Department and the second a National Apprenticeship Service event hosted by the Duke of York  as part of the process of re-establishing our apprenticeship scheme.”