Researchers from Imperial College London have developed a new method of making membranes that results in enhanced permeance through molecular design.

Researchers from Imperial College London have developed a new synthetic method for producing molecularly designed polymer membranes that has the potential to make chemical separation processes up to two orders of magnitude more efficient than using conventional membranes.

Chemical separation processes in industry are typically quite costly, and current techniques often use thermal separation processes such as distillation and evaporation which now account for 10 to 15 percent of the world’s annual energy use. The use of synthetic polymer membranes for the separation of gases and chemicals provides a more efficient, non-thermal solution which has the potential to reduce energy consumption significantly, as well as reducing pollution and cutting carbon dioxide emissions.

Conventional membranes exhibit relatively low permeance of gas and liquids, which limits their applications in large scale separation processes. In particular, it is challenging to develop membranes that are resistant to the organic solvents used in petrochemical refining and chemical separation processes. Ongoing research efforts are being devoted to developing more cost effective, better performing membranes for gas and liquid separations, aiming to achieve high permeance, high molecular selectivity, and high stability in practical applications.

Now researchers from Imperial College London have developed a new synthetic approach for generating high-performance microporous polymer membranes that have potential applications in a wide range of separation processes. Details are published today in Nature Materials.

The team, led by Professor Andrew Livingston from the Department of Chemical Engineering at Imperial College London, are developing new technologies for membrane separations, which have a wide-range of applications in industry for instance in the purification of oil and natural gas, desalination, solvent nanofiltration and CO2 capture.

The researchers developed a novel approach for producing polymer membranes by linking twisted monomers to form crosslinked network polymers. These contorted monomers were used to synthesise a new class of microporous polymers, known as ‘polymers of intrinsic microporosity (PIMs)’, which have an increased volume of internal cavities. These cavities allow the membrane to be very permeable, while the network polymer acts as a scaffold that ensures it remains rigid and stable. 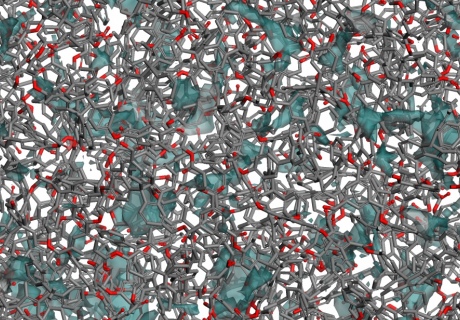 Professor Andrew Livingston said “This work reports new methods of fabricating polymer membranes using a molecular design approach. We are able to design the free volume, which acts as pores in the membrane, by choosing the monomers used to make the membrane separating layer. So we have managed for the first time to create interconnected 3D polymer network membranes in which we can control the size of pores and their connectivity. This means we can make a more accurate separation between molecules and at a higher processing rate, making more efficient separations with less consumption of energy.”

"We demonstrated a simple approach to preparing microporous thin polymer membranes using the aromatic polyester chemistry as an example" said Dr Maria F. Jimenez-Solomon, co-lead author of the study and a postdoctoral research associate from Livingston's group at Imperial College London. “However, the approach is not limited to synthesising polyesters, it has opened up new ways of synthesising membrane materials using a range of contorted molecules”.

“To optimize and scale up the synthetic approach, we performed extensive characterisations to understand the structure and properties of these polymer membranes, however there are still many interesting scientific questions to study in the future” said Dr Qilei Song, the paper’s co-lead author, a Junior Research Fellow in Department of Chemical Engineering at Imperial College London. “We expect that by tuning the molecular structure of the polymers in combination with nanoscale control of the membrane, the performance of polymer membranes can be enhanced even further”.

The porous structures of polymer membranes were also confirmed by molecular simulations, performed by Dr Kim E. Jelfs, a Royal Society University Research Fellow at the Department of Chemistry at Imperial College London, and a co-author of the paper. She said, “The computational approaches allow us to elucidate the nature of the materials, for example, we can predict the polymer structure and porosity based on the large scale computational screening of precursor libraries.” 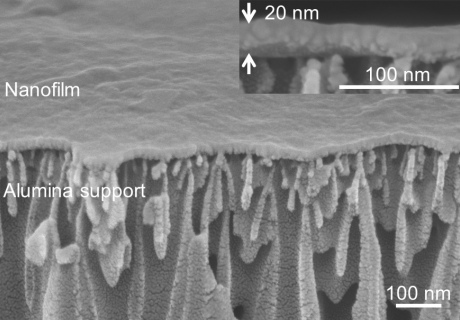 In the paper the researchers demonstrated the applications of their membranes in gas and organic solvent separations. They now plan to extend this approach to a wide range of porous polymers designed for various industrial applications, from water purification and desalination, and purification of pharmaceuticals, to hydrocarbon separation for use in the petrochemical industry.

“If we are able to use membranes to accurately separate molecules which are in organic solvents, we can work towards replacing distillation and evaporation processes with more energy-efficient membrane separation technologies”, added Professor Andrew Livingston. Why paper-thin filters could be key to cutting emissions