The winners of the Faculty of Natural Sciences Schools Science Competition showed off their work at this year's Imperial Festival.

The winners and runners-up of this year’s competition were given the opportunity to showcase their innovative ideas within the new Futures Zone at this year’s event.

Their exhibition stand included a bubble machine and a hand operated generator, and they offered a prize of sweets to anyone who could generate over 5 watts of electricity- which proved very popular with younger festival-goers!

Runners-Up, Team SAS (Serious About Science), formed of Bilaal Auleer, James French, Ethan Swords and Ziggy Wamae all 12 years old and from St Aubyn’s School, spoke to visitors about their idea for a case that uses an endothermic reaction to cool overheated personal devices quickly. They demonstrated the science behind their idea with an experiment using water and ammonium nitrate and also showcased the film which won them a runners-up prize in the schools competition in March this year.

The teams’ attendance at the event was a great success, so much so that it is planned to invite all finalist teams from the upcoming 2016/7 Schools Competition to showcase their ideas at the festival in 2017.

“Being part of the Imperial Festival was an absolute pleasure. It was really positive for the students to not only visit, but actually take part in such an 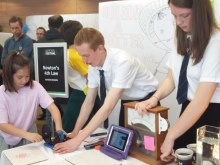 exciting event. The students met and discussed science with a range of academics, alumni, students and visitors. It was fantastic for them to see where their interest in science could possibly take them in the future, but it also gave them the chance to see the genuine passion people have for science and technology. I would recommend attending the Festival in any capacity, whether it be as a spectator or participant, as it showcased a huge range of cutting edge projects and had a thoroughly engaging tone throughout.”

The Haydon School team members will all now go on to complete work experience placements within the Faculty over the summer.

Were you able to join us for Imperial Festival on Saturday 7 and Sunday 8 May?

Let us know your thoughts by 20 May and be in with the chance of winning £50 of vouchers for an online shop of your choice! Click here to leave your feedback