Marie Curie fellow Dr Dimitra Georgiadou has carried out academic and industrial projects in Greece, Germany, Italy and the UK.

Firstly Dimitra, what are next generation electronics?

Well that’s a very broad term, and I suppose it is just a way of describing smaller, faster, thinner, more flexible and sustainable electronic devices, which are characterised either by increased performance or added functionalities to the already existing electronics. Often this term also refers to the use of advanced materials and processes compared, for example, with the standard silicon semi-conductor technologies that have been dominant platform for computing devices over the past several decades. Of course these have been hugely successful, but they have now reached their limits in terms of miniaturisation, energy efficiency, flexibility and performance.

It’s far better to have borders open, especially when it comes to research; I can’t really imagine doing research within borders of any kind.

Next generation electronics – often based on polymers,  well-known plastics and other carbon-based materials – can be easily manufactured at a high throughput and over large areas using simple printers and electronic inks for example. This opens up a huge number of potential applications by allowing electronics to be integrated seamlessly with many other products giving them smart functionality. That could be windows or walls that harvest light energy or smart clothes that monitor fitness. It also forms the underpinning technology for what is being referred to as the ‘Internet of Things’ that could allow fully automated ‘smart homes’ that interact with their inhabitants like living organisms, for instance by dimming the lights according to mood and reordering groceries that are running low or are about to expire in the fridge.

But when are we actually likely to see these technologies come through to market? 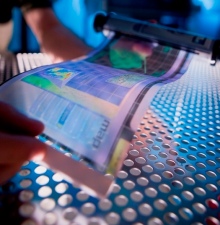 We’re already seeing them. Organic light emitting diodes (OLED) are one early example. Many manufacturers now use OLED displays in mobile phones and TV screens – as they offer better image and colour quality (with deeper blacks and brighter whites), reduced power consumption and curved or even translucent designs compared with conventional LCDs. In fact, my PhD project at the National Center for Scientific Research “Demokritos” in Athens was focused on optimising the performance of OLEDs for white light and display applications – essentially using photochemistry to form all three basic colours (R-G-B) on a single polymer layer and thus simplify the manufacturing process of the individual pixels. It’s very rewarding to see the broader technology in which you have invested research time to finally come to the market!

How do you find it navigating between basic and applied research? 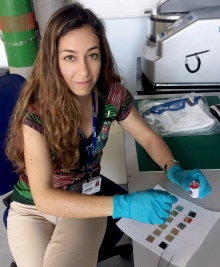 For me it’s always been a natural thing – although it does help having an engineering background as I do with my Bachelor’s in Chemical Engineering. I don’t particularly see myself as a great expert in any field but I have a broad knowledge base and if I see the potential in something or need to focus on a particular technology it’s easy because I have the vocabulary and I have the tools to go deeper. So I’ve worked on OLEDs for my PhD, on organic photovoltaics (solar cells) in my first postdoc and radio-frequency identification (RFIDs) devices for tracking and tagging objects in a subsequent project. Now I’m about to start looking at energy harvesting using nano-generators – so taking advantage of the flexibility of plastics so that when they bend they convert energy released from mechanical deformation into electrical power.

Some of these projects have been basic level research in terms of characterising and optimising materials and performance of electronic devices – while other projects have been more industrially focused by looking at how to scale up manufacturing processes for example. I have also undertaken a couple of purely industrial placements, at the multinational company Procter & Gamble in Italy, looking at a new vision system for quality control of the production line and at Schreiner Group in Munich examining electroluminescent foils for automobile applications. At that time, however, I figured out that such a career path wasn’t quite for me, but industrial applications continue to provide a great motivation for my academic research. 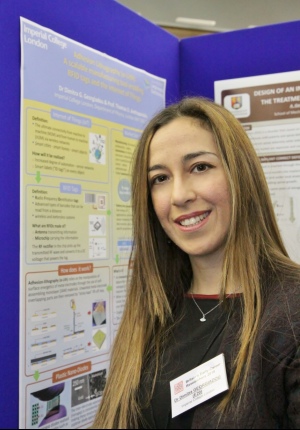 Dimitra at SET for Britain

You clearly have some interest in politics having recently presented your work and conversed with MPs at parliament as part of the SET for Britain event – do you have any thoughts on current issues surrounding the EU?

No one knows exactly how the EU will evolve in the future and you would hope that the UK would always seek to attract the very best scientists from Europe and overseas no matter the outcome. But the best way to do that seems to be through the EU. It’s far better to have borders open, especially when it comes to research; I can’t really imagine doing research within borders of any kind. It’s mutually beneficial - everybody wins. The UK wins by people coming and bringing their knowledge, talent, skills, thereby attracting attention and funding. And individuals themselves win too as well, with enhanced career opportunities.

I do worry about what will happen to all the European research projects if the UK leaves the EU.

Before I came to Imperial I had spoken with Professor Thomas Anthopoulos, now my supervisor, on a few occasions at European conferences. I was aware of the projects going on at Imperial and we discussed how my own skill-set might be best matched with some of that work to progress it. That process happened quite smoothly – and when I came to Imperial I secured extension of my funding, firstly from the Engineering and Physical Science Research Council (EPSRC), then I won a Marie Sklodowska-Curie individual fellowship from the European Commission. Of course, I do worry about what will happen to all the European research projects if the UK leaves the EU.