Sir Tom Kibble, Emeritus Professor of Physics at Imperial, has died at the age of 83.

Sir Tom was one of the most revered members of Imperial’s academic community and made profound contributions to the field of theoretical physics in a long and illustrious career.

Thomas Walter Bannerman (Tom) Kibble was born in 1932 in Madras, India. He attended school in Edinburgh and graduated from the University of Edinburgh (MA 1955, BSc 1956, PhD 1958), and joined the Department of Physics at Imperial as a Nato Fellow in 1959. In 1970 Sir Tom became Professor of Theoretical Physics at Imperial, and held the position of Head of the Department of Physics from 1983 to 1991. 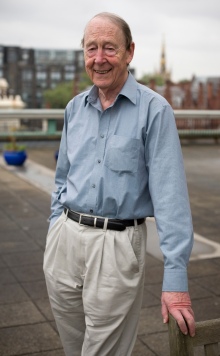 Sir Tom's seminal work came in 1964, whilst working at Imperial, with the paper he wrote on 'Global conservation laws and massless particles' in collaboration with two American scientists - Gerald Guralnik and Richard Hagen from the University of Rochester, New York. This work, along with a 1967 paper written by Sir Tom alone, led to the concept of a mass-giving particle now known as the Higgs boson, and proved a key feature of the standard model of particle physics.

It was for this body work that Sir Tom was jointly awarded the 2010 J.J. Sakurai Prize for Theoretical Particle Physics – one of the most prestigious international prizes in physics – along with the five other leading scientists credited with the Higgs theory. Two of these scientists, Sir Peter Higgs and François Englert, were subsequently awarded the Nobel Prize for Physics for this work in 2013.

Known for his modesty and shunning the limelight, Sir Tom was nevertheless knighted in the 2014 Queen’s Birthday Honours for services to physics.

Professor Jerome Gauntlett, Head of Theoretical Physics at Imperial and close colleague and friend of Sir Tom's, led the tributes. 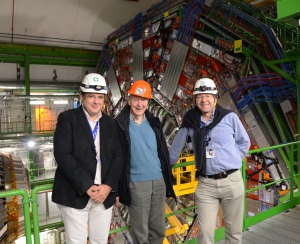 "Professor Sir Tom Kibble was distinguished for his ground-breaking research in theoretical physics and his work has contributed to our deepest understanding of the fundamental forces of nature. He is best known for his seminal work in the 1960s that led to the concept of a new elementary particle now known as the Higgs boson, a key feature of the Standard Model of particle physics. The existence of this particle was confirmed experimentally by the Large Hadron Collider at CERN in 2012.

"Professor Kibble was also a major pioneer in applying ideas of high energy physics to study the early universe. For his fundamental contributions, he was awarded numerous prizes and awards throughout his illustrious career, during which he conducted himself with extraordinary modesty and integrity. He was held in the highest esteem and with great affection by his colleagues and students alike. He will be very sadly missed and we extend our deepest condolences to the Kibble family."

Tom was not only a brilliant scientist, but a true gentleman

Imperial’s President, Professor Alice Gast, said: “We join our colleagues at Imperial and around the world in mourning Sir Tom’s passing. He was a pioneer and leaves a lasting legacy in physics and at Imperial. He has touched the lives of so many at Imperial and his students, colleagues and friends will miss him deeply."

Imperial’s Provost Professor James Stirling, a theoretical physicist himself, added: "At Imperial we are all shocked and saddened by the news of Tom's death. Tom's contribution to the theory of the Higgs mechanism was essential in the development of the standard model, and will be an enduring legacy to his work. Tom was not only a brilliant scientist, but a true gentleman. In every sense he was a tremendous role model for young scientists. It was a privilege to have known him and, latterly, to have been his colleague here at Imperial."

A full obituary for Sir Tom will follow. In the meantime former friends, colleagues and students of his are invited to share their own tributes and memories through the comments section below.