A temporary plaque has been erected at the College in honour of Professor Walter Hayman, who came to the UK from Germany in 1938, aged 12.

The I am a Refugee campaign has been developed by the Joint Council for the Welfare of Immigrants (JCWI) to recognise and celebrate the contribution of refugees to British society. Marking Refugee Week (20-26 June), the campaign will see nine plaques, along the lines of the English Heritage blue plaques, placed on buildings where refugees have lived, worked or studied.

We arrived with nothing, and yet since then we have given this country a dozen Nobel prizes. You just have to give people a chance.

Professor Hayman, now a Senior Research Investigator in the College's Department of Mathematics, was born in Cologne in 1926 to parents of Jewish ancestry. In 1938, he was sent to the UK alone aged 12, and managed to persuade his host to invite his parents over, saving them from deportation to a concentration camp.

Professor Hayman won a scholarship to the University of Cambridge, going on to hold academic roles there and at the University of Exeter. He joined Imperial in 1956 as Professor of Pure Mathematics, and the same year was appointed a Fellow of the Royal Society. The author of over 200 scientific papers, Professor Hayman’s research has spanned almost all areas of complex analysis, including fundamental work on the theory of functions. 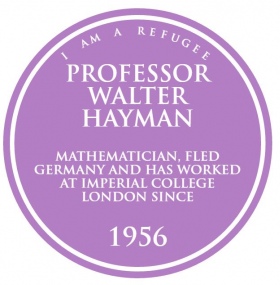 Professor Hayman has sat on the board of the Council for At-Risk Academics (CARA), and is a supporter of Bail for Immigration Detainees. Professor Hayman said: “We arrived with nothing, and yet since then we have given this country a dozen Nobel prizes. You just have to give people a chance.”

The plaque in Professor Hayman's honour has been erected for Refugee Week in the reception of the Huxley Building on the South Kensington Campus [pdf], where the Department of Mathematics is based. "The boy's glasses fell off when he was shot at, and now he couldn't see"