Imperial's Director of Music and the Blyth Centre, Richard Dickins, has nurtured and built up Imperial's now thriving musical and artistic community.

These days it is far more accepted that creativity manifests not just in the traditional arts but also in the sciences: research and innovation at its very heart requires original thinking and bold new ideas.

Yet even by the strictest definitions of creativity, Imperial still holds its own − notably with a thriving and enormously talented musical community. Richard Dickins, Imperial’s Director of Music and the Blyth Centre, has been at the vanguard of this scene for more than thirty years.

While Richard is perhaps most associated with classical music, being a nationally acclaimed conductor, when I meet him he’s effusive about Imperial’s close harmony group the Techtonics, who recently won the international a cappella collegiate championship – beating the US at their own game in Broadway.

“I feel immensely proud of them because I’ve had no hands on experience with them: it’s entirely of their own making.

“Whether it’s appropriate or not for me to feel pride – I do anyway! Because it’s part of what we call the music family here. People feel they are part of a very close knit group, even though it's many hundreds of people strong now.”

Richard’s Imperial journey actually started at close neighbours, the Royal College of Music (RCM), where he was a postgraduate student in 1979. It was there he met David Bogle a talented violinist who was playing in one of the RCM’s student orchestra.

"Suddenly we were all squeaking with excitement because the Great Hall was filling up, and filling up"

Director of Music and the Blyth Centre

“I assumed he was at the RCM, but as we got talking I found out he was actually a Chemical Engineering undergraduate at Imperial. We hit it off and David asked me if I would be interested in conducting Imperial’s orchestra for a year to cover a sabbatical period for the incumbent.”

Richard of course agreed, and the rest is, as they say, history. Due to illness the conductor never returned so Richard stayed, initially as a volunteer then working as an Imperial staff member for one afternoon a week. He marked his official 30th anniversary as an Imperial employee in February 2016. (Incidentally, David and Richard also became best friends, serving as best men at each other’s weddings). 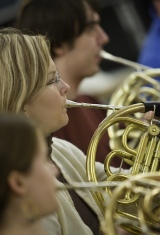 “I came over here with no particular expectations and I found the most lovely bunch of people who were itching to do more than they currently were. It was a small orchestra, but there were some good players who hadn’t been stretched.

“I will never forget doing our first big performance together in the Great Hall. Previously they had played to an audience of around 40 or 50, which doesn’t look that impressive in such a large space. Suddenly we were all squeaking with excitement because the Great Hall was filling up, and filling up, and for the first time ever in the orchestra’s history they had a capacity audience. I think it was because the people in the orchestra believed in themselves; they knew they were doing a good job and it was a piece within their grasp. From there we’ve never looked back.”

“The Blyth Centre really transformed the musical life of the College

Director of Music and the Blyth Centre

Perhaps the high point, orchestrally, came in 2008 when ICSO won a one-off national competition of university orchestras, beating orchestras from universities with major academic music departments including The Universities of Cambridge, Manchester and Southampton. Judge Julian Lloyd-Webber described the performance as “quite exceptional,” comparing it to that of a professional orchestra.

Arguably just as important as these achievements though is the way in which music has been aligned with academic life at Imperial.

One of the first initiatives in this respect came with the granting of RCM music scholarships for prospective Imperial undergraduates with grade 8 distinction in a principal instrument, allowing them to apply for free lessons at the RCM. That was steered by Richard with the backing of then College Rector Sir Eric Ash – who still supports music at Imperial.

Then came the joint degree programme, allowing exceptionally gifted prospective students the chance to study a four-year BSc in Physics and Music Performance in association with the RCM.

In 2000, Richard oversaw the opening of the Blyth music centre, which followed the bestowing of a philanthropic gift from alumnus Neville Blyth and his wife Kitty. The College granted permission to build a new facility, effectively on the roof of the library, with 11 dedicated practice rooms.

“That really transformed the musical life of the College. Before that there had been nowhere to even house a piano. Now people can practise singing, cello, piano etc, any time or day or night and there’s a whole range of chamber music that can happen, for example string quartets or three horns together. We also have music teachers who come and provide lessons in the rooms, at a much-reduced rate.”

Richard points out that it is not only students who enjoy the practice rooms, but staff from many areas of the College as well, who tend to book space early in the morning before work. He recalls a very senior former member of Imperial’s management team who used to come in to practice for an hour before Rectors briefings.

For the majority of us not blessed with musical playing gifts though, there is the free lunchtime concert series that Richard, with his large network of contacts, has turned into a real showcase of talent from some of world’s greatest professional musicians.

“It widens our audience base; there are a number of people who have left Imperial yet who love coming back to these because they have a huge fondness for the College, and if they happen to be musically interested then what better way to continue to engage than come to a free concert and meet with people.”

With the building of the Blyth Centre, also came the creation of the first dedicated space for art with the Blyth Gallery and the recruitment of a professional artist in Lee Mindy to curate a rolling programme of exhibitions by professional artists and student and staff with artistic talents. The latter often result from time spent experimenting with ideas and media in the studio space in Princes’ Gardens. 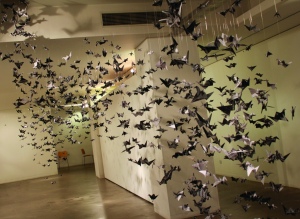 'Untethered' - Exhbition at the Blyth Gallery

While music has had a head start on art at the College − with a number of Imperial graduates over the years going on to study music at postgraduate level or pursue it as a career − slowly art is beginning to catch up.

“A recent graduate and member of LeoSoc enjoyed his artistic pursuits at Imperial so much he’s now gone onto to take a degree in art at one of the most prestigious art schools in London.”

That’s something Richard is keen to build on in his remaining time at Imperial however long that might be.

Given how far Richard has taken music, don’t bet against him.

Richard inspires the next generation at Imperial Festival