The Big Bang might have been just a Big Bounce A new study of the early universe reveals how it could have been formed from an older collapsing universe, rather than being brand new.

The universe is currently expanding and it is a common theory that this is the result of the ‘Big Bang’ – the universe bursting into existence from a point of infinitely dense and hot material.

Our model’s ability to give a possible solution to the problem of the Big Bang opens the way to new explanations for the formation of the universe.

However, physicists have long debated this idea as it means the universe began in a state of complete breakdown of physics as we know it. Instead, some have suggested that the universe has alternated between periods of expansion and contraction, and the current expansion is just one phase of this.

This so-called ‘Big Bounce’ idea has been around since 1922, but has been held back by an inability to explain how the universe transitions from a contracting to an expanding state, and vice versa, without leading to an infinite point.

Now, in a new study published today in Physical Review Letters, Dr Steffen Gielen from Imperial College London and Dr Neil Turok, Director of the Perimeter Institute for Theoretical Physics in Canada, have shown how the Big Bounce might be possible.

Cosmological observations suggest that during its very early life, the universe may have looked the same at all scales – meaning that the physical laws that that worked for the whole structure of the universe also worked at the scale of the very small, smaller than individual atoms. This phenomenon is known as conformal symmetry.

In today’s universe, this is not the case – particles smaller than atoms behave very differently to larger matter and the symmetry is broken. Subatomic particle behaviour is governed by what is called quantum mechanics, which produces different rules of physics for the very small.

For example, without quantum mechanics, atoms would not exist. The electrons, as they whizz around the nucleus, would lose energy and collapse into the centre, destroying the atom. However, quantum mechanics prevents this from happening. 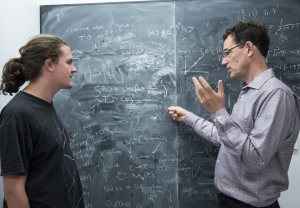 In the early universe, as everything was incredibly small, it may have been governed solely by the principles of quantum mechanics, rather than the large-scale physics we also see today.

In the new study, the researchers suggest that the effects of quantum mechanics could prevent the universe from collapsing and destroying itself at end of a period of contraction, known as the Big Crunch. Instead, the universe would transition from a contracting state to an expanding one without collapsing completely.

Dr Gielen said: “Quantum mechanics saves us when things break down. It saves electrons from falling in and destroying atoms, so maybe it could also save the early universe from such violent beginnings and endings as the Big Bang and Big Crunch.”

Using the idea that the universe had conformal symmetry at its beginning, and that this was governed by the rules of quantum mechanics, Dr Gielen and Dr Turok built a mathematical model of how the universe might evolve.

The model contains a few simple ingredients that are most likely to have formed the early universe, such as the fact that it was filled with radiation, with almost no normal matter. With these, the model predicts that the effect of quantum mechanics would allow the universe to spring from a previous universe that was contracting, rather than from a single point of broken physics.

Dr Turok said: “The big surprise in our work is that we could describe the earliest moments of the hot Big Bang quantum mechanically, under very reasonable and minimal assumptions about the matter present in the universe. Under these assumptions, the Big Bang was a ‘bounce’, in which contraction reversed to expansion.”

The researchers are now investigating how this simple model can be extended to explain the origin of perturbations to the simple structure of the universe, such as galaxies. “Our model’s ability to give a possible solution to the problem of the Big Bang opens the way to new explanations for the formation of the universe,” said Dr Gielen.