A large fraction of UK plastic waste that ends up in the ocean accumulates in the Arctic Ocean, where it can harm all kinds of wildlife.

This is according to a new analysis by experts in ocean currents from the Grantham Institute at Imperial College London, who are presenting their research at the Royal Society’s Summer Science Exhibition this week.

Plastic causes a continuous path of destruction from surface to seafloor. This analysis shows how in the UK we’re part of the problem.

There is already a considerable amount of plastic pollution found in Arctic waters and ice. Here, marine organisms mistakenly eat, are poisoned by, or become tangled in floating plastic, which damages their health and can kill them.

Now, Imperial researchers have provided evidence that waste from the UK is contributing to the problem.

Dr Erik van Sebille, who leads the team, has tracked the path of the UK’s plastic waste using ‘PlasticAdrift.org’, a tool the team designed to track ocean currents.

After being flushed into the sea from the coastlines of the UK, he found that much of the plastic that doesn’t wash back onto the beach or sink to the ocean floor drifts over two years towards the Barents Sea, north of Norway, before circulating in the Arctic.

The team, from the Department of Physics, Department of Chemical Engineering and the Grantham Institute, are at the Royal Society this week (5-10 July) presenting their research into what happens to plastic waste in the ocean, in an exhibit titled 'Plastic not fantastic in our oceans'. Visitors can quiz the scientists about how plastic end up in the oceans and the damage done once there. They can also engage in a discussion about workable solutions. 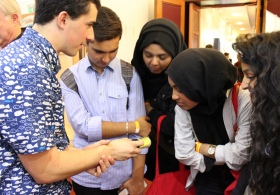 Dr van Sebille, from the Grantham Institute at Imperial, said: "We’re only just beginning to understand the effect that plastic waste has on the fragile Arctic ecosystem, but we know enough about the damage done by oceanic plastic pollution to act and reduce its impact on our oceans and coastlines.

"From seabirds caught in loops of plastic packaging to polystyrene particles blocking the digestive systems of fish, plastic causes a continuous path of destruction from surface to seafloor. This analysis shows how in the UK we’re part of the problem.

"It would be impossible to ban plastic, and undesirable as it is a useful material that offers many benefits. We should instead have a holistic approach to improving the situation, including social and behavioural, chemical and engineering solutions - aiming to minimise the amount of plastic that ends up in the oceans and make sure it degrades quickly and safely if it does."

Scale of the problem

Millions of tonnes of plastic are washed into the ocean each year – in 2010 an estimated 4.7 million to 12.7 million tonnes entered the oceans.

Of all the plastic that has ever entered the ocean it is estimated that just 1% is floating on the surface. The rest sits below the surface, on our beaches or in the stomachs of marine animals who live by our coastlines, where plastic harms the greatest number of living things.

The research team have produced a Grantham Briefing Paper summarising the ocean plastic pollution problem and the challenge in finding chemical, engineering and socio-economic solutions for  the UK.

Adapted from a press release by the Royal Society Grantham Institute researcher takes a stand on plastic microbeads Imperial researchers join the best of UK science on show at the Royal Society To clean up ocean plastics focus on coasts, not the Great Pacific garbage patch Health of seabirds threatened as 90 per cent swallow plastic

Summer Science Exhibition 2016: Plastic not fantastic in our oceans