Doctors from war affected countries have been trained in the latest limb salvaging techniques as part of a free course run by Imperial.

Every year landmines kill approximately 15,000 to 20,000 people around the world and maim countless more. Developing countries that have been affected by war lack the infrastructure, trained rehabilitation professionals, financial and technical resources to adequately treat people who have suffered blast injuries.

Researchers at the Royal British Legion Centre for Blast Injury Studies (CBIS) at Imperial College London, with financial support from the charity Find a Better Way, invited a cohort of 12 trauma surgeons who live in countries that are landmine affected regions. Delegates were trained in the latest amputation and knee salvaging techniques, drawing on surgical advancements made during and after the Afghanistan (2001 -2014) and Iraq (2003 – 2011) conflicts.

The course was led by CBIS researchers, who focus on the effects of blast injuries on the musculoskeletal system. Professor (Colonel) Jon Clasper, CBIS clinical lead, who has served in both the Iraq and Afghanistan conflicts, imparted developments in limb salvaging techniques. Mr Dafydd (Taff) Edwards, a trauma surgeon in the armed forces who is studying for a Doctorate at CBIS, shared his extensive experience of caring for injured soldiers on the front-line and in the UK.

Professor Bull, CBIS Director, who is also head of Imperial’s Department of Bioengineering, said: “The trauma sustained by patients with blast injuries are usually complex and often affect the skin, nervous system, muscle and bone. We now know so much more about how to rapidly treat patients including more extensive tissue salvage, and how to make the rehabilitation process more effective. This course is our way of transferring information to surgeons working in countries that are dealing with the legacy of conflict.”

Delegates came from as far afield as Sri Lanka, Indonesia and Algeria. Dr Vuthy Chhoeurn, from Cambodia, was one of the attendees. His country is one of the most contaminated regions in the world for landmine fields, mostly lying undetected in remote villages, rice fields and forests. Low income farmers and villagers are most at risk from buried landmines, which detonate under farm machinery, near villages and on roads. 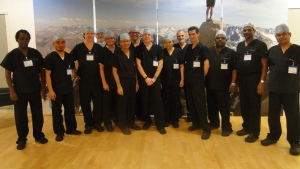 Dr Chhoeurn previously worked at a frontline hospital (1989-1997) during civil war in Cambodia, where mine injuries took approximately 30 per cent of his time. He now works at the National Children’s Hospital in Phnom Penh, the capital of Cambodia, where all complicated trauma cases are sent to him. He also runs a Cambodia-wide program to treat patients with blast injuries free of charge.

Dr Chhoeurn said: “During the civil war the main blast injuries sustained to military personnel were to the lower limbs, after they stepped on buried landmines. Since then it has been farmers and children who are most vulnerable. Many children mistakenly believe they are playing with shiny scrap metal, but it can explode at any time. In these cases injuries include blindness, hand amputations, facial damage and chest and abdominal injuries.  These are very complex injuries to treat.”

In 2015, landmines and other old ordnance in Cambodia killed or injured 111 people, according to figures from the state-run Cambodian Mine Action Authority. Of the 111 casualties, 18 people were killed by explosions and 23 had body parts amputated.

Dr Chhoeurn added: “This course has been a really unique opportunity for me and it will put me in a better position to provide the best care ever to casualties of landmines. I am also a lecturer and I plan to share this valuable knowledge with colleagues to help train a younger generation back in Cambodia.”

Examples of research areas Dr Chhoeurn and his colleagues were taught included the biophysics of blast injuries, new approaches to knee amputations, new reconstruction techniques, better methods for cleaning and treating wounds and improved methods for detecting trauma and its effects on patients.

The training by CBIS, transportation and accommodation and the facilities provided by the medical equipment manufacturing company Smith & Nephew were free of charge to attendees.