Nature's weirdest particles in the spotlight at Neutrino 2016 conference More than 700 scientists gathered in London to discuss particles whose strange behaviour could provide clues as to why the universe exists.

Earlier this month, Imperial College London and the Institute of Physics hosted the Neutrino 2016 conference. Scientists from across the world gathered to discuss the latest results and theories surrounding neutrinos – exotic particles with very little mass which change from one type to another as they fly through space.

The detection of neutrinos that originate from outside our solar system, in energetic events like supernova explosions, gives us a new way to look at the universe.

Sixty-five billion neutrinos pass through each square centimetre of the Earth every second, but the fact that they react only weakly with other matter has made their detection difficult. However, a number of large-scale experiments across the world have been discovering more about them in recent decades.

The detection of neutrinos from different sources won two scientists, Professor Arthur B. McDonald and Professor Takaaki Kajita the 2015 Nobel Prize in Physics. Both gave presentations about the history of the experiments they conducted.

The conference was opened by Imperial Provost Professor James Stirling. During the week physicist and TV presenter Professor Brian Cox gave a free public lecture on the importance of neutrinos, taking the audience through the history, current theory, their detection and what the future might hold.

Researchers at the conference presented the most recent results in neutrino science, giving indications that they could be getting close to answering some of the biggest questions in science.

One of these is whether the properties of neutrinos could provide the key to why the universe exists at all. Every type of particle that makes up the universe has an antimatter counterpart – an identical particle with the opposite charge. Physicists predict that during the Big Bang, the creation of the universe, equal amounts of matter and antimatter should have been created. 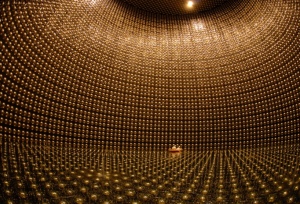 Most particles have been investigated for such differences but so far nothing can fully explain this phenomenon. Neutrino behaviour is one of the last areas to be investigated, and shows real promise.

Conference co-chair and Imperial physicist Professor Kenneth Long said: “T2K and NOvA, two large neutrino beam experiments, both presented results at the conference that hint that neutrinos and antineutrinos don’t behave in the same way. The two experiments also agree well on the scale of the difference – although we still need more results to get conclusive proof.”

Several groups at Imperial are involved in neutrino science, from developing the theory to conducting big experiments. These include T2K, where neutrinos are fired from a beam in eastern Japan to a detector 295km away in the mountains of the north-western part of the country. 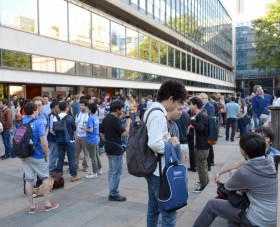 Imperial groups are also working on future neutrino experiments, such as Hyper-Kamiokande proposed for Japan and the Deep Underground Neutrino Experiment (DUNE) due to be constructed in the US, which will send neutrinos on a 1,300km journey through the Earth.

Experiments involving Imperial physicists are also looking at the fundamental nature of the neutrino. These experiments seek to detect a rare and exotic nuclear decay process that, if observed, would indicate that the neutrino and its antiparticle are actually the same particle.

As well as big questions about the universe, the practical side of neutrinos was also discussed at the conference. “The detection of neutrinos that originate from outside our solar system, in energetic events like supernova explosions, gives us a new way to look at the universe,” said Professor Long.

Neutrinos are thrown off by exploding stars, and their detection at various monitoring stations on Earth could direct astrophysicists where to look to observe the phenomenon. Imperial physicists are active here too, playing key roles in the IceCube experiment at the South Pole.

Small neutrino detectors were also described, which could have the power to monitor nuclear reactors and other nuclear events, as neutrinos are produced during nuclear reactions.

The conference was hosted by Imperial College London and the Institute of Physics, and was strongly supported by a host of national and international bodies. Neutrinos hint at why antimatter didn't blow up the universe - New Scientist What's the matter with the universe? - The Economist (Babbage)