Some meteorite impacts may destroy evidence of life, according to new study

Scientists suggest signs of life from under Mars' surface may not survive in rocks excavated by some meteorite impacts.

Our study is showing us is that we may need to be nuanced in our approach to the rocks we choose to analyse.

Scientists analysing samples from Mars’ surface have so far not conclusively detected organic compounds that are indigenous to Mars, which would be indicators of past or present life. The inconclusive results mean that researchers are now suggesting that a good place to find these organic compounds would be deep underground – from rocks that have been blasted to the surface by meteor impacts. This is because such rocks have been sheltered from the Sun’s harmful radiation and from chemical processes on the surface that would degrade organic remains.

Now, a team of scientists from Imperial College London and the University of Edinburgh has replicated meteorite blasts in the lab. The aim of the study was to see if organic compounds encased in rock could survive the extreme conditions associated with them being blasted to the surface of Mars by meteorites.  The study, published today in Scientific Reports, suggests that rocks excavated through meteorite impacts may incorrectly suggest a lifeless early Mars, even if indicators of life were originally present. 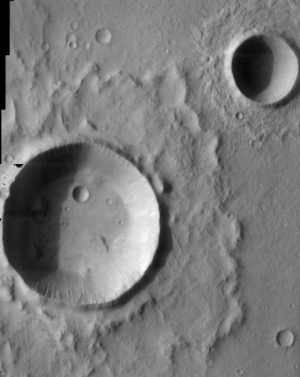 Meteorite impacts can eject huge quantities of rock from underground, making them an important target for searching for signs of life. (Image: NASA)

In the study the team replicated blast impacts of meteorites of around 10 metres in size. The researchers found that the types of organic compounds found in microbial and algal life - long chain hydrocarbon-dominated matter- were destroyed by the pressures of impact. However, the types of organic compounds found in plant matter – dominated by aromatic hydrocarbons - underwent some chemical changes, but remained relatively resistant to impact pressures. Meteorites often contain organic matter not created by life, which have some similarities in their organic chemistry to land plants. The team infer that they also should also be resistant to blast impacts.

Their study could help future missions to Mars determine the best locations and types of blast excavated rocks to examine to find signs of life. For example, it may be that meteorite impacts of a certain size may not destroy organic compounds or scientists may need to concentrate on rocks excavated from a certain depth.

Professor Mark Sephton, co-author of the research from the Department of Earth Science and Engineering at Imperial College London, said: “We’ve literally only scratched the surface of Mars in our search for life, but so far the results have been inconclusive. Rocks excavated through meteorite impacts provide scientists with another unique opportunity to explore for signs of life, without having to resort to complicated drilling missions. Our study is showing us is that we may need to be nuanced in our approach to the rocks we choose to analyse.”

Dr Wren Montgomery, co-author of the study from the Department of Earth Science and Engineering, added: “The study is helping us to see that when organic matter is observed on Mars, no matter where, it must be considered whether the sample could have been affected by the pressures associated with blast impacts. We still need to do more work to understand what factors may play an important role in protecting organic compounds from these blast impacts. However, we think some of the factors may include the depths at which the rock records are buried and the angles at which meteorites hit the Martian surface.”

Previous in situ analyses of the Martian terrain have found inconclusive evidence for the existence organic compounds – so far only finding chlorinated organic matter. The issue for scientists has been that it is not easy to look at simple chlorine-containing organic molecules and determine the origin of the organic compound components.

NASA’s Viking landers in 1976 detected chlorine-containing organic compounds, but they were thought to be chemical left-overs from cleaning procedures of Viking’s equipment before it left Earth. Later, the Phoenix Mission in 2008 discovered chlorine-containing minerals on the Martian surface, but no organic compounds. In 2012 the Mars Science Laboratory Mission detected chlorinated organic matter, but they thought that the analysis process, which involved heating chlorine containing minerals and carbonaceous material together, was producing chlorine-containing organic compounds. Working out whether the source of the carbon found on Mars was carried once again from Earth or was indigenous to Mars remains frustratingly difficult for scientists.

The team carried out their research by subjecting the different types of organic matter to extreme pressure and temperature in a piston cylinder device. They then did a chemical analysis using pyrolysis-gas chromatography mass spectrometry.

The next steps will see the team investigating a broader range of pressures and temperatures, which would help them understand the likely effects of a greater range of meteorite impacts. This would enable them to identify the specific conditions under which organic material may escape the destructive effects of blasts – even when excavated from deep underground by violent events. This could help future Mars missions further refine the types and locations of rocks that they can analyse for signs of past or present life.