Scientists searching for magnetic monopoles - fundamental magnetic particles - have shown they could detect them if they are produced at the LHC.

Magnetism comes with two poles, North and South, similar to the way that electricity comes with two charges, positive and negative. However, while it is easy to isolate a positive or negative electric charge, nobody has ever seen a solitary magnetic charge, or monopole.

The test run showed that a monopole signal would be very clear. We have the capability of finding a monopole if even just one gets trapped.

Scientists have previously suggested that monopoles might be created in high-energy particle colliders like the LHC. If they are, the Monopole and Exotics Detector at the LHC (MoEDAL) experiment is designed to find them.

MoEDAL was tested in 2012, and the first results, published today in the Journal of High Energy Physics, show that it would be able to detect magnetic monopoles.

The detector is made up of two types of materials. The first layer, made of plastic nuclear track detector sheets, would record a trace of a passing monopole. The second layer, consisting of aluminium trapping detectors, would be able to actually trap a monopole.

In order to find a monopole in a trapping detector, it must be taken out of the detector and analysed by scientists with a magnetometer. The results of the test run reported today show that the detectors are relatively free from other intereferences and impurities that could obscure a monopole signature. They also place new bounds on the existence of magnetic monopoles.

Professor Arttu Rajantie, from the Department of Physics at Imperial, is involved with the theoretical aspects of the MoEDAL experiment. For example, his work focusses on how monopoles might be produced and what we might learn if they were detected. 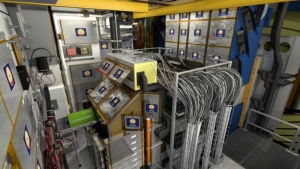 He said: “The test run showed that a monopole signal would be very clear. We have the capability of finding a monopole if even just one gets trapped.”

Spokesperson for the MoEDAL experiment, James Pinfold of the University of Alberta said: “Today MoEDAL celebrates the release of its first physics result and joins the other LHC experiments at the discovery frontier."

The test run for MoEDAL in 2012 used 160 kg of aluminium trapping detectors. The first real experiment phase, run in 2015, used 800 kg of aluminium and monitored the collisions in the LHC for longer.

The LHC was also running at nearly twice the energy of the 2012 run. The detectors have now been taken out of the experiment and analysed for the presence of monopoles.

Finding magnetic monopoles could lead to a whole new type of particle physics, according to Professor Rajantie.

“While the discovery of the Higgs boson in 2012 was a remarkable milestone for physics, the particle itself survives for fractions of a second,” he said. “Monopoles in contrast would be stable, allowing scientists to extract them and potentially run new kinds of experiments.”

Members of the public can get involved in the search with Monopole Quest, they can sort through images from the plastic detector sheets for possible monopole tracks.

'Search for magnetic monopoles with the MoEDAL prototype trapping detector in 8 TeV proton-proton collisions at the LHC' by the MoEDAL Collaboration is published in Journal of High Energy Physics.