The Francis Crick Institute: Smoothing the wheels of collaboration As the first science teams gear up to begin work in the Francis Crick Institute, we hear from one of the leaders helping to kick-start collaboration.

Imperial is one of the founding partners in the Francis Crick Institute, a large interdisciplinary medical research institute based in London’s King’s Cross that will accommodate 1,250 scientists tackling health and disease challenges. The other founding partners are the Medical Research Council, Cancer Research UK, the Wellcome Trust, University College London and King’s College London. 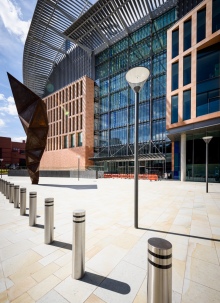 Research at the Crick will help us understand why diseases develop and find new ways to prevent, diagnose and treat illnesses such as cancer, heart disease, infections, and neurodegenerative diseases.

Construction work has now finished on the new building for the Francis Crick Institute next to St Pancras station and the British Library. The start of 2017 will see the Crick up and running, with a steady state complement of 1250 scientists and 250 other staff, and research projects ramping up. It will be the largest biomedical research laboratory under one roof in Europe.

Ahead of these exciting developments, we spoke with Professor Malcolm Irving FRS, Executive Committee member and the first holder of the rotating Associate Research Director (Partner University Liaison) role, representing the three university partners at The Francis Crick Institute.

Firstly Malcolm your own career has been marked by interdisciplinarity as a biophysicist – how did that come about? 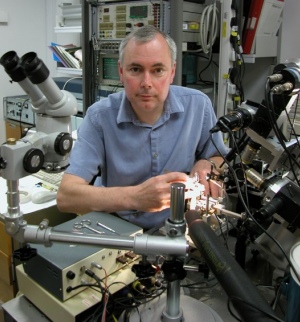 I was a physics undergrad but at the end of my degree I decided that the really exciting bits of science were in biology and that it would be interesting to apply the physics I knew to biology. So I did a two-year masters degree in physiology at UCL. At the time they had a conversion scheme where you did some undergraduate biology, which came in handy as I didn’t even have biology O-level! I then went on to do a PhD in physiology, studying muscle contraction through heat measurements – which established a theme and an approach for much of my future research. I then got a NATO SCRC travelling fellowship, and spent time at UCLA and Yale, before coming to the MRC Cell Biophysics unit at King’s College London set up by John Randall. John, another physicist turned biologist, led the King's team that worked on the structure of DNA and his deputy, Maurice Wilkins, shared the 1962 Nobel Prize with Watson and Crick.

So interdisciplinarity is not new of course, but the scale has changed and the reach and breadth has changed – it’s so much bigger now.

When did you first hear of plans to create the Francis Crick Institute?

Interdisciplinarity is not new, but the scale has changed and the reach and breadth has changed - it's so much bigger now

Way back when it was a smaller scale scheme, as part of the Medical Research Council’s (MRC) plan to move the National Institute of Medical Research to central London. I got involved because there was a bidding process between some London universities as to who would host it, with UCL prevailing. Then the project grew to involve Cancer Research UK which would bring in its London Research Institute and Clare Hall labs. At that point King’s and Imperial were outside and I remember feeling rather disappointed to be on the outside, watching from afar. There was a successful fundraising campaign just before the financial crash and plans came into view for the larger scale Francis Crick Institute and Imperial and Kings were invited to join. I remember there was an internal debate at King’s about whether we should join as there was a considerable cost to joining, matching that of UCL, but luckily both Imperial and King’s decided to come on board. Since then, we’ve been really focussed on this for five or six years and we’re now at the really exciting point of the building being handed over, with people moving in.

Did you always take the view that interdisciplinary research could be painted on a larger canvas?

Yes, but that idea was already in the original proposal and stems from the MRC’s realisation that their home at Mill Hill, being far away from any hospital, was not the best place to build links with experimental medicine and clinical applications. When King’s and Imperial joined it was already on the agenda to create two kinds of interdisciplinary partnership – one at the clinical interface and another at the physical sciences interface. The universities are key players in both interfaces.

It’s also important to note that although the Crick is large, it is still smaller than the biomedical research in any of the partner universities; and by staff numbers the Crick is less than 10% of each. The Crick has the advantage of being a core funded institute, which gives it independence and an arm’s length relationship with its funders. So instead of everything being response-mode grants you can do longer term, higher risk and potentially blue skies projects. It has very good quality facilities, but of course the partner institutes also have good facilities, indeed ones that the Crick doesn’t have, for example in engineering and nanotechnology.

So there needs to be cross talk?

Yes, absolutely and the cross talk goes both ways. University group leaders and PIs often only think of the possibility that staff from the universities could be seconded to the Crick– actually it can work in the other direction and there is great long-term potential there. There’s no reason why someone from a Crick lab couldn’t work in a much more clinically orientated group in one of the universities or their associated Academic Health Science Centres (AHSC) for a few months to better understand a clinical application, crystallise a protein that they’ve found, take their cells to an optical imaging lab or do a bit of clinical genetics.

So absolutely I see it as a two-way process – although clearly we’ve started very strongly with the universities-to-Crick direction as that’s the first step.

I’ve already heard anecdotally about early projects discussions between say biologist and mathematicians – so the foundations are there?

Yes, and those discussion chats should go on because this process of secondments, joint PhD projects and joint research projects should be dynamic. It shouldn’t be the universities sending someone to Crick and they stay there for 20 years.

The way that everyone will get most value out of this is if people go backwards and forwards; some of those visits will be short term, others long term. Then when they come back − in either direction − they bring back with them a new technique they’ve learned, a new perspective they’ve got, or access to a bit of technology, which they go on using on a part time, opportunistic basis. They come back and tell other people about it, who then think: ‘Well I could do that too’.

A really important part of it is communications and networks. There’s lots of researchers in the three universities who could potentially gain from the Crick. If 1% of our researchers were at any one time working in Crick that would probably be at capacity. So the job is to find the 1% who could gain the most from a transfer and keep changing the 1% so it’s always the most productive 1%. It’s a fantastic opportunity for career development too.

The partner universities are clearly competitors on the global stage but do you think the Crick will encourage more collaboration within London?

I have noticed in the last five years a decrease in the competitive spirit between the partner universities and an increase in the appetite for collaboration. I’d like to think Crick has been a catalyst but there have been multiple drivers, for example with changes in funding landscape and the increase in large strategic or portfolio funding calls. For those you often need to get together with suitable partners in order to provide all the elements at the required level of excellence. Also it makes sense to avoid duplicating large platforms, such as PET and MRI facilities, latest generation electron microscopy or high throughput sequencing. These facilities need refreshing frequently and yet are very expensive to upgrade. So there are substantial economies of scale and Crick is leveraging that.

You’re on the Executive Committee of the Francis Crick Institute and its Associate Research Director (Partner University Liaison) – how do you interpret that role?

What we clearly need is to facilitate interactions between the universities and the Crick − and the liaison job is to a large extent trying to bridge the cultural and organisational gaps that exist. The Crick as a core-funded, independent institute feels a lot different from the universities, and group leaders at the Crick have a slightly different approach to their research than typical PIs in universities. Universities of course have a much wider agenda and different ways of looking at related problems.

There are some areas where we can usefully learn from each other and share things and other areas where we have different priorities and different perspectives. So I see part of my role being to sit at the Crick table and bring the university perspective − which is often just something that they haven’t thought of which is obvious to people at universities. And it works the same way the other way round. At the moment for example we’re all discussing our response to Brexit: the universities and Crick have some common anxieties and issues, for example changes to EU funding and ERC grants, and they have some distinct perspectives, for example the universities are more concerned about the undergraduate population.

There’s clearly great potential to develop new therapies at the Crick, how to you realise that?

There’s huge potential and I don’t think anybody underestimates either the potential or the difficulty in delivering it – which is also huge. The three universities have well developed AHSCs, facilities for experimental medicine – basically everything you need to take the discoveries from the Crick labs to the clinic. We’re probably as well placed in terms of infrastructure as the innovation clusters in Boston or San Francisco, but we haven’t got so far along the path of doing it, and so it’s going to take a while to establish the links. But there’s great incentive to do it; it’s part of the mission statement of the Crick writ large. Indeed, the three partner universities are currently in the process of renewing their Biomedical Research Centres (BRCs), so there’ll be a bit more clarity in a few months’ time with regards to how the BRCs can be the vehicle for clinical translation of some of that Crick research.

Are there any other challenges?

There’s one area of challenge, and I don’t want to over-emphasise it, but in the longer term we need to identify more strategic funding sources for the joint research activity. A very fundamental challenge is how you bridge the gap between a core funded research institute and a mainly response-mode funded university trio. I don’t think that there are good working examples anywhere in the world for us to follow - especially not examples where a core funded research institute is trying to work with three universities and to find the best way to fund the interface activity. Some of the potentially most valuable research opportunities at the interface are difficult to fund through normal response-mode or project grants, so we need to be innovative and think of new ways to fund things at the interface. We’re trying to understand the best way to do that.