Proteins are molecules found within every cell in the human body that carry out a wide range of functions essential for life. Many proteins have an ‘active site’ to which other molecules bind, enabling them to perform different functions, such as catalysing biochemical reactions or regulating gene expression.

Disrupting the signal in proteins could inhibit their function, effectively targeting diseases where proteins are malfunctioning.

Active sites are often targeted by drugs designed to combat a host of diseases caused by malfunctioning proteins.

However, some proteins also have additional sites to which other molecules bind, causing the protein to shift its shape and altering the functionality of the main active site.

For example, a protein can be ‘activated’ or ‘deactivated’ through this additional binding. This process is known as ‘allostery’, and these additional allosteric sites are often far away from the main active site in the structure of the protein.

Many proteins are known to have allosteric sites, and these are crucial to biological function. However, the big mystery has been how to predict if and where such allosteric sites exist, and how signals travel across the protein from allosteric sites to the active site.

Now, researchers at Imperial College London have used sophisticated mathematical methods to accurately trace the allosteric signals through proteins. Their method, published today in Nature Communications, not only allows them to track the signal by identifying the chemical bonds involved, but also predict new allosteric sites.

Allosteric sites are a potentially exciting new target for drugs, since they allow greater flexibility than active sites. The structure of active sites may be shared across several proteins, meaning any drugs targeting that particular structure could have side effects, whereas allosteric sites are more specialised and targetting them could minimise unwanted interferences.

Study co-author, Professor Mauricio Barahona from the Department of Mathematics at Imperial has been working on the underlying mathematical tools, and has already applied them to the study of traffic jams and cascading failures in electrical grids. 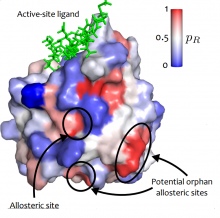 He said: “The concept is the same in all these cases: we look at how a signal travels within the graph structure, whether that’s cars in the road network of a city, electricity in the power grid, or fluctuations in the chemicals bonds in the structure of a protein.

“When a line is tripped in a power grid, it can have its largest effect on a distant part of the network. The same principle is at play in allostery.”

Professor Sophia Yaliraki from the Department of Chemistry at Imperial, who has been working on the underlying chemical theory, added: “The purpose of modelling in each case is to figure out how to interfere with the signal – either to enhance it or disrupt it. Disrupting the signal in proteins could inhibit their function, effectively targeting diseases where proteins are malfunctioning.

“This depends both on the specific atomic-scale structure of the protein, as well as its overall three-dimensional shape.”

The mathematical models work by mapping influencers – in this case which chemical bonds influence other bonds in response to a propagating signal from the active site. Despite the large amount of information required, the computational method is “incredibly efficient” according to Professor Yaliraki, allowing signal pathways in large complex proteins to be mapped in minutes.

The researchers have applied the model to many known allosteric sites, and found they were able to accurately predict their existence and position. Now, they are applying the methodology to proteins that are not yet known for allostery in the hope of identifying new targets for drug development.

The work is a collaboration between researchers in the Departments of Chemistry and Mathematics, enabled by the EPSRC-funded cross-disciplinary Institute for Chemical Biology at Imperial.