Bioengineering PhD student and Army Captain Dave Henson MBE won a bronze medal in the T42 200m at the Paralympic Games in Rio this week.

PhD student Dave, who previously completed an MSc at the College, contributed to team GB’s record medal rush at the games with a strong finish in the 200m final to join compatriot and gold medallist Richard Whitehead on the podium.

Dave dug deep to dip under the 25 second barrier for the first time, achieving a personal best time of 24.74 seconds. 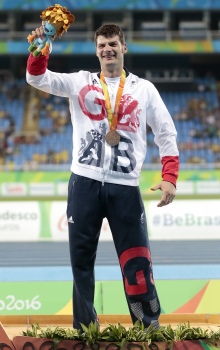 Speaking to British Athletics, Dave said: “It was tight for the medal – I wasn’t convinced I’d got it but I carried that belief all the way with me during the race. I wasn’t going to leave here without a medal and I get to take a ‘Tom’ [soft toy mascot] back to my daughter as well.

“It has definitely been a journey – there have been a hell of a lot of cold and wet mornings going training working with my coach (Roger Keller) with the sole purpose of getting here. Rio 2016 was always the aim but some people thought Tokyo was more realistic. With hard work and determination you can prove people wrong. I am here with a bronze medal around my neck, I mean they don’t give these out, you have to work hard for them.”

Since beginning his PhD in 2015 Dave has balanced his athletics and his research which led to him qualifying for the Rio games earlier this year. Professor Anthony Bull, Head of the Department of Bioengineering, is Dave’s supervisor at Imperial, and paid tribute to his achievement.

Dave is not only an inspiration to his research group colleagues, but also to the whole Department of Bioengineering.

“Dave is not only an inspiration to his research group colleagues, but also to the whole Department of Bioengineering. He epitomises what Channel 4’s coverage of the Paralympics calls ‘the superhumans’ and I am not referring only to his speed on the track. Anyone who heard Dave’s post-race interview will know that he is someone who thinks about the bigger picture and I know that he is not only a successful athlete, PhD student and father, but also contributes far more widely in advocacy and support for others who have been severely injured in conflict.

“We are proud to be associated with Dave Henson and look forward to him returning (with his medal) and spending a little more of his precious time on his research!

Paralympic swimmer Andrew Mullen also secured a bronze medal in the Men’s 200 Freestyle S5 this week. Andrew has been working with Imperial students over the past few years to develop a number of innovative devices to help him in competition, training, and generally getting around.

Andrew has two more shots at adding to his medal tally with the 50 backstroke on Friday and 100 freestyle on Saturday.