Imperial houses some of the most advanced, energy-hungry equipment in all of London. There’s ‘Cerberus’, the UK’s most powerful non-military laser, based in the Physics Department; the Data Centre with rows upon rows of high performance computing (HPC) servers that need 24-7 power and cooling; and across College there are freezers full of important biomedical samples and cells.

This means that planning for the College’s energy and heating demands is a particularly… demanding task, which falls largely to a team of engineers and experienced project managers in Estates Facilities. 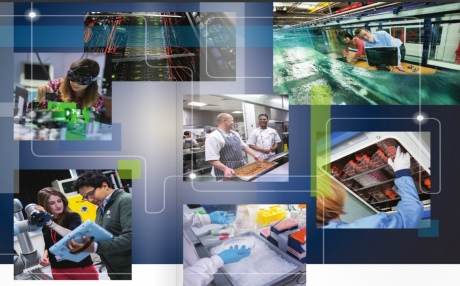 Back in 1999 it was decided that the College should replace the old boilers that burned heavy oil to heat water and also look for a supplementary source of electricity to work in concert with the grid. This was achieved with the installation of a Combined Heat and Power (CHP) plant, which has recently been replaced with a new, more efficient design.

“Typically in your home, you will get electricity from the National Grid which might for example be generated in gas-fired power stations in the Midlands, as is the case for many homes in London. When the plant burns gas, all the heat goes up the chimney and is wasted – and the electricity is then transmitted long distance. So overall, from the fuel source to your house, it’s about 40% efficient.

“Given the College’s very large demand for heat and power, we really need to be employing more efficient solutions and CHP fits that bill as it generates electricity for us to use on site but also captures most of the waste heat from burning gas which we can use for heating buildings, producing hot water and generating steam for autoclave facilities. Crucially, we think our new system will be around 80-90% efficient overall.” 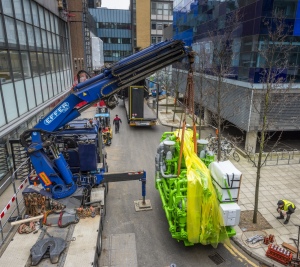 Lifting one of two CHP engines

Central to the new CHP project has been data gathering and metering across the site. Before any new energy solution was considered it was important to get a more detailed picture of how the College uses energy and heat and at what times.

Andrew and team completely re-designed how they capture, store and output data – with a new system and software now rolled out to most of Imperial’s Campuses.

“All our buildings are controlled by one central building controls system that turns on fans, pumps, and so on. It’s very big and very complex. We did a lot of work optimizing those controls; essentially making sure that we turn things off when there’s no requirement and reduce the amount of air going to labs when they are empty for instance. We’ve also done work in all the plant rooms to change how that system interacts with the building.”

Having set the system up and collected data for an extended period they then fed into the College’s 2014 Site Energy Strategy carried out in collaboration with engineering consultants Arup. The strategy examined a broad range of technologies for potential use at College, including solar photovoltaics (PV), biomass, borehole aquifers, and CHP, and also factored in external variables such as projected gas prices. 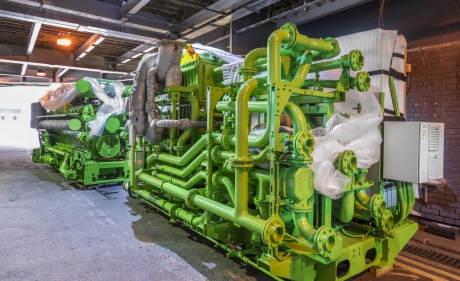 The strategy board then decided the best thing to do practically, economically and in terms of curtailing carbon emissions for the next 20 years.

It quickly became clear that some options would simply not be feasible for the South Kensington site – for example generating our energy from biomass sources would require the delivery of 17 articulated lorry-loads of biomass per day to the campus with a substantial increase in traffic.

The recommended course of action was the installation of the latest CHP technology – in combination with other efficiency gains, for example replacing fluorescent lighting with LEDs, something that is already happening at College.

The new CHP plant will fire up in October, ready for the winter season. Andrew says that conservative estimates suggest the engines will meet around 75% of the South Kensington Campus’ electricity requirements and a high percentage of waste heat will be utilised in meeting the campuses heating requirements. Indeed, there could be a surplus of heat, and the team is looking at ways of maximizing that capability.

Currently there are water and steam networks which service radiators, hot water taps, autoclaving, cooling absorption chillers and air handling units. The team are considering extending the heat network under Exhibition Road to Princes Gardens, encompassing Halls of Residence and Ethos – which, with its constantly running showers, is major heat user.

Imperial’s CHP plant is one the largest in central London – but it’s not alone. The Shard building has its own CHP plant, as does Citibank for backing up its vital financial servers. Meanwhile, more individual homes and local communities are looking for ways to achieve a greater level of energy independence, particularly with smallscale, off-grid renewables such as solar photovoltaics. 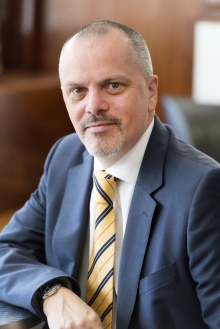 We asked Professor Timothy Green, Director of the Energy Futures Lab at Imperial, if this trend for decentralization is likely to continue apace.

“London and the Southeast are short of generation as there are not many power stations in the area, so we import much of our energy.

“A lot of organisations are looking at on-site generation from renewable sources, such as solar PV − but it’s not necessarily easy in city centres; you’ve got tall buildings with large occupancy and a relatively small roof space, so PV helps but it’s hard to make a big contribution. I think this is all part of a move to a more decentralized electricity system and energy system more generally.”

Nevertheless, Tim believes we will retain big power stations – ideally alongside a more advanced grid that can connect large scale gas, nuclear, wind and solar so they can better complement each other at different times of the day. If it’s not a very windy evening you can fall back on nuclear for example to cook dinner.

As part of the ongoing dialogue about our energy requirements he says that community groups can have an important role to play – and cites the example of his own home village of Balcombe in West Sussex. Following a successful test bore for shale gas a few years ago, the village saw some of the biggest protests in the UK against extracting shale gas using ‘fracking’.

“Ultimately it made many people in the village think about where they got their energy from and what sort of energy they wanted to use – perhaps they were against exploiting shale gas, but what were they for?

“So a group of people set up a community group called Repower-Balcombe, which started putting up solar PV on the roof of the school and some farm buildings – just trying to get toward energy self-sufficiency. But they quickly realised that PV works well works in the middle of the day but that they would need to import power to sell to residents in the evening. So what would be the best option? A contract with a nearby wind farm or gas-fired power station?

“The important point is that people started to think about where their energy came from – not just assuming it’s over the horizon somewhere. Community energy starts to engage people in that debate about what we’re in favour of – and we need to do that because there are some big transitions coming.”