It’s been splashed across the papers – traffic pollution is a menace. Striking 30,000 of us each year with heart disease, respiratory illnesses and lung cancer, vehicle fumes kill four times as many people as car accidents and hospitalise a great many more.

At the beginning of my PhD my supervisor asked me to conjure up an image of traffic and tell him where I thought those fumes came from. Picturing a trail of lorries trundling up the motorway, I confidently answered that they came from the exhaust pipe.

Now I wasn’t wrong – those lorries would have produced half a kilogram of exhaust per mile travelled – but I really wasn’t considering the full picture. I hadn’t thought about the wear and tear that occurs each time the clutch is released or the brakes are squeezed, the friction that shears at the tyres and the road surface or the dust that the wheels kick up. I certainly hadn’t realised that the particles that these processes create represent more than half of vehicle emissions. 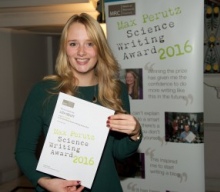 The problem is that neither have my colleagues and neither have our policy makers. Think of all those headlines warning of the dangers of exhaust emissions: ‘Diesel is killing thousands!’, ‘Exhaust causes cancer!’. Have you ever read that about brake dust or tyre wear?  No, because air pollution scientists are caught in a diesel storm, and despite knowing that non-exhaust particles have toxic properties, haven’t got round to seeing what that other pollution does to people’s lungs.

That is what my research is about: discovering the other half of the story and providing the policy makers with evidence that we need to regulate wear particles as well as exhaust fumes. Otherwise it’s like removing the nest but leaving the wasps behind – as diesel emissions decrease, non-exhaust particles will remain in the air and our hearts and lungs will keep getting stung.

Our lungs are defended by macrophages – caretaking cells that hoover up inhaled germs and particles, protecting us from chest infections and keeping us breathing smoothly. In the lab I sprinkled brake dust, particles produced when brakes and wheels press together, onto these cells and found that they could only hoover up a quarter of the germs that they usually can.

I also noticed that brake dust encouraged the macrophages to release alarm signals called cytokines, which call the rest of the immune system for assistance, and damaged energy production, forcing the caretaker cells to enter self-destruct mode. The most important discovery however, was that brake dust impacted all of these functions to the same extent as our old friend, the diesel exhaust particle.

Worryingly, this means that brake dust is as capable of causing what I call ‘London Throat’ – the constant froggy feeling and string of coughs and colds that city dwellers endure – or the same deadly asthma attacks as diesel exhaust. It also means that brake dust contributes to the £62 billion that we spend each year on pollution-related healthcare.

As a non-exhaust enthusiast, my supervisor was very excited to hear this and through mutterings of “I told you so!” suggested we delve further to see why brake dust is so toxic. We found that brake dust is made predominantly from metals and that blocking those metals chemically was like bacon to a hangover. Without its metals, brake dust had no impact on germ hoovering, cytokine production or cell survival. This showed that metals are responsible for brake dust toxicity and suggested that we ought to be worrying about other metallic pollutants like clutch and road wear too.

The importance of these findings are easiest to understand when you consider all of the improvements that stemmed from matching investigations into exhaust toxicity. Policy makers responded by introducing diversions for the fumiest vehicles, surcharges for diesel car parking, fleets of ‘green’ buses to replace the older polluting ones, and charging points for electric vehicles popped up like daisies.

But like a pessimist at a party, my research has shown that these interventions aren’t enough. People who live in low-exhaust areas will still be inhaling dangerous pollutants and unless we tackle those emissions too, our health and our economy will continue to feel that sting.

This post has been adapted from the MRC Insight article Braking perceptions of traffic pollution and reproduced here under CC BY 4.0

The Medical Research Council's 'Max Perutz Science Writing Award' aims to encourage and recognise outstanding written communication among MRC PhD students. The annual competition challenges entrants to write an 800-word article for the general public answering the question: 'Why does my research matter?'.