The 102-year old ecologist graduated from Imperial College London with a BSc in 1935, completing his PhD in 1941. When he was a student, the trip from Australia to Britain took 11 days: it now takes less than 24 hours. 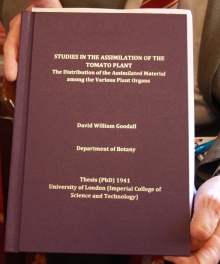 The thesis was a gift from Imperial’s President Alice Gast, who led major alumni events in Sydney and Perth in September.

The Imperial College Alumni Association of Western Australia (ICAAWA) presented the gift at a special lunch after Professor Goodall was unable to attend the September events. 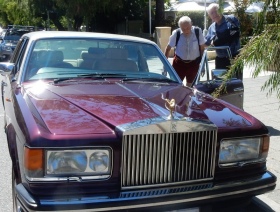 The event took place at the Celtic Club in West Perth. Dr Goodall caught a lift to and from the event in a Rolls Royce driven by Alan Dickson (Mining and Mineral Technology 1968).

Dr Ian Merker (Electrical Engineering 1967, PhD Material Sciences 1972), chair of ICAAWA, said: “We were all overawed by David’s wisdom. The lunch was perfect - we really surprised and delighted David with his Imperial College thesis re-presentation; he was an inspiration to all of us younger than 103.”

The alumni group is planning further get-togethers in the Perth area, including one this April to coincide with Dr Goodall’s 103rd birthday. 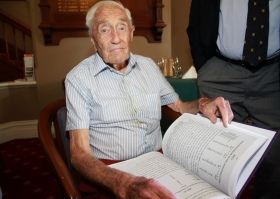 Dr Goodall, an honorary research associate at Edith Cowan University’s Centre for Ecosystem Management in Perth, maintains an active professional schedule, editing the Ecosystems of the World series for Elsevier since 1974, reviewing journal papers and supervising PhD students in botany.

During his eight decade academic career to date, Dr Goodall has won international plaudits for his contributions to understanding of plant biosystems. He has worked in Britain, the United States and Australia, and received an honorary doctorate from Italy’s Università degli Studí di Trieste in 1990.

Outside of his scientific work, Dr Goodall is a Shakespeare buff, poetry enthusiast and adventurous traveller, recently visiting the Abrolhos Islands, a coral and wildlife-rich chain of uninhabited islands 60km off Australia’s west coast.

He received the Order of Australia in 2016.

Alumni can get in touch with the Perth group here.