Patients blighted by hay fever could markedly reduce symptoms after a three-year course of treatment, but not after two years of treatment.

Previous research has shown that a type of immunotherapy that exposes patients to increasing amounts of grass pollen over time is an effective way to reduce severe symptoms in the long term.

“Exposing people to grass pollen in this way is a very effective treatment for people who really have debilitating hay fever.”

But in a new study, published today in the journal JAMA, scientists from Imperial College London have found that a two-year course of treatment is not enough to achieve lasting effects, bolstering previous findings that more time is needed taking the medication to get lasting benefit.

“You treat patients for three years and then they have a big improvement in their hay fever for several years afterwards,” said Professor Stephen Durham, Head of Allergy and Clinical Immunology at the National Heart and Lung Institute at Imperial and clinical lead for allergy services at Royal Brompton Hospital, who led the study.

“Exposing people to grass pollen in this way is a very effective treatment for people who really have debilitating hay fever.”

Building resistance: About the study

Hay fever, or seasonal allergic rhinitis, affects as many as one in four people in the UK, leaving sufferers with bouts of sneezing, runny nose and itchy eyes – all of which can affect work, school and leisure during the summer months when the pollen count soars.

In the majority of cases in the UK the culprit is grass pollen, which the body recognises as an invader, launching an immune response.

A number of over the counter medications are available, such as nasal sprays and antihistamine tablets, but patients with more severe symptoms can be treated with immunotherapy, using a similar approach to the one trialled in children with peanut allergies.

By exposing their immune system to grass pollen extracts over time they are able to build up their resistance, either through injections or a pill containing pollen extract.

The latest study involved patient volunteers at Royal Brompton Hospital in London, which runs a world-class allergy clinic, researchers tested the effectiveness of two immunotherapies prescribed by the NHS which use grass pollen extract: an injection and a pill taken under the tongue.

It was the first head to head trial of the two therapies, in which researchers set out to see if a two-year treatment could achieve the same long-lasting benefits to patients as seen with three-years of immunotherapy, potentially leading to clinical cost savings.

The study was a double blind, placebo-controlled trial in which 106 patients were randomised to one of three treatment groups: injection, tablets and placebo.

Patients had moderate to severe hay fever and were administered either the daily oral treatment, weekly injections for 15 weeks followed by monthly boosters, or a placebo. A total of 92 patients completed the study.

After a two year course of treatment, the results showed that both therapies were effective at tackling symptoms, with patients reporting a dramatic improvement in their quality of life. However, one year after patients had stopped taking the medication the effects were no better than the placebo group.

In order to get the long-term clinical benefits after stopping the treatment, you have to take it for three years

“Hay fever causes major impairment of sleep, work and school performance and leisure activities during what for most of us is the best time of the year,” said Professor Durham.

“Most people respond to the usual antihistamines and nasal sprays, although there is a portion who do not respond adequately or who have unacceptable side effects to the treatment.”

Describing the current findings, Professor Durham said: “This study shows that whereas both immunotherapy treatments were highly effective, two years of treatment was insufficient for long-term benefits.

“Clinicians and patients should continue to follow international guidelines that recommend a minimum of three years’ treatment.”

Previous studies published by Imperial researchers have shown the long-lasting benefits of both immunotherapy injections and pills for severe hay fever – benefits which persist for at least two to three years after the treatment has stopped.

Professor Durham added: “We have reconfirmed that both treatments are effective but that in order to get the long-term clinical benefits after stopping the treatment, you have to take it for three years.”

Researchers at Imperial have a long legacy with immunotherapy dating back to 1911, when a grass pollen injection treatment was first shown to be highly effective in treating hay fever.

'Hay fever has a massive impact on my lifestyle'

Max Warner, 51, who lives in London, had successful results in improving his symptoms of hay fever by receiving injections of grass pollen immunotherapy as part of the randomised, placebo-controlled trial over a three-year period at Royal Brompton Hospital.

“I’ve been allergic to grass pollen ever since I can remember,” explained Mr Warner. “Hay fever has a massive impact on my lifestyle and I choose to work from home because of it, I just find commuting through central London worsens my symptoms. I suffer with irritability, sneezing, wheezing and at times this can manifest into a tightened chest where I feel as if I can’t breathe properly, especially during summer.” 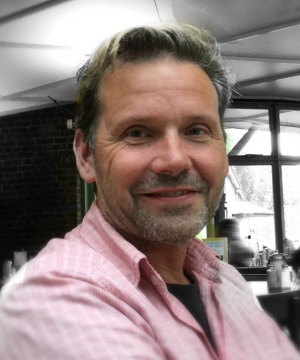 Mr Warner was first tested for his sensitivity to pollen at Royal Brompton Hospital when doctor’s sprayed pollen up his nose to compare his reaction before he began receiving injections to his reactions a year into receiving the hay fever treatment.

“My hay fever symptoms improved over the two years of having injections and the following year as well. My hay fever season can start in April and not finish until September. May, June, July and August are obviously the peak months and these peaks took place during the trial where I felt no symptoms in April or September.

“In the peak months I had less of a blocked up nose; less of a runny nose, less, if any, sneezing, no irritable or watering eyes, no tight chest and just generally much less of a sense of feeling unwell and having less energy throughout the grass pollen season.

“My reaction to pollen had decreased an incredible amount,” said Mr Warner. “I really did feel a huge improvement and was relieved to discover I had received the immunotherapy treatment. Last summer [after the trial had finished] I was back to taking antihistamines and was shocked with how bad my symptoms were.”

He added: “They are a fantastic team at Royal Brompton. Everyone who was participating felt confident that we were doing something that would make a worthwhile improvement to our health and the health of others. If I had the opportunity, I would carry on receiving the injections.”

‘Effect of 2 years of treatment with sublingual grass pollen immunotherapy on nasal response to allergen challenge at 3 years among patients with moderate to severe seasonal allergic rhinitis’ by G. Scadding et al, is published in the journal JAMA.

Daily Express - HAY FEVER JOY: Sufferers can 'suppress' the condition with pollen pills or injections BBC - The World At One (from 22:50) Daily Mail - Could this spell the end of hay fever? Sufferers can 'suppress' their allergies through a 3-year course of pollen pills or injections Daily Telegraph - Pollen pills suppresses hay fever for years - new report The Independent - Hay fever symptoms can be significantly reduced after three years of treatment, research suggests The Sun - A JAB FOR THAT Three years of pollen injections 'could end the misery of hay fever for millions'