The Royal College of Music next to Imperial

A joint venture between the Royal College of Music and Imperial was awarded &pound;1 million for a new research project on the arts and health.

The project at the Centre for Performance Science, a cross-institutional partnership between the Royal College of Music (RCM) and Imperial College London, will explore the impact of the arts and culture on health and wellbeing, from individual, social, and economic perspectives.

One area the team will study is the link between cultural pursuits - like joining a choir, learning an instrument, or attending art classes - and the health and wellbeing of society. The work will be funded by the Arts and Humanities Research Council (AHRC). 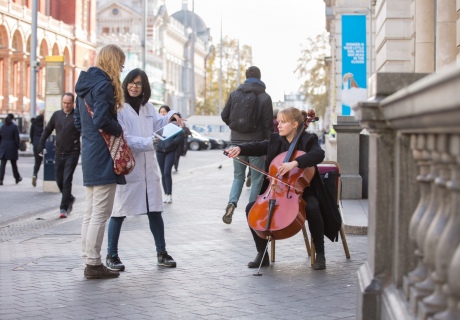 A scientist and a musician speak with museum-goers on Exhibition Road, South Kensington, representing the partnership between Imperial and the RCM.

Smaller arts intervention studies have previously found links between cultural participation, good health, and lower mortality. However, to date there have been few larger-scale studies involving the arts across the UK. This study will gather new empirical and qualitative data from people over three years.

Professor Aaron Williamon, principal investigator of the project from the RCM, said: “We are keen to discover not only the effects of culture on health and happiness, but why those effects happen. For example, joining a choir after work may improve your health, but is that the result of socialising, creating something, or a combination of the two? Why might joining a choir have more social and creative benefits than going for a meal with friends?”

This...is a major success for our new Centre for Performance Science, and will further deepen the relationship between Imperial and the RCM.

Other cultural pursuits the researchers will explore include going to museums, galleries, and concerts.

Professor Robert Perneczky, co-investigator of the study from Imperial’s School of Public Health and the University of Munich, said: “We are interested in what hidden benefits the arts and culture may have in terms of improving health. If there are tangible benefits, there may be a case to be made for integrating them more fully within social and health services. It be will interesting to see if arts and culture can increase our resilience against age-associated changes of wellbeing and cognitive performance, a phenomenon known as cognitive reserve.”

The Centre itself draws on its members’ expertise in the arts, medicine, engineering, natural sciences, and business from across the RCM and Imperial.

Professor James Stirling, Provost of Imperial College London, said: “This funding announcement is a major success for our new Centre for Performance Science, and will further deepen the relationship between Imperial and the RCM.”

The Health, Economic and Social impact of arts engagement (HEartS) project will investigate: