A method for predicting someone's 'brain age' based on MRI scans could help to spot who might be at increased risk of poor health and dying earlier.

By combining MRI scans with machine learning algorithms, a team of neuroscientists led by researchers at Imperial College London, has trained computers to provide a predicted ‘brain age’ for people based on their volume of brain tissue.

When the technique was tested on a study population of older adults in Scotland, they found that the greater the difference between a person’s brain age and their actual age, the higher their risk of poor mental and physical health, and even early death.

The researchers stress that while the technique is a long way from being used in clinical practice, they are hopeful it might one day be used as a screening tool, helping to identify those at risk of cognitive decline and dying before the age of 80, providing an opportunity for early intervention. 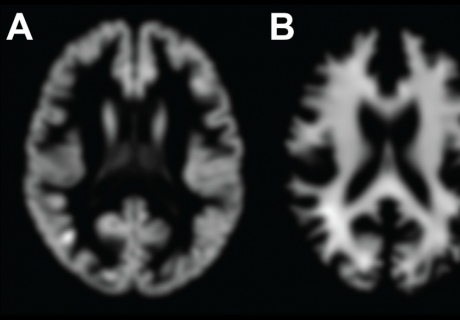 Scientists around the world are working to find reliable biomarkers that can be used to measure age, such as from blood and hair samples. In the latest study, published today in the journal Molecular Psychiatry, researchers from Imperial and the University of Edinburgh have added a neuroimaging approach to the growing gerontology toolkit.

“We've come up with a way of predicting someone’s brain age based on an MRI scan of their brain,” explained Dr James Cole, a research associate in the Department of Medicine, who led the study.

“Our approach uses the discrepancy between their chronological age and what we call their brain-predicted age as a marker of age-related atrophy in the brain. If your brain is predicted to be older than your real age than that reflects something negative may be happening.”

At the heart of the approach is a technique first developed in 2010 that measures brain volume and uses machine learning to estimate the overall loss of grey and white matter – a hallmark of the ageing process in the brain.

Dr Cole took this basic technique and refined it by testing it on publicly available datasets of MRI scans of more than 2,000 healthy people’s brains, resulting in normalised maps which accurately predicted the person’s age.

Following this fine-tuning, it was then applied to scans of 669 people from the Lothian Birth Cohort 1936, a well-studied group of adults all born in 1936 who had undergone MRI scans at age 73, giving them a score for predicted brain age.

Analysis revealed that those with a brain age older than their chronological age performed worse on standard physical measures for healthy ageing, including grip strength, lung capacity and walking speed.

Crucially, those with ‘older brains’ were statistically more likely to die before the age of 80, with the average discrepancy between brain age and chronological age being eight years for deceased males and two years for deceased females.

If the initial findings could be applied to a screening programme, the technique could be used to inform health practitioners, showing whether or not a patient had a healthy brain age or was above or below the line, similar to how body mass index (BMI) is used today.

“In the long run it would be great if we could do this accurately enough so that we could do it at an individual level,” said Dr Cole. “Someone could go to their doctor, have a brain scan and the doctor could say 'your brain is 10 years older than it should be’, and potentially advise them to change their diet or lifestyle or to start a course of treatment. However, at the moment, it's not sufficiently accurate to be used at that sort of individual level.”

If your brain looks older than it should do, it could be an indication that something bad has happened or is happening

The team is now looking to refine the technique further, incorporating different types of imaging, such as diffusion MRI scans, to improve accuracy.

Currently, the high cost associated with MRI scans inhibit the technique’s use as a screening tool in the near term, but large scale projects such as the UK Biobank demonstrate the economies of scale that could help reduce the costs in future.

The researchers also stress that while the technique has great potential, there is still a relatively large margin of error, with the absolute error in determining brain age across all of the MRIs found to be five years.

“People use the 'age' of an organ all the time to talk about health,” explained Dr Cole. “Smokers are said to have lungs that are 20 years older than they should be, you can even answer online questionnaires about exercise and diet and get a 'heart age'. This technique could eventually be like that.”

Dr Cole added: “It could be that if your brain looks older than it should do, it could be an indication that something bad has happened or is happening and should put you more at risk of age-related brain disease or cognitive impairment, and the data we have so far seems to back that up, at least at the group level.” Live Science - What Your 'Brain Age' Means For Living Longer MailOnline - Are YOU at risk of an early death? New method to predict ???brain age??? could determine who is likely to die young New Atlas - &quot;Brain age&quot; found to be a predictor of death The Guardian - People whose 'brain age' is older than their real age more likely to die early The Herald - Brain scans 'can identify those at risk of early death', according to study of 669 Scots The Sun - WILL YOU DIE YOUNG? MRI scans that ?predict your brain age? could spot who?s at risk of early death, doctors hope The Times - Brain test will warn patients of death risk