Struggle with the Big Bang theory or dark matter? Now you can explore cosmic concepts with your mouth, thanks to physicists and gastronomic chefs.

Imperial physicist Dr Roberto Trotta has partnered with gastronomic chefs at Kitchen Theory to bring the universe to the masses, in the form of edible metaphors. Hayley Dunning spoke to him about how the idea came about and how it evolved into a multisensorial experience of taste and science.

What is g-ASTRONOMY and how did it come about?

We have all these ideas and concepts in cosmology that are big and far away, and we primarily perceive them through light or digital representations of our universe. A lot of times there is a barrier for the public to relate to these concepts. Vision is but one of our senses – I wondered if we create metaphors or other ways of talking about cosmology that do not just involve sight but other senses, such as taste and touch.

It’s no longer this big conceptual, intellectual and mathematical fearsome beast, it becomes something you can relate to, and I think it’s a useful tool to lower barriers to science.

I met Jozef Youssef, who is the chef patron of Kitchen Theory, at the Cheltenham Science Festival in 2015, where he was presenting his work with another researcher, investigating multisensorial aspects of dining, such as whether stroking a smooth or rough surface changes your perception of the taste of what you are eating.

I wondered whether we could use some of this for astronomy. Was it possible to create edible representations of dark matter, dark energy or the Big Bang that would be in some sense metaphorically accurate, and equally give a fun, engaging and delicious experience for everybody?

So, I approached him and said: ‘Have you ever thought about making a dish based on dark matter?’ He said: ‘No I haven’t, but we can!’

That’s how the partnership, now called g-ASTRONOMY, started. Jozef and his development chef, Stefano de Costanzo, bring insights into multisensorial experimental gastronomy, and I bring astrophysics, and the love for food as well!

Can you explain a couple of the different ways in which you have represented physics with food?

So far we have focused on ‘tableau displays’ of cosmic ideas. For example we had a cocktail called 13.796, which is the age of the universe in billions of years. The cocktail was served in martini glasses that are small at the bottom and open up, just like the universe expanded over time.

The cocktail was an edible representation of the cosmic timeline. It had three different layers that would not mix because they had different densities, with the most dense at the bottom and getting less dense as you go up the glass, just like the universe became less dense over cosmic time. 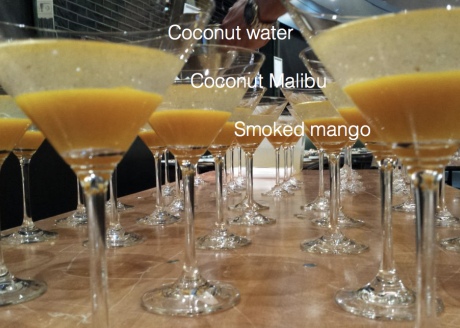 The bottom layer was made of a beautiful mango puree with whiskey smoked barrel flavouring, which if you like is a representation of the Big Bang itself. The Big Bang was like a big explosion, so a very hot place with lots of energy, which was related to the smoked whiskey barrel. The mango was chosen because its colour reminds us of the colour of the Sun, which is made of plasma, as was the early universe.

We then get to the second layer, which was coconut Malibu – totally transparent, totally clear, just like the universe became clear about 380,000 years after the Big Bang. It went from a hot plasma, which was opaque to light, to transparent to light. This when the earliest light was emitted, which we can still measure today – it’s called the cosmic microwave background.

The last layer was coconut water with vanilla pods suspended in it, which represented the idea of stars now starting to form and clouding the universe with specks of light. It was very light and very fluffy, and very subtle to the mouth.

We also did a delicate parmesan tulle that was inspired by the distribution of dark matter in the universe, and we did multiverse canapés, which were different chocolates with fillings that represented different pockets of the multiverse. Each one was inspired by a different ratio of material, say dark matter, dark energy, or normal matter. 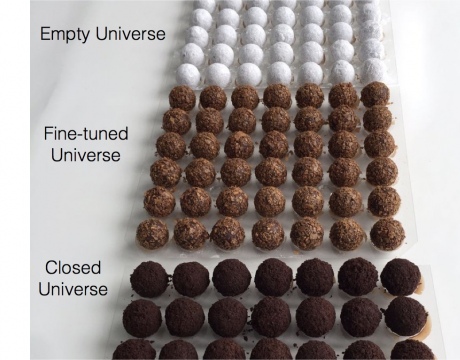 You recently had an event for the visually impaired. How was the experience redesigned for this audience?

We worked together with people from the Royal National Institute for the Blind, who helped us to modify it to be conducive to people with sight loss. At this point we have to give up any metaphors based on sight and relationships of colours and such.

We redesigned the cocktail in three separate parts, rather than being layered. The first one was put in a special container, based on a 3D model of the cosmic microwave background represented as bumps and grooves, originally designed by my colleague Dr Dave Clements in Physics. It worked well because we had the content of the first layer, which represented the hot beginnings of the Big Bang, and the outside was a tactile representation of the real data of that universe.

We redesigned some of the contents of the cocktails as well to work without the visual clues. We also redesigned the chocolates for them to have another layer on the outside, so when you hold them you can tell aspects of what was inside by the texture.

Our next phase is going to be more ambitious. We have shown so far that this is possible, engaging and fun, but the next stage will be a little different. What we want to do now is on a more abstract level.

We have identified five or six different concepts that are all-important in cosmology but are all-important in the kitchen as well. Those are things like gravity, energy, pressure, density, time, and so on. Those are physics concepts that chefs work with, and need to get right in order to get the recipe right; and equally, in cosmology, we have phenomena that push all these ideas to the extreme.

So, our next challenge now is to identify parallels between cosmological phenomena and what happens in the kitchen, and explain those parallels in the design of dishes. While maintaining the highest standards of quality, taste and surprise, we also symbolically embody some of the aspects of these physics concepts.

Why do we need new ways to engage the public with physics?

It’s important to find ways of demystifying cosmology and making it accessible, interesting and fun and generating enthusiasm and curiosity. I think food is the perfect medium for that because everyone has got a relationship with food – we all have an experience of it – and we can use that as a way to talk about something we do not have experience with. 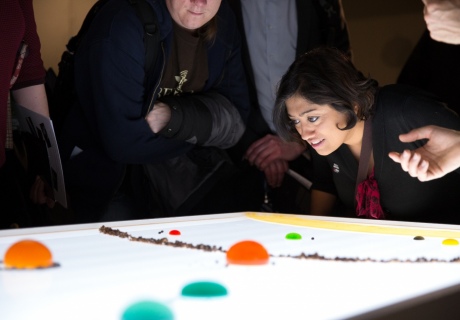 So far, in all we’ve done, we see ample evidence of that – people really engage, because if they can bite into it they start feeling like they can really grasp it. It’s no longer this big conceptual, intellectual and mathematical fearsome beast, it becomes something you can relate to, and I think it’s a useful tool to lower barriers to science.