The NTD community met in Geneva to celebrate the significant progress made since the signing of the London Declaration and the WHO's Roadmap on NTDs.

The NTD Summit was hosted by the WHO, Uniting to Combat NTDs and the NTD community between 19-22 April, and celebrated key achivements over the last five years, before technical discusssions took place to define a clear path towards the 2020 NTD goals and beyond. 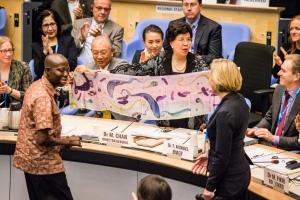 
With so much progress made through the leadership of the WHO Director-General, Dr Margaret Chan, she was rightly acklowledged for all her efforts in tackling NTDs. SCI’s Executive Director, Dr Wendy Harrison and Kofi Nyarko (a Head Teacher of a school for children with special needs in Ghana and a member of the ILEP board of people affected by Leprosy), presented her with an award for her achievements. 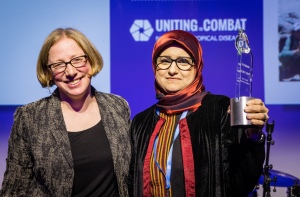 Dr Dhekra Annuzaili, SCI’s Programme Manager for Yemen and Sudan, was also acknowledged for her hard work. She received the “Exceptional Service Award”, as part of the Uniting to Combat NTDs celebration of “Women in Focus”. Despite the ongoing conflict and gender inequality in Yemen, Dhekra’s commitment to the Yemen National Schistosomiasis Control Programme has never wavered. 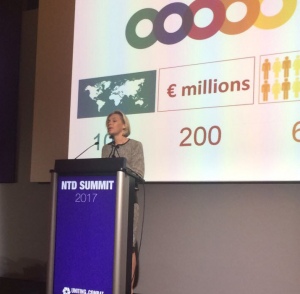 Dr Wendy Harrison, presenting the BEST framework on behalf of the NNN

Dr Wendy Harrison, is also the Chair of the Neglected Tropical Disease NGDO Network (NNN) for 2017. She presented the BEST framework (Behaviour, Environment, Social inclusion and equity, Treatment and care), which is a framework for action, and aims to gather the diverse cross-sectoral efforts needed to reach control, elimination and eradication targets for NTDs.

As part of her role, she lead the NNN session which explored some of the common issues that are important in  disease control programmes for a number of different diseases. Topics covered included how to most effectively integrate Water and Sanitiation into NTD programmes, how to make sure that the symptoms of NTDs are treated alongside treatment programmes and that investments in NTDs support the wider global development agenda set out by the UN Sustainable Development Goals. 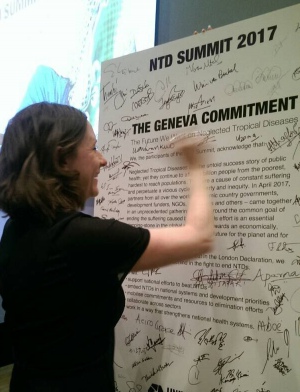 With all the fantastic progress achieved in the last five years, it was widely recognised that continued efforts would be essential in the global movement towards an economically, socially and environmentally sustainable future.  It was with this recognition that the NTD community, along with government and private industry partners, came together to make the commitment to keep the momentum going and bring an end to all NTDs.