Imperial research on cricket bat design is enshrined in law The Laws of Cricket have been improved thanks to a study carried out by researchers from Imperial College London.

The Laws of Cricket were established in 1787 by the Marylebone Cricket Club (MCC). The Laws ensure uniformity and fairness in cricket wherever it is played around the world. 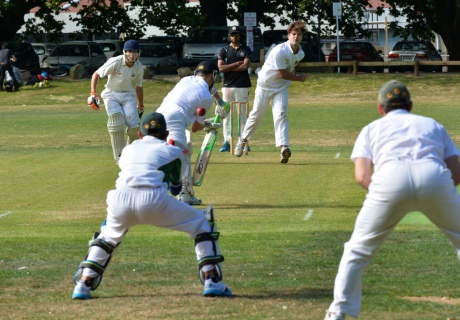 The Imperial researchers, co-led by Dr Chinmay Gupte, a senior lecturer from Department of Surgery & Cancer, and Professor Anthony Bull, Head of the Department of Bioengineering, were asked by MCC to assess cricket bat performance. Their work has helped to re-balance the game so that both the cricket bat and ball are treated equally in terms of the laws.

In 2016, the researchers carried out an assessment of bat designs and concluded that the bat had, over the years, evolved to such an extent that it gave batsmen a significant advantage over bowlers. They found that, while the mass of the bat had increased over the years, it was the shape of the bat that made the most difference to how far the ball travels after it has been hit.

Back when I was the Captain of Oxford University I would never have dreamed that I would be influencing the Laws of Cricket.

The team also found that the sweet spot (the prime part of the bat for hitting the ball) situated near the end has increased in size from 80mm in 1905, to 215mm by 2015. This optimised the bat so that a greater proportion of it could hit the ball harder, while minimising vibration, thereby improving the effectiveness of the bat.

They also found changes in the design of the bat made the edges thicker, meaning less energy was lost on impact when the ball was struck so that it could travel farther.

Following an assessment of the Imperial study, the MCC World Cricket Committee carried out consultations with players and manufacturers and recommended further bat size limitations. The new Law, which comes into force in October 2017, states that the maximum thickness of the edge of the bat needs to be less than 40mm and the overall depth of the bat cannot exceed 67mm.

Now in 2017, those recommendations have been enshrined in the Laws of Cricket. This means that sports manufacturers and cricket clubs across the world will be updated by MCC about the changes in the laws so that they can be implemented from October.

Dr Gupte is a senior Lecturer in Musculoskeletal Science and an Honorary Consultant Orthopaedic Surgeon in Trauma and Orthopaedics with a PhD in biomechanics. Dr Gupte said it was particularly gratifying to be able to play a part in improving the game, as previously he was a professional cricketer for Middlesex and Gloucester County Cricket clubs in the nineties. He was also the captain of the team for Oxford University in his student days.

Dr Gupte said: “Back when I was the Captain of Oxford University I would never have dreamed that I would be influencing the Laws of Cricket. It has been a privilege to help maintain the balance between bat and ball by contributing sound scientific research. We at Imperial hope that we can extend our cricket research to better prevention and treatment of serious injuries in cricketers.”

A brush with royalty

On 3 May 2017, Dr Gupte had the honour of presenting the team’s research to HRH Prince Philip, the Duke of Edinburgh, who was opening a new stand Lord’s, which is the home ground of MCC.

On his brush with royalty, Dr Gupte added: “The Duke of Edinburgh was fascinated by the changes in cricket bat design over the last 130 years. Being an enthusiast cricketer himself when he was younger it was an honour to present some of our work to him.”

This work is part of a wider collaboration between MCC and Imperial. Previously, the Imperial researchers have investigated how different cricket ball colours enable them to be more clearly seen in day/night matches.

The team also developed new methods for monitoring illegal bowling actions. A delivery is illegal if the ball is thrown rather than bowled. Imperial’s assessment involved analysing how the bowler’s elbow moves when delivering the ball to judge whether it has been bowled correctly.