Professor Austin Burt has been awarded a President's Medal for his work engaging the public in malaria-control projects across sub-Saharan Africa.

Now, more than ever, universities should be in and of the world. We cannot afford to retreat to ivory towers

The accolade is given out as part of the College’s annual President's Awards for Excellence in Societal Engagement. These awards celebrate staff, students and community partners who have gone the extra mile to bring the College’s work to the wider public. Awardees judged to have made particularly exceptional contributions are selected to receive the President’s Medal for Excellence in Societal Engagement.

Austin Burt, Professor of Evolutionary Genetics at Imperial, is Principal Investigator for Target Malaria. Target Malaria is an international not-for-profit research consortium that aims to develop ways to control the spread of malaria in sub-Saharan Africa. 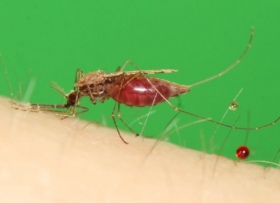 The project is researching the use of gene drive technology to reduce the population of malaria-carrying mosquitoes to low enough levels that they can no longer transmit the disease.

The technology has been hailed as “revolutionary” while being subject to much discussion. They hope to start trials in three African countries in the future, but not before extensive safety testing and engagement with local communities

Professor Burt has spearheaded efforts to promote dialogue with the public – enabling understanding of the project and facilitating open discussion between local people and the scientists behind it. This engagement has taken place at many levels: in the field in local villages, with national governments, and internationally with regulators, NGOs, the media and the wider public.

Professor Burt said: “Engaging with local communities affected by malaria is hugely important. They are ultimately our end users, and we need to know that the technology we’re developing and the projects we’re working on are acceptable to them. It is our responsibility to listen to their concerns, take their views into account, and try to answer any questions they have.”

“It is an honour to receive this award, but this is very much a team success and it is a testament to the hard work and dedication of my Target Malaria colleagues."

The Target Malaria team in Uganda

As well as the President’s Medal, this year award-winners were selected across five categories: the Achievement Award, the Collaboration Award, the Inspirational Partner Award, the Leadership Award, and the Student Award.

Beth Rice, a postgraduate student from the Department of Physics, has received the Student Award for her work establishing and running a Science Club for young girls in South London.

The Club, which is open to girls aged 6-11, is run through the Baytree Centre in Brixton -  an organisation that seeks to empower women and girls through education and skills development programmes. 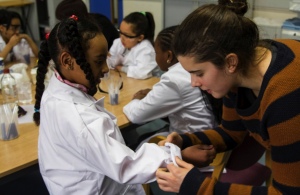 Beth said: “I was already volunteering at the Maths Club when I realised there wasn’t a programme for Science. I know that there doesn’t tend to be a lot of hands-on or practical science lessons at primary schools, so I really wanted to set one up. We run fun activities to help the children think scientifically, develop curiosity, and encourage an interest in science.”

“Doing a PhD means you can easily get bogged down in the details of your specific field. Running the Science Club has kept me in the real world – I have to think in a very abstract way to turn complex scientific concepts into something young children will understand and find interesting. It’s really fun, and great to have a completely different challenge to focus on away from my research”

The selection panel for the awards was overseen by Professor Maggie Dallman, Associate Provost (Academic Partnerships). The award recipients will receive their awards from Imperial’s President, Professor Alice Gast, at an event in June.

Professor Maggie Dallman said: “The winners of these awards represent Imperial at its best. Their efforts to inspire, inform, and engage the public are thoroughly deserving of this recognition. This matters. Every day we all face questions and decisions that hinge on an understanding of the increasingly complex world around us. Now, more than ever, universities should be in and of the world. We must not try and indeed cannot afford to retreat to ivory towers.”

Professor Alice Gast, President of Imperial,said: “Congratulations to all of this year’s winners. These awards recognise the vital contributions they have made to make our university world-class in teaching, research and public engagement.

“Our College strategy recognises the importance of our collective strength across everything we do. Celebrating our excellent staff and students is a key part of this. Their efforts matter greatly to us and we thank them for all that they do.”

2017 President's Awards for Excellence in Societal Engagement: winners and commendations

The President’s Medal for Excellence in Societal Engagement