To be or not to be an academic: the question for all postdocs Becoming a full time academic at a research university is a dream for many young scientists, but it's not an easy road.

For the past eight years, Dr Liz Elvidge has been helping postdoctoral researchers achieve this goal − but also advising them about a variety of different career paths and generally supporting their decision-making and skill-set building.

Liz is Head of the Postdoc Development Centre at Imperial, and has recently written a book What Every Postdoc Needs to Know, in collaboration with two colleagues. The emphatic title reflects Liz’s straightforward approach and draws on her many years of experience as well as her own spell as a postdoc.

A postdoctoral research position comes after a PhD doctorate degree. It is a fixed-term contract, typically funded through a grant awarded to a Principal Investigator of a research project. After completing a postdoctoral position, researchers can apply for a fellowship which provides funding directly to them and their research: Imperial has its own fellowship scheme, while there are similar schemes run by the Royal Society, Research Councils UK, and charities such as Wellcome. A successful fellowship will put a researcher in a good position to apply for long-term faculty positions, such as a lectureship.

The catch is that only 10% of postdocs nationally go onto to permanent academic positions (the figure is slightly higher for Imperial postdocs). What’s more, research conducted by the PDC shows that the longer people stay in postdoctoral positions, the more they want to become academics – yet the less likely that becomes as time goes by. In fact, four years seems to be a ‘breakpoint’ for postdocs, after which time the academic door effectively closes, as others come through with fellowships.

“There’s a real challenge in dealing with a population where 90% will ultimately be disappointed and in some cases believe that they are a failures at something they have been doing for so long,” Liz says.

“The biggest take home message from the book is that being a postdoc is not a long-term career. You can’t be a postdoc for the rest of your life. Postdocs need to know that and take responsibility for their career.”

Liz stresses though that careers outside of academia – such as in industry, publishing and research administration – should not viewed as ‘alternative’ or lesser, but rather that they are all equally valid paths.

The PDC at Imperial aims to support postdocs whatever path they ultimately choose with a variety of initiatives, including one-to-one advisory sessions; pop-up briefings following a new announcement or funding stream; leadership courses; residential away days and much more.

Perhaps one of the most successful initiatives has been the mock interview scheme. Any postdoc can ask for an interview for any prospective job. Liz’s team analyses the application and puts together a set of tailored interview questions − chaired by a member of PDC staff, with postdocs making up the two or three panellists. These are drawn from a pool of postdoc volunteers – who also benefit themselves by seeing the required standard to be shortlisted and the interview process.

“We give them a hard time – there’s no point otherwise – but also lots of constructive feedback,” Liz says. “Around 50% of postdocs land the job following a mock interview. That’s substantially higher than success rate than without one.

“Candidates often come back surprised and say ‘the questions were virtually the same as the mock interview − how can that be?’ Well, the answer is that we’ve been doing this a long time and we’ve got a database of questions.” 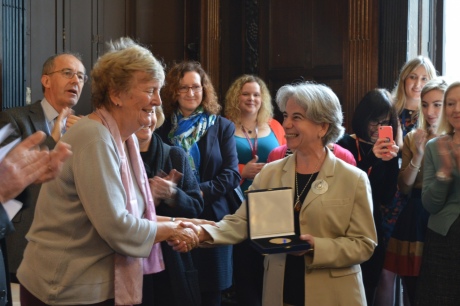 Going forward, the PDC is spearheading some new schemes, such as Pathways for Postdocs – an online resource portal that collates existing material that postdocs find useful in easy to digest skill-based tip sheets. The PDC will also be launching a new shadowing scheme, allowing postdocs to shadow staff who have studied for a PhD or postdoc, but gone into a different professional role. Initially that will involve shadowing Imperial staff for example in the research office or other administrative roles, but it could be rolled out to external companies, perhaps drawing on the pool of former Imperial postdocs now working in industry.

For several years the PDC has administered a network of postdoc reps – regular postdocs who represent their department, campus or larger group and raise the concerns of their peers and also inform them about future opportunities. Now the PDC is seeding a network of academic champions in each department, often full Professors, who can make sure that the issues of postdocs are well represented at a more senior level, for example regarding training. Every postdoc at Imperial is contractually permitted to undertake upto 10 days training allowance per year – something quite unique in the sector.

“If the Principal Investigators protest and say: ‘I really don’t think my postdoc can be doing that,’ we need someone to say: ‘actually, you don’t make that choice’.”

The PDC also recently commissioned some research looking at the barriers faced by female postdocs as well as black, Asian and minority ethnic (BAME) postdocs, when applying for fellowships. Liz is currently reviewing the results with Professor Nick Jennings, Vice Provost (Research) and planning a course of action.

While writing the latest book has been something of a labour of love for Liz, she’s already thinking about a follow-up with the working title What every new academic needs to know. She notes that while fellowship recipients, probationary lecturers and lecturers are all on a more solid footing than postdocs, they are still shaping the future direction of their careers and deciding what sort of academic they want to become.

“There’s days when you only write a few words and they are all terrible, but I really enjoyed it and I think we’ve got more to say.”