Imperial explores the tech that will shape our future Professor Alessandra Russo kicked off the event at City Hall

Imperial assembled academics, industry experts and business leaders to explore how tech innovations will transform the way we live, work and play.

The annual Tech Foresight showcase, organised by Imperial Business Partners, looked to 2037 to consider how advances in computing, AI, and machine learning could revolutionise business and society over the next two decades. 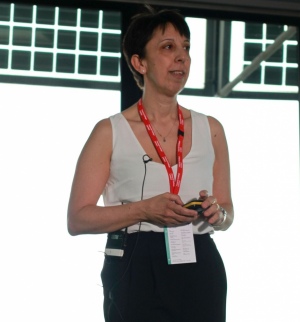 Professor Alessandra Russo, from Imperial’s Department of Computing, kicked off the event at London’s City Hall by sharing her insights into advances in machine learning.

A truly intelligent machine should be able to communicate with people in natural language like a human would, she said.  It also must be able to learn from its experiences and interactions, and explain to a human why its decisions have been made.

Robots need to be able to learn from mistakes they make, and turn this into data which allow them to continue to learn, she said.

Dr Stefan Leutenegger, from the Department of Computing, spoke about his research into robot mobility – such as drones, medical microrobots, and driverless cars.

“We want robots to be complimentary to what we do - to solve tasks that are dangerous for us, difficult, or just simply boring,” he said.

In general, people expect robots to become more human-like, he said, imagining them moving around the house and washing up, or doing the laundry like humans do.

“In many circumstances, I think it’s more likely to have smarter home devices, than robots moving around the home to do these tasks. For example, a smart cupboard that can clean, dry, and hang clothes, or a bed that can make itself” said Dr Leutenegger.

However there are a lot of tasks that do require mobility. Building these kinds of robots is very complicated, he explained.

“Asking a robot to get you a beer from the fridge, for instance, requires it to understand what a fridge is, where the fridge is located in relation to itself, how to get there safely, what a beer looks like, and how to get it out of the fridge”.

In twenty years, he said that it could be possible to build robots that could care for children or the elderly, but doubts whether that would be desirable. “I think autonomous drone ambulances are a more likely prospect” he said. 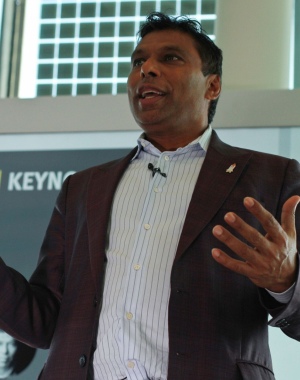 In the evening Naveen Jain, Founder and Executive Chairman of Moon Express – the first private company in history to receive government permission to travel beyond Earth's orbit – joined the event to deliver the keynote speech.

“We are living in one of the most innovative decades in human history. There has never a better time to be an entrepreneur than today” he said.

Speaking of the importance of entrepreneurs and innovators in finding solutions to the world’s greatest challenges, he said: “I believe the superpowers of tomorrow are not going to be nation states. They will be entrepreneurs”. Entrepreneurs are now tackling problems that were previously left to governments to solve – such as space exploration and healthcare challenges, he added.

Offering advice to entrepreneurs, he said: “Come up with a goal so audacious, that when you tell people what you’re doing they tell you you’re crazy. As an entrepreneur you only fail when you give up. Every idea that doesn’t work is just a stepping stone to a bigger idea and a better success” 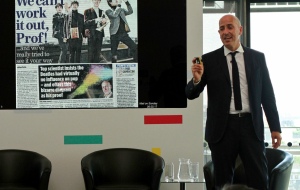 Professor Armand Leroi, who heads up the Social and Cultural Analytics lab at Imperial’s Data Science Institute, took to the stage to discuss whether you can measure innovation. He explained how his research used computer algorithms to analyse singles recorded by every major band between 1960 and 2010 to see how they deviated from the musical norm.

It threw up some interesting results. He ran into a “bit of trouble” with Beatles fans, he explained, after his research revealed that they didn’t have a significant impact on pop music. “We measured them and found that they were actually really, really average,” he said, claiming that The Kinks, The Who and The Rolling Stones had a much greater influence according to the algorithm.

As part of Imperial College London, Imperial Tech Foresight brings together world-leading academics and business leaders to offer challenging, provocative and personal visions of the future.

Each year Tech Foresight and the Imperial Business Partners corporate membership programme jointly host an annual showcase event to look forward 20 years to explore the future of science and technology in areas such as computing, robotics and energy networks. City AM: Britons believe driverless future is on the way to our cities