The monitoring program is designed to monitor the populations of different bat species in the Park as a way to gauge the health of the local environment.

This is the first wild sound-recognition project run on this scale. The technology allows rapid results, which hopefully will provide useful insights into the bat population of the park.

Bats are a good indicator species, so are often used to measure how healthy our environment is. By detecting bat ultrasonic calls, the monitors will track species present and their activity levels and display the information to the public. This will provide an insight into the wildlife health of the park over the next year, and help to inform its management.

The detectors for monitoring calls have been developed and installed by UCL and Intel scientists in collaboration with Arup, the Bat Conservation Trust, and the London Wildlife Trust. Scientists from Imperial College London helped to design some of the underlying artificial intelligence that recognises different bat species’ calls.

“We are trialling a network of smart bat monitors that listen to the environment, and figure out what species are present, all in real time. It’s a ‘Shazam’ for bats!

“It’s a huge step forward for detection technology - an Internet of Wild Things, and we hope it will help understand how wildlife is being impacted by rapid environmental change,” said Professor Kate Jones, project lead and Chair of Ecology and Biodiversity at UCL.

Most bats fly and hunt insects at night, when they rely on sound rather than sight. They emit high-pitched sounds that are normally above the range of human hearing, using the reflected sounds that bounce off objects to navigate. This works in a similar way to sonar, and is called echolocation.

Each bat monitor uses an ultrasonic microphone to capture audio in its surroundings up to the high frequencies of common British bat species. The captured sound is then analysed by an artificial intelligence program that has been trained to recognise bat calls by their distinctive signature and assign each call to a particular bat species. The noctule is the UK's biggest bat, but it's still smaller than the palm of your hand. Photo: Martin Celuch

The program, developed by scientists from Imperial, UCL and the University of Warwick, was built using a large database of bat calls and species identifications from Mexico. Mexico has a large and diverse bat population, with many of the same species as Europe.

The team used a form of artificial intelligence called machine learning, which used the database to recognise patterns in bat calls that were distinctive for each species.

Professor Mark Girolami, from the Department of Mathematics at Imperial, said: “This is the first wild sound-recognition project run on this scale. The technology allows rapid results, which hopefully will provide useful insights into the bat population of the park.

“It’s been an enormous undertaking, from the initial idea of using bat calls as a way to monitor species, through the collection of data and machine learning process, to creating the sensors and working with the park to install them.”

The installation of detectors at 15 sites across QEOP began in late May, once the bats came out of hibernation. The detectors are connected to Wi-Fi and a power supply to enable them to record data and give reliable results quickly. They will be covering a large area and will be constantly recording over a long period of time.

The team hope to tackle questions about those bats that call only quietly, are very difficult to tell apart acoustically or that are not likely to be encountered on a site with artificial light, of which many species are shy. 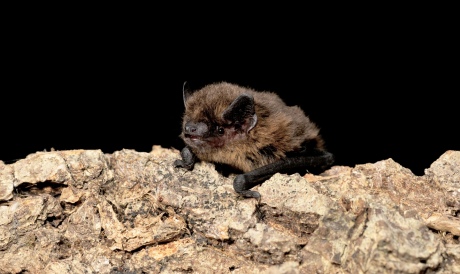 Pipistrelles are the commonest British bats, weighing around 5 grams (same as a 20p piece). A single pipistrelle can eat 3,000 tiny insects in just one night. Photo: Hugh Clark

At least eight species of bats live in London, from Britain’s smallest bat, the common pipistrelle, to the country’s largest, the noctule.

Live data from the bat sensors can be viewed on the project website. The bat sensor trial will run on QEOP until the end of the year when the bats go back into hibernation, and findings on what has been learned about bat biodiversity at the park will be available towards the end of 2017.