New Imperial partnership to support innovation in Hammersmith and Fulham Imperial has partnered with the London Borough of Hammersmith and Fulham to support economic growth, enterprise and innovation in the area.

The partnership forms part of the Council’s broader Industrial Strategy,  Economic Growth for Everyone, launched last week, which aims to position the borough as the best place to do business in Europe. 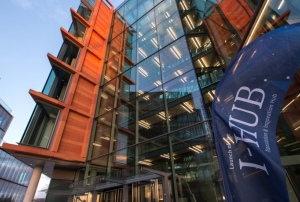 Imperial and Hammersmith and Fulham will work together to support the development of a world-class innovation ecosystem, fuelled by close collaboration between academics, businesses, entrepreneurs and the local community.

The Council launched its Industrial Strategy at Imperial’s Translation and Innovation Hub (I-HUB), based at the White City Campus. Providing more than 185,000 square foot of new laboratory, incubator, accelerator and office space, the I-HUB will enable the co-location of start-ups, entrepreneurs, and major corporations alongside Imperial’s academic community.

The event featured a tech showcase, to give a taste of the businesses and start-ups flourishing in the borough. These included Polymateria, based in Imperial’s Incubator, who develop additives for plastic products and packaging that allow the them to biodegrade over time. Their lead scientist, Dr Graham Chapman, received his PhD from Imperial.

Speaking at the event, Professor Alice Gast, President of Imperial College London, said: “We are making a very long term commitment to our White City Campus which will evolve over decades.  It is here that we are creating a new model for the modern university campus. We will be open to our community, outwardly focused, innovative and collaborative and we will be agile and flexible. We are making a campus with embedded corporate, academic and community partners.  Here companies, academics and the local community will coexist more closely than ever before.

“Through our Partnership for Growth and Innovation with the Council we can support local enterprise and continue to attract dynamic STEM companies to the area.  We have the infrastructure already at our White City Campus to offer them a place to thrive and advance their businesses alongside our world-leading researchers.” 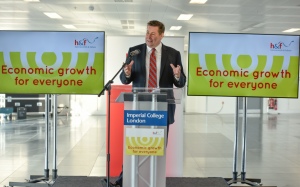 Introducing it, the Leader of the Council, Stephen Cowan, said: “This is an ambitious strategy to ensure that Hammersmith and Fulham is the best place to do business in Europe - and to live and work.

“From our innovation partnership with Imperial to our major investment in local skills and regeneration, we are determined to future-proof our economy”

At the event, he explained that the borough aims to mirror the rise of Cambridge, Massachusetts and Stamford, California as major centres for new and innovative tech.

“The single best strategic advantage we have in the borough is Imperial College London. It is second to none when it comes to engineering, science, biotech and innovation” he said.

Professor David Gann, Vice President (Innovation) at Imperial said: “It is wonderful to be part of this strategy. At White City we’ve got a wonderful set of facilities that we hope to enliven with new ideas and purpose. This building, with its labs and incubator spaces, will allow us to create the future.”