Imperial has conferred an honorary doctorate on Stephen Hawking, the world renowned scientist.

The honour was given at a special ceremony at the Royal Society on Monday 17 July, which celebrated the remarkable contributions Professor Hawking has made to physics and cosmology over his 50-year career.

Imperial has changed the way we think about the universe. 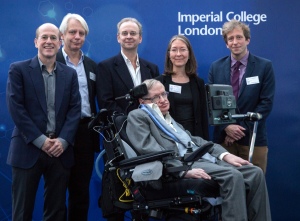 Stephen Hawking and his former students, pictured in October 2016

Professor Hawking has written more than 250 publications, ranging from scientific papers to bestselling books. One of his most popular early works, A Brief History of Time, has now sold 20 million copies worldwide.

His studies have earned him a host of honours and prizes, including being named Companion of Honour to Queen Elizabeth II, member of the Pontifical Academy of Sciences, holder of The Copley Medal, the Albert Einstein Medal, the Eddington Medal, the Presidential Medal of Freedom, the BVVA Fundamental Physics Prize, and the Honorary Freeman of the City of London. 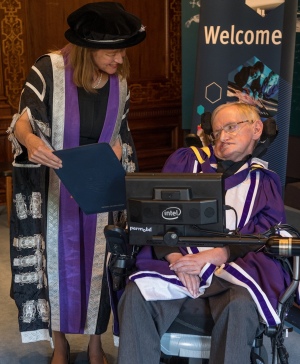 At Cambridge University, Professor Hawking holds the Stephen W. Hawking chair of cosmology, is the Founder of the Centre for Theoretical Cosmology, and the Dennis Stanton Avery and Sally Tsui Wong-Avery Director of Research. For 20 years he was the Lucasian Professor of Mathematics, the position once held by Sir Isaac Newton.

Speaking at the ceremony, Imperial’s Dean of Natural Sciences Professor Tom Welton said: “Professor Hawking’s scientific work has given the world a new understanding of black holes and the origins of the universe.

“With Roger Penrose he showed how Einstein’s General Theory of Relativity implied that space and time would have their beginning in the Big Bang and an end in black holes. This work revealed that black holes and the early universe were the key theoretical laboratories for probing physical law at ever deeper levels. In 1975 Professor Hawking made the profound discovery that quantum theory implied that black holes had a temperature and radiate.

“For the past 40 years this work has been considered to be the single most important step in our quest for obtaining a full theory of quantum gravity, unifying General Relativity with quantum theory.”

“The high regard we have for Professor Hawking and the widely felt appreciation of his contributions to science and society are demonstrated in all corners of the world. Through his popular science books Professor Hawking has enlightened and inspired readers of all ages and all interests. 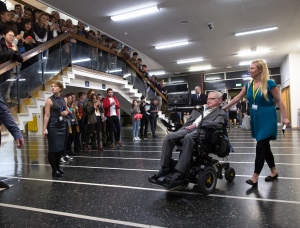 Professor Hawking at Imperial ahead of his lecture in October 2016

“Our theoretical physics group conducts world leading research in some of the most exciting areas of theoretical physics, including string theory, quantum field theory, cosmology, quantum foundations, and gravity. Professor Hawking, and Imperial and Cambridge, have developed collaborations advancing physics in profound ways.”

Sir Philip Dilley, Chair of Imperial’s Council, said: “Honorary degrees show Imperial College’s appreciation for people who have made remarkable contributions to our disciplines of science, engineering, medicine or business. They are given to leaders from across the world who inspire our work by advancing knowledge and benefitting society through their discoveries. Professor Hawking is most certainly an exceptional individual and fully deserving of this highest accolade.”