The gauntlets from a suit of armour - the left one was analysed. Image: Trustees of the Wallace Collection

Imperial researchers have tested a 'blued' gauntlet from a 16th-century suit of armour with a method usually used to study solar panels.

Metalworkers have used various techniques to prevent steel from rusting, some of which turn the metal black-blue. This ‘blueing’ effect can be created in several different ways, including by applying heat or (in later years) chemicals.

However, it can be difficult to know which method was used in older metalwork like armour or weapons, because the blueing is oxidised over time, and because many armourers kept their methods protected as trade secrets.

When conservators from The Wallace Collection discovered some blueing preserved beneath the overlapping finger plates of a 16th Century gauntlet, they decided to investigate.

Previously, they had teamed up with Dr Alex Mellor, from the Department of Physics at Imperial College London, to investigate the blueing of a sword blade from 1803, so they knew the method might work. But the gauntlet was a much trickier subject, thanks to its complex shape and the very small area of the surviving blued surface. 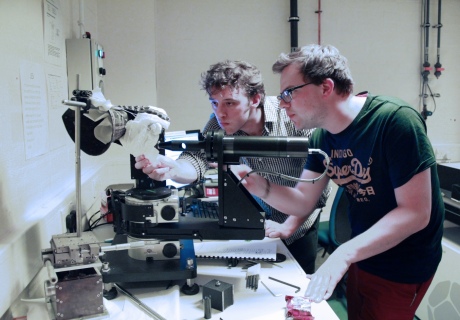 The method used is called spectroscopic ellipsometry, and involves studying the reflections of light from the surface of a material. A monochromatic light beam is bounced off the material, and then analysed to see what changes occurred to the beam.

“Usually, we use spectroscopic ellipsometry in our lab to look at the effect of different films applied to the surface of solar panels. If a film can help panels reflect fewer wavelengths of light, then more light, and more energy, can be collected.

“In this case, we were looking for the effect on the light that the thin film of blue produces. By comparing the signature from this experiment to those where the production method is known – such as 19th century guns, or sample strips of metal – we can determine how the gauntlet was blued.”

The best and the smartest

After several hours of careful placement and testing, the team were able to get some results from the blued surface of the gauntlet. From their preliminary results, it looks like the bluing is solely the result of heating to around 250°C.

If, when the data has all been carefully processed, this turns out to be the case, then it would fit with the conservators’ ideas of how the gauntlet was originally decorated.

Wallace Collection Consultant Archaeometallurgist Dr Alan Williams explained: “We think the blueing process could be associated with the intricate gilding on the gauntlet.

"Gilding involves chemical etching, followed by application of layers of copper and a gold-mercury amalgam, which when heated fixes the gold to the surface whilst removing the toxic mercury.

“It’s during this heating that the bluing could have occurred – coming as a happy side-effect of gilding. For the best quality armour, heat treatment was also a method of hardening the metal; thus heat treatment could produce both the best steel, whilst simultaneously creating a very rich decorative appearance.” 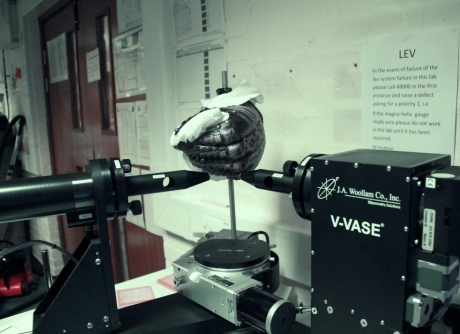 The gauntlet in the ellipsometer

The physicists and conservators met in the curious surroundings of Chessington World of Adventures – at an ellipsometry workshop. Dr Williams was hunting around for possible new techniques that could be applied to metallurgical questions, and got talking to Dr Mellor.

Now that their second collaboration seems to have been a success, both teams hope to work together again, in what is a valuable exercise for both. As Dr Mellor said: “It’s a good use of our equipment as a public asset. The Wallace Collection is a national resource, and we’re pleased to be able to help unravel some of its mysteries.”

David Edge, Armourer and Head of Conservation at the Wallace Collection, agreed: “The importance of science in the study of historic artifacts like arms and armour cannot be understated, hence the enormous value of collaborative scientific projects like this." 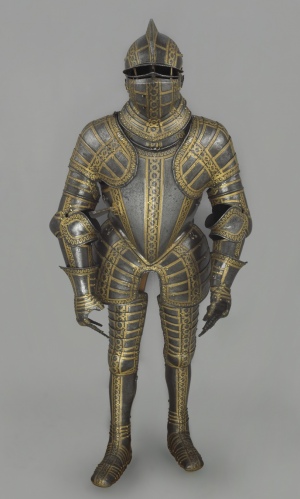 The whole suit of armour. Image: Trustees of the Wallace Collection

Mr Edge then explained the origins of the gauntlet:

"The full set of armour that this gauntlet comes from (cat. no. A62) was made for Lord Buckhurst in 1587 at the Royal Armourers’ Workshops in Greenwich - originally set up by Henry VIII at the beginning of the 16th century to provide himself and his Court with the finest quality armour.

"It was almost certainly ordered by Lord Buckhurst with the imminent arrival of the Spanish Armada in mind, the following year. Queen Elizabeth had placed Lord Buckhurst in command of troops along the south coast and he would have wanted a suitably impressive armour to lead them into battle against the Spanish invaders, who everyone was expecting would actually land rather than be defeated at sea.

“It was very definitely made as an armour for war, not ‘parade’, despite its rich appearance!”