A taste of EEE Detecting cancer, the secrets of an Oyster card, managing epilepsy, programming integrated circuits, and much more.

We showed our Y12 summer school students that electrical and electronic engineering goes far beyond generating electricity and soldering.

Over the summer the Department contributed to two summer schools for Y12 students.

We started in July with a week-long Work Experience course for 12 students.  During their time here they spent a morning interviewing academics and researchers to discover more about their work, how it is funded and how they let people know the results.  There were lectures on a range of subjects including medical imaging to detect and prevent cholangiocarcinoma (a cancer caused by liver flukes), mechatronic suspension of road vehicles, and the development of a bio-inspired artificial pancreas.  The students were particularly captivated by a lecture from Dr Papavassilou on how to spot fake physics ii news stories, especially those promising free energy or cancer cures. 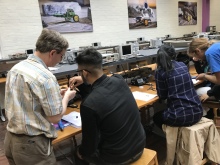 Students were challenged to think like an engineer and problem solve and innovate during an Internet of Things activity where the students designed and built remote control cars.  They experienced practical electronics by building a decision maker.

At the end of the week they joined with students from the Life Sciences, Materials, Mechanical Engineering, National Heart and Lung Institute, and Physics streams for presentations and a poster display.

The Sutton Trust summer school followed a similar pattern to the Work Experience course.  A half-day visit to a research group led to one group being fascinated to hear  how Professor Pike and his team are designing microseismometers which will go to Mars.  There were lectures on a range of topics including microchips and the brain, FPGA computing, and an introduction to energy.  The students assisted PhD student Jonathan Zheng in designing a simple Space Invaders-type shooting game using Unity.   The students built decision makers and gained hands-on experience of soldering.  The decision makers are small devices with four LED lights and four answers: yes, no, maybe, try again.  The questioner places their fingers on two pins that  sense skin resistance which changes the pitch of a buzzer and activates LED lights.  The decision maker is programmed so that the answer to a question is entirely random.

This was followed by a lively poster session on Friday full of students who were very eager to talk about what they had been doing during the week.

The Department thoroughly enjoyed hosting two enthusiastic groups of students and showing them the variety of things that electrical engineers do.

Many thanks to all the members of the Department who contributed their time, and to Dr Rebecca Holloway and her colleagues in Outreach for organising the summer schools.