The Lee Kong Chian School of Medicine (LKCMedicine) at NTU was first announced seven years ago by Prime Minister Lee Hsien Loong, and admitted its first 54 students in 2013. The state-of-the-art dual campus, in Health City Novena and at NTU, was completed this year.

Singapore, Imperial College and the world are benefiting from the creation of LKCMedicine.

LKCMedicine now admits 120 students per year – the fifth cohort joined this month – with the first set of fully qualified doctors due to graduate, with a joint degree from NTU and Imperial, in May 2018.

The School’s bespoke programme builds on Imperial’s world-renowned medical curriculum as it trains the next generation of Singaporean doctors. The innovative LKCMedicine curriculum takes a care-centred approach, harnessing team-based learning and the latest digital technology.

As the LKCMedicine programme developed, it has influenced Imperial’s own medical curriculum, and Imperial and LKCMedicine students now take part in an annual exchange. 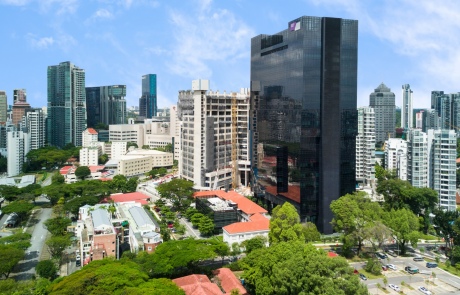 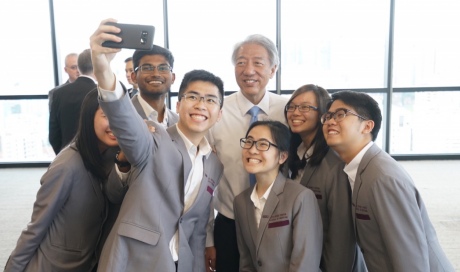 Singapore’s Deputy Prime Minister Teo Chee Hean said: “When we were looking for a partner to help develop a medical school in NTU, Imperial College was a natural partner. Imperial has an illustrious history in science and technology. In its formative years, NTU took reference from Imperial, and the two institutions have developed a long and fruitful relationship. Imperial College has successfully brought a medical school into its fold, demonstrating the important synergies that a combination of Science, Technology and Medicine can bring. We are thus delighted to have Imperial College as partners in the Lee Kong Chian School of Medicine.” 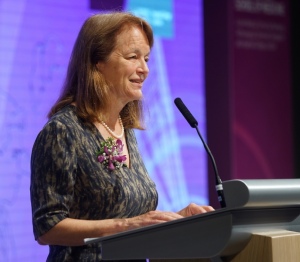 Professor Alice Gast, President of Imperial College London, said: “Singapore, Imperial College and the world are benefiting from the creation of LKCMedicine. Partnership between great universities like Imperial and NTU reap benefits for everyone.  We attract brilliant students and outstanding staff and we are advancing medical education. Imperial’s history and expertise in medicine guided the development of the LKCMedicine curriculum. This involvement has helped Imperial’s academics to rethink our own approach to medical education. Our collaboration has generated innovative teaching tools, technologies and approaches that provide a rich source of improvements to medical education in Singapore, the UK and beyond.”

Mark Field MP, Foreign Office Minister for Asia and the Pacific, said: “This groundbreaking medical school is the product of a highly successful partnership between two of our countries’ top universities – NTU and Imperial College London. In realising their vision for this school they have each drawn on their unique strengths to create a truly joint enterprise, and one which will bring untold benefits to healthcare here in Singapore. This is what makes international collaboration so exciting and worthwhile.” 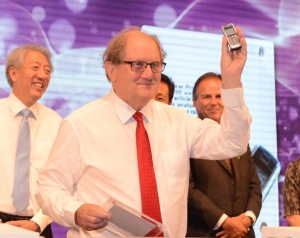 NTU President and Imperial Fellow Professor Bertil Andersson said: “The trademark of any successful joint programme is that the whole is greater than the sum of its parts; and today, we have a unique medical school that we can be truly proud of. By combining our strengths, NTU and Imperial have created an innovative and modern curriculum that incorporates the flipped classroom and team-based learning with simulation and apprenticeships, delivered in state-of-the-art facilities here in Novena and at the main Jurong West campus.”

The integrated teaching, research and care operations in Novena exposes LKCMedicine students to a wide range of care situations, from outpatient hospital clinics to inpatient, nursing home and hospice care. 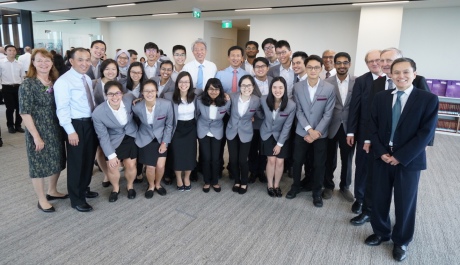 Second year student Nadia Nasuha binte Mohammad Nazri said: "As a medical student, I feel privileged to study here. Being surrounded by the different healthcare facilities in Novena is a constant reminder that I am part of something bigger than myself. This is further reinforced when I hear the occasional ambulance siren, reminding me of my purpose here. I am inspired by the quality care that is being delivered and this motivates me to study harder for the benefit of my future patients."

Professor Gast spoke of the benefits of the School’s student exchange programme: “These visits provide intrepid medical students from each school a chance to see first-hand the similarities and differences in medical education and healthcare in Singapore and the UK."

LKCMedicine Executive Vice Dean Professor Lionel Lee said: “We wanted to be very clear that even in a modern medical school, the basics of the art and science of medicine, coupled with a sense of humility and humanity, still form an integral part.”

The School's growing research faculty are impacting on care through their contributions to understanding of fundamental processes that underlie many common diseases, building on Imperial and NTU’s wider research ties. These include Nobel laureate and Nanyang Visiting Professor Barry Marshall, who discovered the stomach cancer-causing bacteria Helicobacter pylori, and Imperial’s Professor of Cardiovascular Epidemiology John Chambers, who is collaborating with Singaporean clinicians to study DNA methylation to improve diabetes treatment. 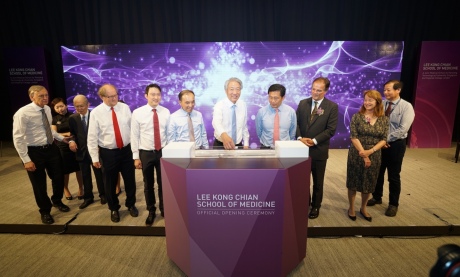 LKCMedicine Dean Professor James Best said: “We have attracted both renowned and highly experienced Faculty members, as well as talented young Principal Investigators who relish the challenges and opportunities offered by a new medical school. Our interdisciplinary approach is bearing fruit in areas that include diabetes, mental health and infectious diseases as we deliver impactful research in clinical, population and global settings.”

Reflecting on the drivers of LKCMedicine’s development, Lim Chuan Poh, Chairman of the LKCMedicine Governing Board, said: “In all that the School was working on, we were guided by a challenge posed to us by then-Minister of Education Dr Ng Eng Hen. He wanted us to infuse a new DNA into medical education and to aspire to be a School that even Imperial would be envious of.”

During the event, leaders from both universities, the Lee Foundation (a key funder of LKCMedicine) and the UK and Singaporean governments placed items in a time capsule to be sealed for 50 years. These items included a stethoscope, ultrasound probe - LKCMedicine was the first medical school in Singapore to use ultrasound to teach ‘live’ anatomy and physiology - Nokia phone with an SMS confirming support for the School from the Ministry of Education, and a copy of Imperial’s Reporter featuring LKCMedicine. 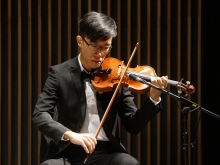 Among the current and former Imperial staff acknowledged by Professor Gast during the ceremony were: Professor Steve Smith, founding Dean of LKCMedicine and his successor Professor Dermot Kelleher.

Professor Naomi Low-Beer, who initially served as Imperial’s Curriculum Development Lead and has spent the past three years as LKCMedicine’s Vice Dean (Education) was praised by President Gast: "We are very proud of the excellent curriculum and exciting programme that Naomi developed.”

President Gast also paid tribute to Professor Martyn Partridge “who worked tirelessly and successfully with colleagues in Singapore and London to recruit key faculty and administrative staff,” and Professor Des Johnston who, along with Imperial’s Provost James Stirling, leads the collaboration for Imperial. 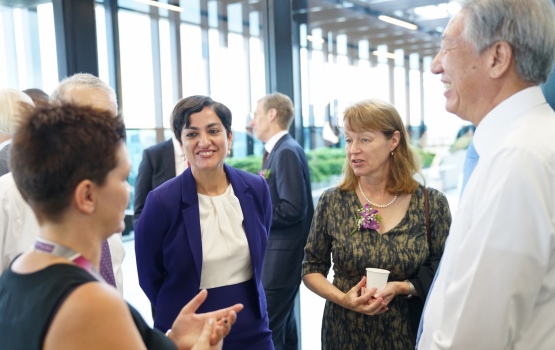 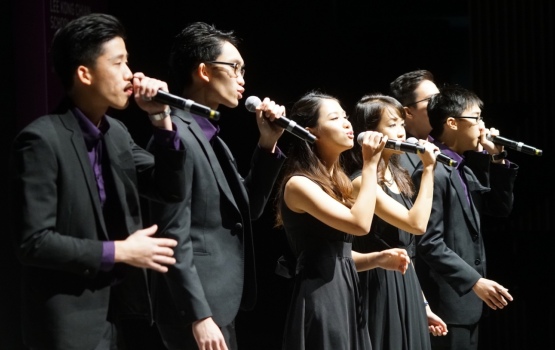 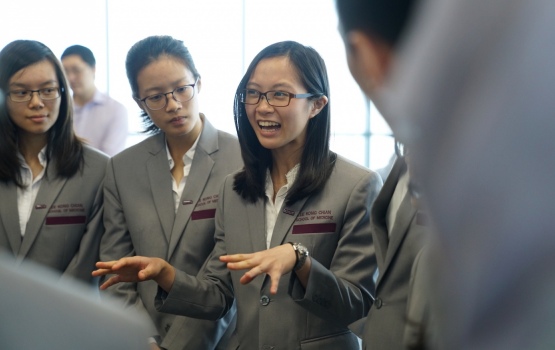 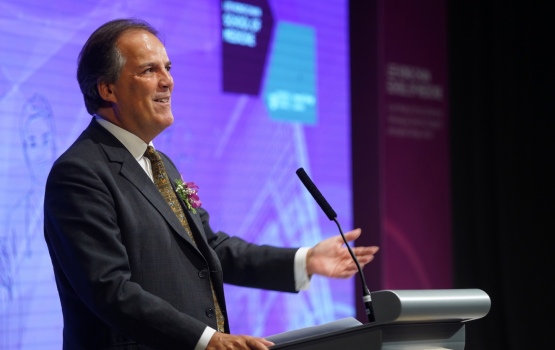 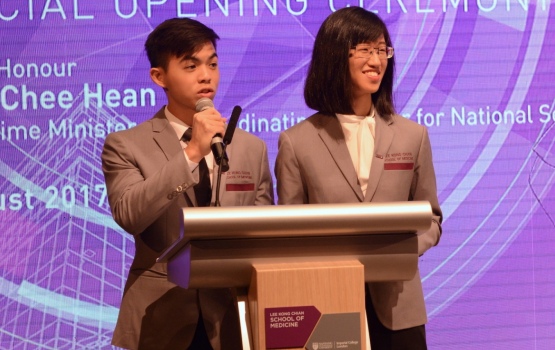