Larger predators are able to thrive in geothermally heated streams due to increased nutrient supply in warmer temperatures.

It is immensely satisfying when you finish processing the samples and start piecing together the story in the data.

Researchers, led by a team from Imperial College London, have been developing a study into the effects of higher temperatures on the ecosystem of geothermally heated streams in Iceland. Larger predatory organisms, such as brown trout, were predicted to be adversely hit by higher temperatures. A paper published last year, however, showed that brown trout actually thrived in ecosystems with a temperature well beyond their normal thermal limits, indicating their adaptability to the effects of global warming.

The team’s recent results, published in Nature Climate Change, challenge the generally accepted assumption that nutrient supply remains constant as the temperature increases. In fact, the paper shows that a key factor in the adaptability of larger organisms to higher temperatures is the increasing supply of nutrients in the warmer streams of the study system. Lead author, Dr Eoin O’Gorman, from Imperial’s Department of Life Sciences, shares his experience of the field trip, and discusses how these studies can improve our understanding of the effects of global warming. 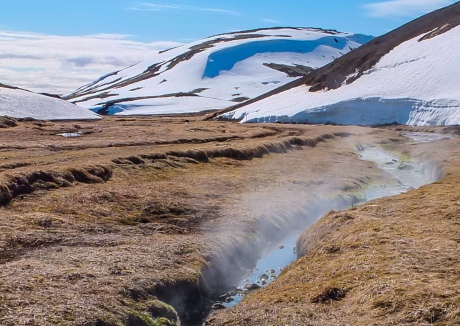 As part of your study you developed a bioenergetic model; tell us a bit about what was involved in this.

A bioenergetic model is a mathematical model that uses biological parameters such as nutrient supply, growth rate, consumption, and energy demand to estimate the change in biomass through time of algae, insects, and fish. We found the optimum values of all the parameters in the model that best fitted our Icelandic stream data. Then we could alter each of the parameters to see how they would change the patterns in our data.

What did the results show?

Energy demands of organisms are higher at warmer temperatures and larger organisms struggle to find enough food to meet their requirements. This means that we typically get fewer large things and more small things as environmental temperature increases, all else being equal. However, if there are more nutrients entering the system at warmer temperatures, then algal resources and the insects that eat them can get replenished almost as quickly as they are consumed, which allows the larger organisms, such as fish, to survive. We found that changing the temperature dependence of nutrient supply in our model could flip the relationship between body size and temperature from the one we observed in our streams to the one that is predicted by the Metabolic Theory of Ecology.

What’s the Metabolic Theory of Ecology?

It is built on the premise that metabolic rate controls ecological processes at all levels of organisation from individuals to ecosystem processes. And since metabolic rate is driven by the body size of the organism and its environmental temperature, it is predicted that metabolic rates will increase in warmer environments. This should in turn lead to more rapid growth rates of individuals, increased feeding rates on their resources, and thus changes throughout the network of interacting organisms in an ecosystem. 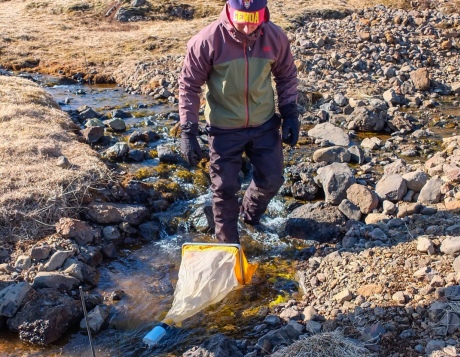 Why is it so surprising that nutrient supply was augmented by a warmer climate?

All theories have assumptions and one assumption of the Metabolic Theory of Ecology is that nutrient supply, and indeed other environmental variables, will remain constant as temperature increases. This simplifies the possible outcomes of the model and allows the sole effects of temperature on the metabolic rate (or energy demand) of organisms to be predicted with all else being equal.

Is it possible to predict what wider implications this might have in the future?

One of our collaborators from the US, Dr Jill Welter, has shown that the major contributor to increased nutrient supply in the warmer streams is nitrogen fixation by cyanobacteria (in a 2015 paper in the journal Ecology). A lot of recent research has shown that cyanobacteria are starting to thrive in cooler, high latitude ecosystems like Iceland, Greenland, Alaska, etc. This suggests that our results may apply more generally to high latitude ecosystems, which may dramatically change the species composition there. 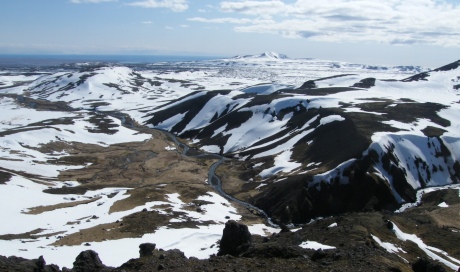 Where do you hope to take the study now and how will you develop it?

This study is really just one brick in the wall of research that I've been building in Iceland. My fellowship has started to focus on the plants and terrestrial organisms associated with soils of different temperature in these geothermally heated landscapes. We find similar patterns to the freshwater streams, which shows the generality of so many of these results even across ecosystem boundaries.

It's important that we understand all these temperature-driven impacts if we truly are to predict the consequences of climate change.

I have also started to look at the interchange of energy between these two ecosystems. Many terrestrial flies land on the surface of streams and are eaten by fish such as the brown trout, while most of the freshwater insects are only aquatic in the larval stage, but emerge into the air and forage in the terrestrial environment as adult flies. Warming has a very big impact on this flow of energy between freshwater and terrestrial ecosystems and can provide energy subsidies that can also alter many of the traditional predictive models. It's important that we understand these temperature-driven impacts if we truly are to predict the consequences of climate change.

My main collaborator at Imperial, Professor Guy Woodward, received a £3.7m grant from the Natural Environment Research Council to investigate similar geothermal systems around the Arctic Circle, including Greenland, Alaska, Svalbard, and Kamchatka in a project called the Ring of Fire. We want to test if similar patterns to the ones we uncovered in Iceland occur more generally in other high latitude locations, or if there are other factors that might be important in changing the patterns, such as different water chemistry, nutrient inputs and regional species pools.

Tell us a bit about working on field trips in this way – what inspires you about this area of research?

The field trips are always amazing experiences! I'm currently in Kamchatka, in the far eastern tip of Russia, working with 11 other fantastic people to sample the final set of geothermal streams on the Ring of Fire project. It's exciting to be some of the first scientists to sample these streams and simply document what lives there. It's a real adventure, discovering new countries and landscapes, bonding with your colleagues and making new friends with the locals along the way. It can be extremely challenging – we've had endless car troubles on gravel roads and late nights in the field. But it is immensely satisfying when you finish processing the samples and start piecing together the story in the data. The results can sometimes be surprising, as they were in this study published in Nature Climate Change, but that is where the mystery begins...trying to understand these ecological surprises and share your findings with other scientists so that we can get closer to understanding the consequences of the major changes that are happening so rapidly to our planet. Top predator trout may be able to adapt to warmer waters