The spacecraft, which was launched in 1997, has spent the last 13 years orbiting Saturn and its environment. On 15 September 2017, it will turn towards the planet and burn up in the atmosphere.

You almost feel like the instrument and the spacecraft are part of the family.

As it enters this final phase, it will send back as much data as it can back to Earth, before the signal is lost as the spacecraft breaks up. The loss of signal is expected to reach Earth around 13:00 British Summer Time, and NASA TV will be streaming the event live from mission control. You can also follow along on Twitter with the hashtag #GrandFinale.

Some of the last data received will be from Cassini’s magnetometer instrument, which was built and is led by a team from the Department of Physics at Imperial.

Principal Investigator for the magnetometer, Professor Michele Dougherty, explains the end of the mission in the video at the top of the page.

During Cassini’s mission, the magnetometer has been busy investigating the magnetic environment around Saturn. Saturn has a magnetic field, much like the Earth does, which extends far into space and protects the planet from the solar wind – the stream of charged particles coming from the Sun.

It has made discoveries including strong shock waves that could reveal the secrets of exploding stars and how Saturn's magnetic bubble explosions help release gas. 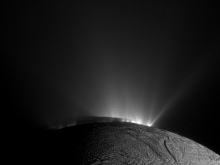 However, the highlight is undoubtedly the magnetometer’s role in discovering an atmosphere at the moon Enceladus. A surprise ‘bending’ of Saturn’s magnetic field around Enceladus spurred Professor Dougherty to suggest they fly closer to the moon on the next pass, where a strange atmosphere was detected, produced by jets of water escaping the icy surface. Enceladus now represents one of the best prospects for finding life in the solar system.

Despite these successes, one large mystery remains: how long a day is. Saturn’s busy atmosphere has obscured accurate measurements of the planet’s interior, where the magnetic field is created, which has prevented the team from discovering the length of a day.

Professor Dougherty hopes this final, close phase of the mission will resolve this, even though the data so far are perplexing.

Nevertheless, it is certain that Cassini, and its magnetometer, have had tremendous success and the end will be bittersweet. Professor Dougherty said: “Right after the burn in the atmosphere there will probably be some tears. We’ve been working together for over 20 years.

“You almost feel like the instrument and the spacecraft are part of the family. There will be sadness but also relief, as it's going to be a very intense period of time.”

After the end of the mission, join Cassini mission scientists and a host of other Imperial space researchers at the next Imperial Fringe: A Space Odyssey, on 10 October 2017.