Artificial cell design gets a boost with the launch of FABRICELL

FABRICELL, a joint initiative between Imperial and Kings College London, launched this month with a series of talks including a Nobel Prize winner.

FABRICELL is a virtual research centre that brings together over 30 research groups and aims to capitalise on the critical mass of world leading expertise in artificial cell science in London. It will consist of a series of labs across Imperial and Kings, as well as formal and informal education and research opportunities.

“Working across London is increasingly important. To make the most of this opportunity, we need to work closely and effectively together. With this in mind it’s encouraging to see the plans and ambitions of FABRICELL. It’s a great mix of basic science twinned with innovation

Designing new cells from scratch has two main aims: to provide scientists with new insights into how cells work, and to attempt to harness the power of biology to create new classes of smart micromachines.

Members of FABRICELL aim to construct such artificial cells from the bottom up, by hijacking biological machinery (such as DNA, enzymes, proteins, and lipids) and by fusing together living and non-living components. They hope the new cells will perform designated functions seen in real cells such as environmental sensing and replication.

At the heart of FABRICELL is FABRICA, a community-operated prototyping workspace that will open in early 2018 at the Molecular Sciences Research Hub, the Department of Chemistry’s new home at White City. FABRICELL will also be launching a joint new Masters in artificial cell science and will run ‘hackathons’ in partnership with the Imperial College Advanced Hackspace.

Imperial co-founder Professor Oscar Ces and King’s co-founder Professor Roger Morris also say FABRICELL will engage the wider scientific community through a keynote seminar series (Frontiers in Artificial Cell Science) and will connect with government and members of the public through the Molecular Quarter – a policy and outreach unit that aims to develop a long-term roadmap for artificial cell science and educate the public with respect to applications in this area. 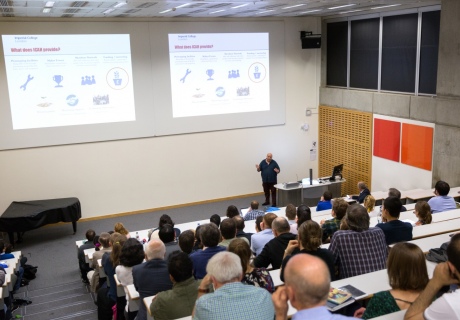 FABRICELL will also expand to support collaborations with industry through the FABRICELL industry club, technology showcases and small-scale funding for start-ups.

The launch event, held in the Sir Alexander Fleming Building on Imperial’s South Kensington campus, was attended by staff and students across College.

It was opened by Professor Nick Jennings, Imperial Vice-Provost (Research), who said: “Working across London is increasingly important. To make the most of this opportunity, we need to work closely and effectively together.

“With this in mind it’s encouraging to see the plans and ambitions of FABRICELL. It’s a great mix of basic science twinned with innovation.”

At the launch three speakers then tackled the scientific background behind designing artificial cells, and how their work is making progress in the area.

Professor Lee Cronin, Regius Professor of Chemistry at the University of Glasgow, discussed his lab’s use of experiments with liquid droplets that appear to simulate the movements of early life components. He also discussed what kind of biological complexity can be considered a biological marker, for example what kind of biomolecules we could consider to be products of life on other planets.

Professor Patricia Bassereau, from the Institut Curie in Paris, explored how cell biosystems work using a bottom-up engineering approach. She took the audience through her team’s experiments that aims to recreate cellular biomembranes, an important component of cells that allows molecules in and out, and protects the cell’s organelles and how these regulate the behaviour of proteins.

Exploring the origins of life

Finally, Professor Jack Szostak from Harvard Medical School, who won the Nobel Prize in for Physiology or Medicine in 2009, gave a keynote talk on the origins of cellular life. He explained how his work is led by a simple question: is there life beyond Earth?

Through a survey of past and present experiments, including those by his own team, Professor Szostak showed that many of the building blocks and simple processes necessary for life can be recreated. 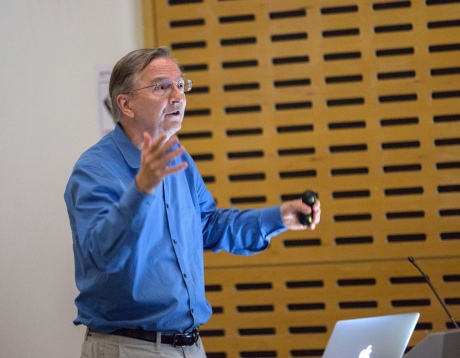 To form the building blocks, certain chemicals need to be concentrated together, and Professor Szostak described how this could happen through natural processes associated with hydrothermal activity – heat driving chemical reactions on the beds of lakes or oceans.

He also showed how these chemicals could come together and form the structures we know are the basis of life on Earth. Finally, with this knowledge, he showed that these specific conditions still exist on Earth, in places like Yellowstone, where the conditions are right to bring certain chemicals together and to cause them to react in ways that form useful structures.

While acknowledging there is still lots to be figured out, Professor Szostak ended his talk with a hopeful note. He said: “There are a lot of steps we thought were hard because we didn’t know how they worked, but now we do know how they work, they looked easy. There are still lots of steps to investigate. Everything looks hard that you don’t understand.” What is a Hackspace and why do we need one? Imperial launches its new hub for innovation at White City