Prince William was given new insights into his mental health awareness campaign at Imperial's pioneering data visualisation facility on Friday.

The Duke of Cambridge visited the College’s Data Science Institute (DSI) to see the impact of the Heads Together Campaign displayed in the Data Observatory (DO) – the largest facility of its kind in Europe. 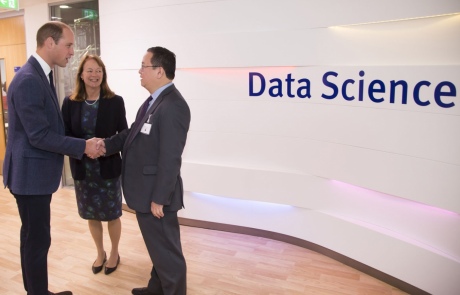 Heads Together is a mental health initiative spearheaded by The Duke and Duchess of Cambridge and Prince Harry. It aims to tackle the stigma associated with mental health and inspire people to talk more openly about mental wellbeing.

For the past two months, Imperial experts from the DSI and the Department of Mathematics, along with representatives from Heads Together, have been analysing YouGov data on emerging trends in relation to attitudes to mental health.

The team of Imperial researchers who analysed the data included Professor Yike Guo and Drs Xian Yang and David Birch from the DSI. Ms Sarah Jones, a research postgraduate from the Institute for Global Health Innovation at Imperial and an advisor to the Royal Foundation, also assisted, along with Professor Michael Crawford, from the Division of Brain Sciences, and Dr Reza Drikvandi, from the Department of Mathematics. Around 14,000 responses from 6 surveys were analysed by the team. 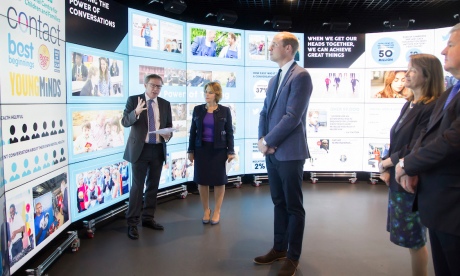 The Duke of Cambridge is briefed about the Heads Together campaign

Following a warm welcome from Professor Alice Gast, President of Imperial, and Sir Keith Mills, President of the Royal Foundation, Prince William visited the DO.

Professor Alice Gast said: “It was an honour to welcome Prince William to Imperial and to collaborate with the Royal Foundation to produce this important evidence for the Heads Together campaign. Imperial excels at multidisciplinary research and our mathematicians, computer scientists, data scientists and public health experts identified and presented key trends using the forefront analysis and visualisation technology in our Data Science Institute’s Data Observatory.” 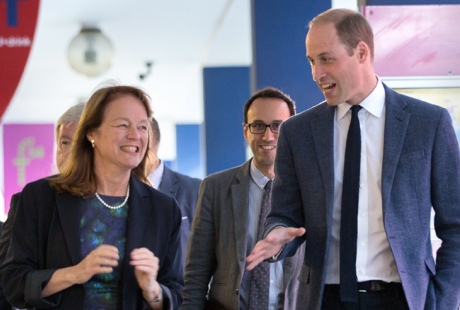 "It was an honour to welcome Prince William," said President Gast

The DO's 64 screens and 130 million pixels of surround vision provided an interactive backdrop for the presentation, which showed the progress of the campaign since its launch last year. As part of the data visualisations, Miss Jones talked about the changing trends in the nation’s behaviour and attitudes around mental health.

Opened in November 2015, the DSI's DO provides an opportunity for academics and industry to visualise data in a way that uncovers new insights and promotes the communication of complex data sets and analysis in an immersive and multi-dimensional environment.

Following today’s presentation, the Heads Together campaign will now focus on providing support to help people have those conversations, focussing on schools, workplaces, and the military, alongside other projects to be announced over the coming year.