UK can be a world leader in drone tech, says Imperial academic at lab launch

Drones in the future may make cities smarter, safer and more efficient

The "drone race" between countries is underway and the UK can be a leader, said an Imperial aeronautical engineer at the launch of a new centre. 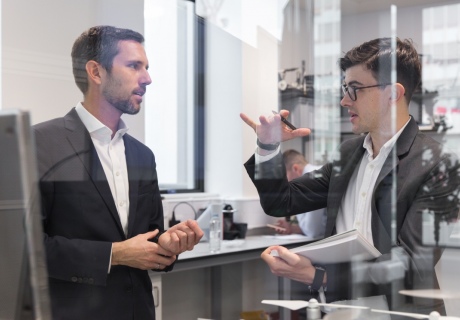 Dr Mirko Kovac was interviewed by Oliver Moody, a journalist from The Times, at the Arena's opening.

Dr Mirko Kovac is the Director of the newly opened Brahmal Vasudevan Multi Terrain Aerial Robotics Arena. The Arena is the first of its kind in Europe, enabling engineers to test the next generation of aerial robotics for urban environments and extreme conditions.

Dr Kovac, from the Department of Aeronautics at Imperial College London, said: “We see the UK at the forefront of a billion dollar aerial robotics industry, and new test facilities like the one we are opening today at Imperial will help the country to realise this ambition.”

I was very excited to hear about how drones could have a positive impact on the environment, industry and our way of life.

The researchers in the Arena can simulate different terrains in the air, the ocean and on land. The space also enables the engineers to create extreme conditions such as fire, smoke, and heat to simulate how the next generation of drones will perform in harsh environments.

“The applications are limitless. Picture a world where aerial robots could operate effectively in an extreme environment such as a deep underground mine, keeping lives out of danger. Imagine search and rescue aerial bots that could zoom out over rough seas to save lives, or deliver medicines to help those in emergency situations. We see aerial robotics as a way to improve all our lives,” added Dr Kovac.

The development of the Arena is thanks to a £1.25 million gift from alumnus Mr Brahmal Vasudevan (who graduated in Aeronautical Engineering in 1990).

Mr Vasudevan said: “I studied aeronautics at Imperial and I have a personal interest in drones, being a hobby of mine. A few years ago Professor Spencer Sherwin, who is an old Imperial classmate of mine, introduced me to Mirko and his team and I was very excited to hear about how drones could have a positive impact on the environment, industry and our way of life. It felt like a perfect fit for me in terms of a project to support. Now our shared vision is a reality and it is great to see the Arena open for research, teaching and industrial development.”

Over the past five years, Dr Kovac and his research group have been using nature as the inspiration for their prototype aerial robots.

This so-called Bioinspired approach has led the team to develop an aerial robot that takes inspiration from on the ability of spiders to make silk for their webs. The Spider-inspired Micro Aerial Vehicle (MAV) aerial robot can shoot wire from a device connected to its underbelly, which enables it to build supportive structures to perch on or to stabilise with so that it can monitor environments such as the tops of tall buildings, which are difficult and dangerous for humans to get to.

Since 2012, the team have been refining the design of a prototype drone that dives like a gannet and launches like a flying fish, to collect water samples. Gannets are the largest seabirds in the north Atlantic and hunt fish from the air before diving into the sea at up to 60 miles per hour. Flying fish can make powerful, self-propelled leaps out of the water and into the sky, where their wing-like fins help them to glide over considerable distances. The team took inspiration from these behaviours in their prototype AquaMAV robot, which is designed to collect samples in situations such as monitoring water quality in reservoirs and measuring changes in ocean salinity to gauge the effects of climate change.

In 2015, the researchers created the world’s first 3D printing aerial robot. Inspired by the nest building capability of swiftlet birds, which use saliva to build their homes, the team developed a robot that extrudes polyurethane foam to repair infrastructure components. One possible application is in the oil industry where swarms of swiftlet MAVs could fly out to remote locations to repair leaking pipes.

Dr Kovac’s research lab has also been forging ahead in creating partnerships with other research groups, academic institutions, and industry.

In February 2016, the group received more than £3.4 million in funding from the Engineering and Physical Sciences Research Council and industrial partners to develop aerial construction-bots, equipped with 3D printing technology, which excretes materials that can be used to repair or build structures, with huge potential in disaster relief.

Dr Kovac has also co-founded the London Robotics Network along with King’s College London and the company Shadow Robots, with funding support from the government’s Innovate UK, to develop a regional aerial robotics cluster.

The research group has also been winning awards. In 2016, their ‘Buildrone’ team took first place in the United Arab Emirates’ Drones for Good Award for their Swiftlet Mav, beating more than 1000 entries from across the globe.

Postgraduates from the Dr Kovac’s lab are also beginning to make their mark in the world. For example, research postgraduate Mr Talib Alhinai was made a laureate in the MIT Technology Review’s 35 Innovators Under 35 2017