Professor Alice Gast encouraged graduands to work with their communities to "inspire hope and confidence" at today's Commemoration Day ceremonies.

More than 2,300 students from over 50 countries will receive their undergraduate degrees on stage at the Royal Albert Hall during today’s ceremonies.

They will join an international network of 200,000 alumni worldwide.

Addressing the audience of graduands and guests, Professor Alice Gast said:  “The opportunities for you to contribute to society abound. You have much to offer. The need for people with your intelligence, passion and commitment to learning is unending. 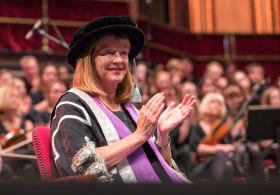 “Some think universities are elite institutions that are not relevant to them. We have a responsibility to change that perception.  We need to do more to share our world of innovation and discovery, and we need to find new ways of doing this.

“Last year, Imperial students devoted over 25 thousand hours across more than 150 community groups. I urge you to carry this volunteer spirit with you. Find ways to contribute to society by working with the communities where you live and work.” 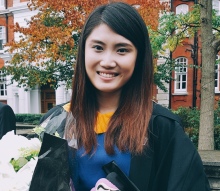 Yi Hui, who has completed a Biology BSc, said: "My Imperial experience has been amazing. I took part in a lot of extracurricular activities, such as playing the trumpet in the Orchestra. I got to know so many people from all over the College. One thing I've learned is to not be shy, be brave and speak up." 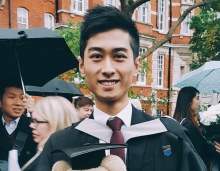 Justin To, graduating with an MEng in Mechanical Engineering, said: "At Imperial I've done things that I wouldn't have imagined I could do before. I sat on the committee for the Public Awareness and Social Service Society. I joined a variety show, where I was one of the main actors. And I've been doing drama, as well as some singing, that I had never done in secondary school. I've met a lot of lifelong friends. It's been one of the highlights of my Imperial life. 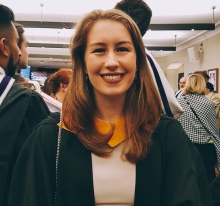 Catherine Evans, who completed an Intercalated BSc in Reproductive and Developmental Sciences, said: "I study Medicine at the University of Birmingham, but I came to Imperial for the one year intercalated BSc programme. The course was exactly what I wanted it to be. Everyone was so friendly and welcoming, which was lovely. And I got to spend a year in a great city, at a great research facility. It's a fantastic experience." 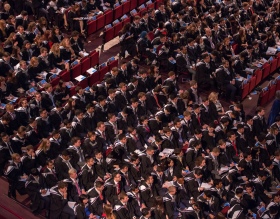 In 2017, Mr Aguilera co-founded InAGlobe, which aims both to find engineering solutions to problems affecting people living in the developing world, and to enhance and broaden the education and experience of students.

Recently, Mr Aguilera travelled to Mozambique with the co-founders of InAGlobe – both Imperial Engineering graduates – to meet with NGOs and universities, to help create a platform that will help identify key challenges affecting society that could be brought back to Imperial as student projects.

The College will confer honorary degrees on the following people:

Professor Sir Nicholas Wright is Professor of Histopathology at Barts and the London School of Medicine and Dentistry at Queen Mary, University of London, where he leads the Centre for Tumour Biology.

Elected as a Fellow of Imperial’s Faculty of Medicine in 2011, Professor Wright has served as the Deputy Principal and Vice-Principal for Research at the Imperial School of Medicine and as the Dean of the Royal Postgraduate Medical School, which became a part of Imperial in 1997.

His studies into the early origins and biology of life-threatening tumours promise to lead to new treatments for various types of disease affecting the gut, and broaden our understanding of the role of stem cells.

Professor Wright receives an Honorary Degree of Doctor of Science in recognition of his outstanding contribution to medicine.

Professor Richard Parker, Chair of the UK Aviation Technology Strategy Group and of the Governing Body of the EU’s Clean Sky project, Visiting Professor in the Department of Mechanical Engineering at Imperial, and a Distinguished Visitor at the UK National Physical Laboratory.

Until 2016, he was Director of Research and Technology at Rolls-Royce, where he was responsible for the company’s global technology portfolio for over fifteen years and was a central figure in the development and implementation of the international network of Rolls-Royce University Technology Centres.

Professor Richard Parker receives an Honorary Degree of Doctor of Science in recognition of his outstanding contribution to UK science and technology.

The following people will receive Imperial College medals in recognition of their considerable contributions to the life and work of the College:

Professor Sir Anthony Newman Taylor, Director of Research and Development for the National Heart and Lung Institute and President’s Envoy for Health, a valued and influential Imperial ambassador on both the national and international stage.

Ms Rosie Shaw, Policy and Planning Officer in the Faculty of Medicine, who is celebrating 20 years at the College and has been key to a number of notable achievements in the Faculty, including establishing its Digital Communications Team.

Professor John Kilner, BCH Steele Chair in Energy Materials and former Head of the Department of Materials, for his outstanding contribution to materials science, technology and industry over the past 30 years.

Mr Kevin Cope, whose 40 year Imperial career saw him joined the College in 1976 as a trainee science technician before holding a number of roles, culminating at his retirement in 2017 as Head of Building Operations.

Professor Denis Wright, who has supported thousands of students over the past 40 years through his roles as Dean of Students, Director of Student Support and College Senior Tutor.

Mr David Featherbe, Chief Teaching Technician and Safety Officer in the Department of Life Sciences, whose help and support has enhanced the experience of many students, and who has encouraged a new generation of students to consider science through involvement in summer schools. 'Maintain your global outlook', Imperial's President tells graduating students. 'Take all you have learned and put it to work,' President Gast tells graduands