A study lead by researchers from Imperial College London has identified an important link between a particular ion channel on the body’s pain receptors – or nociceptors – involved in burn injuries and the way we process pain information. Pain management in burn injuries has presented itself as a major challenge for clinicians.

In a paper published this week in the Journal of Molecular Medicine, scientists from the Department of Surgery and Cancer’s Nociceptive Group have shown that a toxin isolated from a tarantula was able to alleviate pain by selectively blocking the Nav1.7 channel. This finding could potentially lead to the development of novel pain medicine for burn injuries.

Our research is one of the first to show effectiveness of Nav1.7 blockade to tackle pain, in this case associated with burn injury

Burn pain – the result of an uncontrolled transfer of thermal energy to the skin in amounts that cannot be tolerated – is often described as one of the most unbearable pain perceptions that can be experienced. Dr Jose Torres-Perez, co-author of the paper who completed the research as part of his PhD with the Nociceptive Group based at Chelsea and Westminster Hospital, said:

“Pain associated with burn injuries is one of the most important outcomes that still concerns burn survivors. It is complex and requires a multidisciplinary approach. Nonetheless, effective management of burn pain is difficult and one of the most complicated aspects of burn injury.”

We feel the sensation of pain when signals are transmitted from the body to the brain by specialised sensory neurons called nociceptors. Tiny membrane proteins that sit on nociceptors respond to different types of painful stimuli. In response to a hot stimulus such as flames, a particular type of sodium channel called Nav1.7 will open and allow an electrical current to flow in and out of the cell in the form of charged ions. This in turns initiates an action potential to travel along the length of the nerve and transmit the pain signal to the brain. 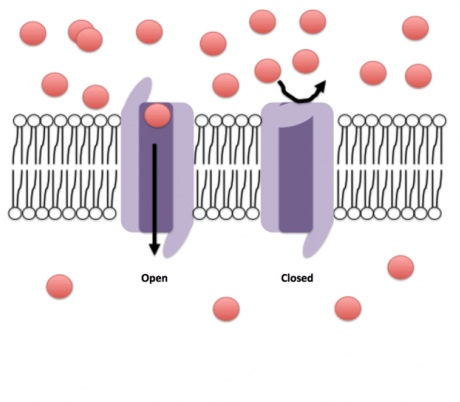 When the channel is open it allows the flow of ions (red circles) through the cell membrane.

There are nine different subtypes of sodium channels that traverse the surface of nerve cells, but pain researchers have recently focused their attention on Nav1.7. The study confirmed this channel’s essential role in pain associated with burn as they saw an increased activity of Nav1.7 in a rat model of burn pain.
Commenting on Nav1.7 as a target, Dr Jose Torres-Perez, said: “Nav1.7 has been on the horizon as a novel target for analgesic purposes for some years now. Many trials have tested for a variety of pain pathologies, without much success. Our research is one of the first to show effectiveness of Nav1.7 blockade to tackle pain, in this case associated with burn injury.”

In an attempt to block the activity of this sodium channel and in turn relieve pain, the team decided to use protoxin II – a toxin isolated from the venom of the Peruvian green velvet tarantula – since it can selectively block Nav1.7 over other sodium channels. Compared to current opioid treatments this method of blocking the pain exhibits fewer side effects. Despite the importance of tarantula toxins in the laboratory, it’s unlikely to make an appearance in the clinic since its blocking effect wares off quickly.

The collaborative study included researchers from Imperial’s Nociceptive Group which is part of the Section of Anaesthetics, Pain Medicine and Intensive Care and led by Dr Istvan Nagy, as well as researchers from Charles University Prague and The Czech Academy of Sciences. According to the researchers, the study demonstrates that Nav1.7 is an important channel for nociceptive processing after burn injury and that its blockade appears to be a more efficient pain controlling strategy with fewer side effects than opioids. Drugs that can block Nav1.7 are currently being tested in clinical trials and may be of benefit to control burn pain once tested safe, which the Group hope to explore in future studies.

This research was funded by CW+, the charity for Chelsea and Westminster Hospital NHS Foundation Trust.