With over 2500 members, the Imperial College Advanced Hackspace has grown to become one of the largest networks of makers and innovators within any university in the world. Ahead of the launch of a new, dedicated Hackspace facility for prototyping and collaborative working at the Invention Rooms in White City, we spoke with Advanced Hackspace Fellow Larissa Kunstel-Tabet.

You’ve had an interesting career in engineering and a long association with Imperial. Tell us more. 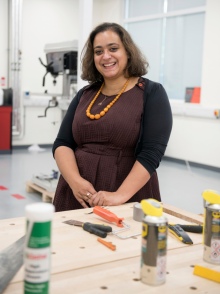 I think I’ve always had a passion for making things – and fixing them. In fact my first proper job after school was a year in industry working for a firm called Tube Lines, upgrading the London Underground rail network. I then came to Imperial to study for an undergraduate degree in Mechanical Engineering, graduating in 2010, before going on to do a joint masters in Innovation Design Engineering, at Imperial and the Royal College of Art, which I completed in 2012.

Immediately after finishing at Imperial, I started working for the BBC, on Dara Ó Briain’s Science Club, on a segment called ‘How things work,’ where we had to explain in lay terms, often with props, how a fridge works or how a shotgun works.

I then started working for a fashion technology company as Technical Project Manager working high end and bespoke technology-embedded fashion. We made dresses for Lady Gaga – one had flowing LEDs that looked like veins and pulsated to the music; another had moving motors parts so it would reflect the light in certain ways; and a third had bespoke bubble machines embedded within it. Perhaps the most ambitious was one that flew; we had to basically invent a giant drone which could hold and transport the human body and look great. That job was essentially about very intricate engineering applied to the challenging context of the human body, and working with amazing fashion designers, engineers and material technologists to bring it all together.

I came back to Imperial in January 2014, gearing up for the formal launch of the Advanced Hackspace later that year.

How has Imperial changed over 10 years?

When I was an undergraduate student I felt that the climate was quite different. One of the main reasons I came to Imperial was that I believed the mechanical engineering workshop would be open late in evening for personal projects. Unfortunately, unavoidable contractual issues prevented that from happening, and while the course gave me a solid theoretical grounding, I still craved for more personal hands-on making outside of the taught class structure. That eventually came with the Innovation Design Engineering course, which was an intense two-years where failing at things was encouraged as part of the innovation process – a somewhat alien concept at Imperial at undergraduate level. We’ve now trying to incorporate that element of experimental learning into the undergraduate programme through Hackspace initiatives, hackathons and our Horizon module on Introduction to Making & Prototyping.

What was it like in the early days of the Advanced Hackspace? 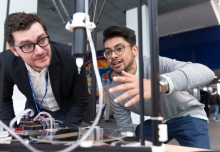 Well in 2014, Dr Nick Jones and Professor Peter Childs had just secured a £380,000 EPSRC Award, to create the Hackspace; but we had no secure space, no office and no real equipment! There was a lot of talking with different Departments … and basically begging – ‘please can we put a printer in this corner of your workshop?’ In the beginning so much of it was a knock on someone’s door, and the first question people would ask was ‘What department are you under?’ But what we were trying to create was unified spaces, where staff and students from say the biological sciences could go and use engineering workshops, or conversely engineers to use wet labs. It's thanks to academics, staff and students who could see the potential of the hackspace that we have been enabled to accomplish so much on the South Kensington and Hammersmith campuses, namely through Design Engineering, EEE, Chemistry, Mechanical Engineering and at the NHLI; as well as support from central faculty and engagement with enterprise and outreach.

Since then the Advanced Hackspace has grown wonderfully. We have a phalanx of good spaces and facilities around South Kensington and now the new Invention Rooms at White City; a community of over 2500 members of the Hackspace, around six Hackspace Fellows, academic and student champions and Hackers in Residence. The latter are often alumni entrepreneurs needing access College facilities and in return they give 20% of their time back to the community, either as a "technician", mentor or participating and helping in member activities and student societies.

What have been the notable success stories? 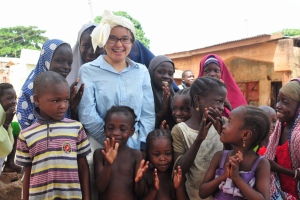 There have been countless successful ideas. A recent one that springs to mind is Kitty Liao, one of our Hackers in Residence. She has boundless energy and is working on a project called SMILE (smart last-mile vaccine cooling system), which aims to counter the problem that many vaccines and blood products are degraded and rendered useless in their last mile of transportation, especially in hot environments where they are most needed, for example in sub-Saharan Africa.

But perhaps more importantly than the individual successes is the development of this spirit of independent experimentation and helping build skills that members wouldn’t necessarily gain in their normal studies or main role. The Hackspace encourages people to tinker with the equipment, within the boundaries of safety. For example, if they’re using a 3D printer and they get stuck, we don’t have technicians to come and fix it, we encourage our members to learn how to fix it, and by doing that they’re learning how to make and learning those new skills. If they become really stuck they can ask other members of the community, or in the last resort we help to teach them. But we’re not a service, the fellows support a community of inventors: it’s about people thinking through making and learning how to do it themselves and having fun at the same time.

How will having the dedicated space at the Invention Rooms help things? 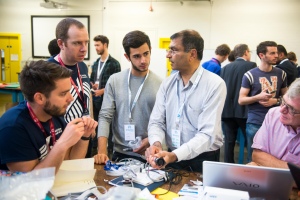 I think it will be transformative. Of course it has some top-notch equipment and facilities, but I think most importantly it will allow larger groups to come together for regular meet ups – something we’ve struggled to do at South Kensington – and allow us to offer co-location facilities for our external partners. What we’ve managed to achieve here given the constraints is fantastic, but the distributed nature of it means we’ve never really been able to gather any more than say ten people at once. We have our die-hard members who are always in our spaces and great focal points for building our nascent community, but the dedicated space in the Invention rooms allows us to co-locate our technologies and grow the community to support, respect and inspire one another at every opportunity. The first instance of this will be through our 'HackMondays' where we'll get the tools out and make until late.

The Invention Rooms will also be a step change for our already successful hackathons, the latest of which, run in conjunction with BP and Amazon, explored the potential ways of using voice activated technology to connect with consumers. This has always been a great opportunity to invite people from diverse backgrounds from STEM and beyond to engage with ideas and prototyping to solve a problem.

What else can we expect?

Currently I’m working on a new collaborative pipeline that is designed to support the growth of start-ups in the college ecosystems. This links together the activities of the Hackspace. Touchstone Innovations (formerly Imperial Innovations), the Enterprise Lab and the Incubator at the i-HUB at White City and will enable science and technology ventures to seamlessly move between these spaces and benefit from their infrastructure and expertise. Our aim is to make Imperial the best place in the world to turn ideas into a reality.

With the Invention Rooms facility we are also exploring new ways of working with our industrial partners, SMEs and alumni to access the facilities we have in White City. Since we started out we have seen a rapid rise in the demand from SMEs and large industry to co-locate with us and White City. Some companies are looking for advice on designing hackspaces, others want to exploit our disruptive technologies, others want to tap-into our innovation frameworks. The diversity of need is really exciting and something we can now accommodate through residencies? we can give them a desk so they can find out themselves. That also allows cross-pollination between industry and students which is beneficial since a lot of students don’t know where they want to go after graduating and if you’re already building a rapport with someone that helps direct focus.