The Reach Out Makerspace is a pioneering community and Outreach initiative at the new Invention Rooms at Imperial's White City Campus.

The Invention Rooms – the first facility of its kind in the UK – represents a new and unprecedented approach to community engagement and outreach, combined with cutting-edge research and innovation all under one roof.

Based within The Invention Rooms, the Reach Out Makerspace provides local young people with free hands-on experience of designing and prototyping. We met up with Makerspace Programme Coordinator Kate Mulcahy to find out more.

Imperial has made great strides in its outreach, but the Makerspace is quite a significant development of that isn’t it? 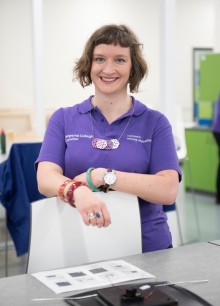 It is. The focus of Imperial’s outreach to date has been on raising attainment and participation in STEM subjects, and the existing Outreach space, the Wohl Reach Out Lab, has been an active part of that. The overall aim being supporting a diverse range of student to achieve their potential. .

The Makerspace programmes are more open-ended and community-focused in their aims. We want to create a space and suite of activities where the students can develop their skills and confidence in making. What they do with those skills is up to them really, it might well lead to third-level education and university but equally it might be an apprenticeship or some entrepreneurial venture.

In White City, there’s a growing entrepreneurial culture, for example with Imperial’s i-Hub for start-ups, but what we’ve learned is empowering that self-belief needs to start a lot earlier. 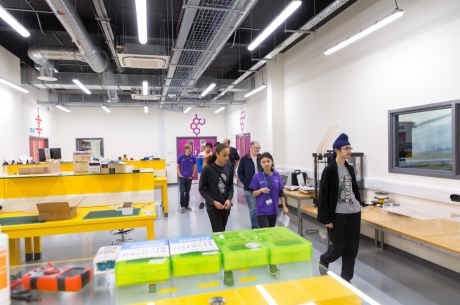 The Reach Out Makerspace

What will be the first initiatives?

With the support of our funders Berkeley and Elsevier, we are running a 12-week Maker Challenge Programme for 14-18 years-olds, focussing on participants from widening participation backgrounds -  those who potentially face obstacles in advancing their education, for example due to household income being below a certain level. They come from schools in the local area − some of whom we already have existing relationships in place with − and they are encouraged to sign up. But it is ultimately their choice.

"I'm a tinkerer in the purest sense; I don’t believe in elitism in making"

There are 20 pupils in our first cohort. We held two, full-day intensive Saturday sessions earlier this month, where we did lots of ideating − basically training in ideas generation and development, brainstorming, refining and critiquing.

Then they come in once a week on a Thursday from 4.30pm to 7.30pm. We do crash courses in using the equipment and machines, so the first session was woodworking; then they did Computer Aided Design (CAD); next week is laser cutting; after that 3D printing; then programming using microcontrollers like Arduino and Raspberry Pi; and electronics. After the training there will be three open sessions when they can develop their own project. As long as they’ve done the induction and training, they’re allowed to use all the equipment, supervised by a leader who is a subject specialist.

How have they found it so far? 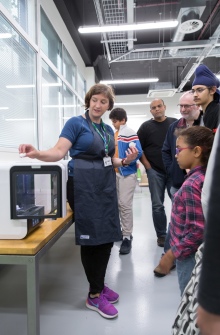 Fantastic overall. I think the ideation sessions were quite an awakening for them in terms of mind-set, because they are accustomed to thinking in terms of right and wrong answers to problems. Whereas we are just looking for creative and novel ideas. But I think they quickly got the hang of that. Some of the students are now starting to think about their final projects and we have some diverse and ambitious ideas. One of them is working on scale prototype fire safety system for tall buildings, where in the event of a fire, foam is ejected from the base of the tower allowing people to jump to safety. Of course, this was a direct response to the Grenfell tragedy which is within sight of the Invention Rooms and has affected all of the students in some way.

I think it’s important to point out that, while some of the schools we’re dealing with do have design technology (DT) departments, many have sold all their equipment due to cut backs, which is heart-breaking. So they need more hands on experience and constructivist learning.

What else have you got planned?

In January, we will take on another larger cohort of 40 students in the Maker Challenge. Then in the summer we’ll do an intensive two-week version of the course, so within a year we’ll have 100 individuals having gone through that programme.

Also, in January we’ll have a parallel programme running called Mega Maker Challenge (a provisional title) for a younger cohort of 11-14 year olds, which will involve three days in the Makerspace with the addition of auxiliary sessions in schools.

Lastly, there’s the Schools Challenge Programme run in partnership with JP Morgan, working with nearly 150 students from tendifferent schools, who will come in and work on their challenge of improving lives in cities

How did you come to be involved in a programme like this?

I’ve been with Imperial’s Outreach team for the six months now. Before that I worked on Royal Institution’s outreach programme, devising an initiative to get our expertise and content out of the Mayfair HQ and into communities around the UK. Whilst there I also worked on three Christmas Lectures. I’ve also worked at the Science Museum and I taught at primary and secondary schools.

I’m not a trained engineer, but I’ve always been interested in making – a tinkerer in the purest sense. I’m trying hard to make the space like that. I don’t believe in elitism in making.

What would be the long-term vision for the Makerspace?

Already word of mouth is spreading and that’s exactly what we wanted to happen. We have had people come in independently of the programmes and ask about making, and we’ve tried to accommodate that where possible and get them trained up. Ultimately, we’d like to be a sort of ‘making library,’ where people can visit and use the equipment more freely. And we’d also like to explore a way to bring in adults, for example a 40-year-old single mum with an idea for a product as we had the other day.  At the moment we don’t really have the capacity in place for that. In the medium-term we’ll be developing our large interaction zone for the community (which is joined to the Makerspace), for example with a café and possibly local food stalls. Once we get the community in there, we can find out what they actually want in terms of making aspirations.