A two-in-one solar bio-battery and solar panel has been created by researchers who printed living cyanobacteria and circuitry onto paper.

Cyanobacteria are photosynthetic micro-organisms that have been on Earth for billions of years. They are thought to be the primary reason why the Earth’s atmosphere is oxygen rich.

Imagine a paper-based, disposable environmental sensor disguised as wallpaper, which could monitor air quality in the home. When it has done its job it could be removed and left to biodegrade in the garden without any impact on the environment

Now, a team has demonstrated that cyanobacteria could be used as an ink and printed from an inkjet printer in precise patterns onto electrically conductive carbon nanotubes, which were also inkjet-printed onto the piece of paper. The team showed that the cyanobacteria survived the printing process and were able to perform photosynthesis so that small amounts of electrical energy could be harvested over a period of 100 hours.

A bio-solar panel made in this way, the approximate size of an iPad, could power a simple digital clock, and in separate experiments, a small LED light bulb.

The researchers from Imperial College London, the University of Cambridge and Central Saint Martins suggest their breakthrough could lead to new types of electrical devices that are made from paper and printed photosynthetic bacteria. These could include disposable power supplies integrated into paper-based sensors for monitoring patients with diabetes or devices that resemble wallpaper but are in fact environmental sensors for monitoring air quality in the home.

Dr Marin Sawa, a co-author from the Department of Chemical Engineering at Imperial College London, said: “We think our technology could have a range of applications such as acting as a sensor in the environment. Imagine a paper-based, disposable environmental sensor disguised as wallpaper, which could monitor air quality in the home. When it has done its job it could be removed and left to biodegrade in the garden without any impact on the environment.” 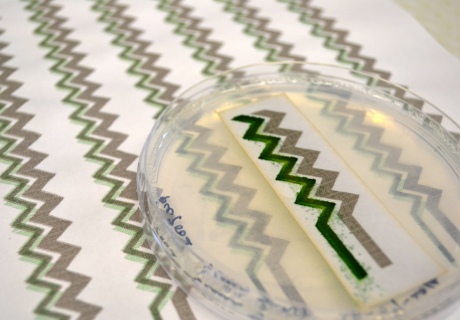 The bio-solar panel could resemble wallpaper (pictured), but is in fact an environmental sensor for monitoring air quality in the home.

The solar bio-battery pushes forward research into a new type of renewable energy technology currently being developed by scientists globally called microbial biophotoltaics (BPV). It exploits the ability of cyanobacteria and other algae that use photosynthesis to convert light energy into an electrical current using water as the source of electrons.

One of the advantages of using BPVs to harvest energy from cells like cyanobacteria is that they can produce small amounts electricity in daylight and carry on producing it even in the dark from molecules produced in the light.

Some of the current limitations that scientists have previously faced when developing BPVs are that they are expensive to make, have low power output, and a short lifespan. All these drawbacks have prevented scientists from being able to scale up the technology to an industrial level.

The team says their approach of using an off-the-shelf inkjet printer to construct BPVs demonstrates a potential method for easily scaling up the technology, which may pave the way for its wider use.

Dr Andrea Fantuzzi, a co-author of the study from Department of Life Sciences at Imperial College London, said: “Paper-based BPVs are not meant to replace conventional solar cell technology for large-scale power production, but instead, could be used to construct power supplies that are both disposable and biodegradable. Their low power output means they are more suited to devices and applications that require a small and finite amount of energy, such as environmental sensing and biosensors.”

The researchers suggest BPVs could be used in new forms of sensors built entirely from paper, which would mean that they are cheaper and more cost effective to make with less impact on resources and the environment.

Another example for BPVs, suggest the team, is in the healthcare industry.

Dr Andrea Fantuzzi said: “Paper-based BPVs integrated with printed electronics and biosensor technology could usher in an age of disposable paper-based sensors that monitor health indicators such as blood glucose levels in patients with diabetes. Once a measurement is taken, the device could be easily disposed of with low environmental impact and its ease of use could facilitate its direct employment by the patients. Furthermore, this approach has the potential to be very cost-effective, which could also pave the way for its use in developing countries with limited healthcare budgets and strains on resources.”

The current paper-based BPV unit is a palm size. The next step will see the team scale up their proof-of-concept to A4 size to determine the electrical output on a larger scale.

Professor Christopher Howe, a co-author from the Department of Biochemistry at the University of Cambridge, added: “This is an exciting proof-of-concept. The challenge now is to make panels that are more powerful, long-lasting and robust.”